Two events, ten thousand miles apart: in the Pacific, French nuclear tests on Mururoa Atoll; in London, the award of the Turner Prize to the pickled-sheep shock-artist Damien Hirst. Could there be a connection?

In the days since the Turner Prize ceremony the British art world has been abuzz with rumours about Inga Kropp and Göran Sirkel, the reclusive Wiltshire-based environmental artists—passed over once again in the nominations for the Prize. Followers of the Kropp-Sirkels have noted a recent diminution in the long run of cornfield pictograms appearing on Salisbury Plain, in Britain’s West Country, where their studio is located. And the co-founders of the Plasma Vorticist school have broken their silence to announce a radical new project.

“Damien Hirst should acknowledge his debt to us,” runs a posting on the Kropp-Sirkel website. “Without our customised corn fields he would never have been able to develop the characteristic features of his work. There would be no sharks in 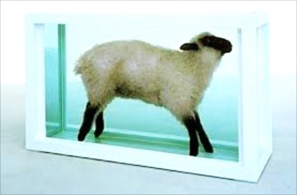 formaldehyde. And no pickled cows or sheep.”

“We were the pioneers in the use of animal cadavers as an artistic medium,” the statement continues. “They were a byproduct of the plasma vortex process that we used to create some of our early cereal-flattening experiments.”

“The plasma-vortex process links nocturnal paraphysical energies to animal traction,” the Kropp-Sirkels explain. “We became aware of this when a sheep and a sheepdog involved in our initial pictographic work became trapped in a force field and vanished during a sculpting exercise.”

“The dog eventually reappeared in Cornwall—achieving media celebrity as the Beast of Bodmin. The sheep was never found. But it’s clear that the sheep—and possibly other animals trapped in the energy fields—were recycled in Damien Hirst’s early pieces.”

“As founders of the Plasma Vortex school,” say the Kropp-Sirkels, “we are always pleased to welcome new followers. From the Plasma Vorticist point-of-view, art events can be created by anyone, in any medium—including live organic material, or, indeed, hot air.”

“Our cereal pictograms, in Wiltshire and elsewhere, form a record of our earlier engagement with this expanded range of available media—an innovation we consider comparable in historic significance to the development of perspective, or the discovery of the lost wax process.”

At this point the Kropp-Sirkels strike a warning note.

“As artistic innovators,” their posting continues, “we have been victims of the elitist conservatism of the British art establishment. Typical of this irrational hostility are the obstacles placed in the way of correct attribution of our cornfield pictographic works—which are, evidently, our own signatures inscribed on the agricultural landscape in Plasma Vortex script.”

“It is not just Damien Hurst who has borrowed key elements of Plasma Vorticism,” the Kropp-Sirkels add. “Another example of derivative work is the use of the symbol

, which was borrowed from the Plasma-Vorticist syllabary by the artist formerly known as Prince. He, likewise, owes us an acknowledgment.”

“But now we are moving on,” say the Kropp-Sirkels.

“Our work up to this point has been constrained by the limited dimensions of field sculpture. Recently, therefore, we shifted the emphasis of our projects from cornfield pictograms to larger-scale earth works. Our first major installation—a new vehicular road at Twyford Down—was systematically misrepresented by members of the art establishment, who connived in its destruction by so-called environmental protestors.”

“So—like Paul Gauguin before us—we have been compelled to seek an artistic home elsewhere. In the French Ministry of Defence, we believe we have finally found an institution courageous enough to support our ideas. And today we are proud to unveil our new work under its aegis: the Muroroa Reef Project.”

“This project will give all those with internet access the chance to observe organic evolution itself—the art of nature. As generations of organisms are born, mutate and die, live feeds from videocams installed on the atoll will show the differential effect of nuclear emissions on reef fish, sharks, turtles, coral, plankton—and the occasional environmental protester.”

“Damien Hirst’s pickled sheep and sharks are dead,” the Kropp-Sirkels conclude. “The Turner Prize is dead. Most of the Muroroa reef will soon be dead too. But in death it will be transfigured. And Plasma Vorticism will finally receive its due as the modern world’s pre-eminent art movement—and its last.” ✭