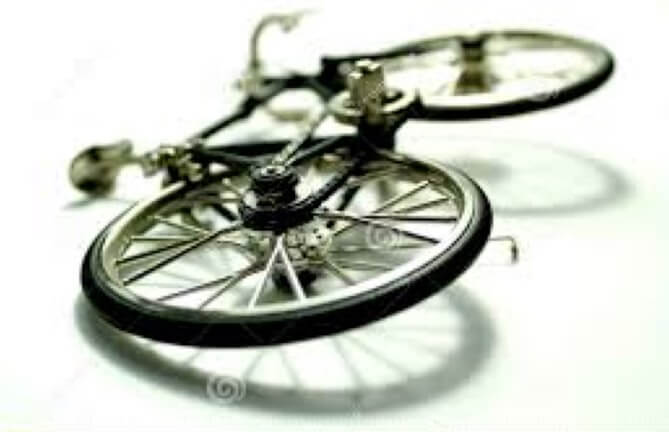 For too long—for far too long—a vociferous minority group has held sway over public opinion in this country, ruthlessly stifling debate and preventing discussion on an issue of vital concern. Protected by a coterie of politically correct lobbyists and commentators, this tightly-organised interest group has systematically manipulated press coverage and skewed received opinion.

Now, at last, a brave voice has defied the conspiracy of silence.

I refer, of course, to the courageous Mr Roy Hattersley and his recent, ground-breaking tirade in The Guardian against that scourge of the public highway, the cyclist.

In his taboo-breaking article Mr Hattersley reveals how, under the guise of environmentalism, these two-wheeled vandals have unleashed a reign of terror in our city streets. He and his dog, Buster, he says, can no longer cross the road without feeling under threat from them. The kamikaze cyclists, as he aptly calls them (for are they not consumed by a fanatical, self-destructive urge to put themselves in the path of trouble?) are lawless, he says. They are homicidal.

As he points out with rare perceptivity, cyclists have been known to ride on the pavement. They have been seen jumping the lights. And they are to be found, he reports even more alarmingly, “all over central London, bouncing up and down the kerbs, dodging the waste-bins and making sharp turns round old ladies with walking sticks.”

In a moving passage Mr Hattersley accords us a tragic, Yeatsian vision of his own imagined demise at the hands of one of these hit-and-run cyclists on the pedestrian crossing at the foot of Constitution Hill in central London. It’s a scene that he evokes with heart-rending pathos.

He and his faithful dog—a perfectly-trained companion animal, one that has surely never fouled a footpath, kept a street awake with barking, bitten a postman, or killed, say, a defenceless goose—are brutally crushed beneath the pedals of a devil-may-care ten-speed racer. Mr Hattersley’s wheeled assassin, he supposes, will be dressed in “thigh-hugging lycra”. Alternatively, he surmises, this terrorist of the public highway may have ingeniously disguised themselves as a normal human being “in a bowler hat and pinstripe suit”.

Such a scenario, we are relieved to report, has not actually come to pass. In fact Mr Hattersley has himself—thank heavens—so far not actually encountered in person any of the two-wheeled vandals whose anti-social character he so aptly analyses. This makes his public stand all the more admirable: he speaks not just for himself but for all those upstanding and civic-minded road-users—the minicab operators, the boy racers, the drivers of 20-tonne articulated trucks—whose peaceful and mutually agreeable enjoyment of our streets is ruined by the ruthless road hogs on their two wheels of steel.

As George Orwell so sagely put it, four wheels good, two wheels bad. The pedal-mad delinquents are clearly mass-murderers, in intent if not in fact. If the kamikaze cyclists of Constitution Hill have not actually killed anyone yet, it can only be a matter of time. The assertion that cyclists themselves form the majority of victims of such traffic accidents should be seen clearly for what it is: a cunning ploy to win public sympathy.

Clad in the distastefully bright coloured clothing that Mr Hattersley so aptly excoriates, dawdling on the public highway, these self-styled cyclists seriously distract drivers of motor vehicles. This causes high stress levels in motorists, provoking justifiable indignation—so-called “road rage”—and resultant accidents. The effect of such accidents is to obstruct traffic, causing endless difficulty to our police force and emergency medical personnel, dedicated public servants whose work is hard enough without the additional burden of recovering the bodies of unregenerate cyclists who contrive to get crushed—entirely through their own fault—under the wheels of passing motor vehicles.

Homicidal mania is not all these sociopaths are guilty of. They are worse than this. In Mr Hattersley’s judicious phrase, they are self-righteous. Indeed, homicide is a mere peccadillo beside the odious belief of these cyclomaniacs that they actually have a right to use the public highway, where their repulsive antics are conducted in full view of children.

Mr Hattersley has incisively located the true source of the carnage on our roads. Not the honest, hard-working drivers of cars and lorries, but these self-righteous cyclists in their distracting bright clothes. He has cleared the stain on the reputation of the innocent drivers who have been so unjustly blamed for road accidents. In doing so he has performed an important public service: his is the first blast of the hooter against the monstrous regiment of cyclists.

But does Mr Hattersley go far enough? With his instinctive reasonableness and moderation, it seems, he draws back from the obvious conclusion. Clearly something has to be done about the menace of cycling. Cycling must be banned. What better way for the government to show they are serious about tackling national decline than by nipping cyclistic tendencies in the bud, and restoring the ancient compact between men and cars?

We must be tough. Tough on cycling. Tough on the causes of cycling. Yes, we are a tolerant society. But cycling in public is simply not acceptable to civilized people. The rise in this abominable practice must be met with the full force of the law. Along with a country-wide ban on brightly-coloured lycra.

We may, in due course, consider permitting adults of an unregenerate cycling tendency to practice their vice in private. But they must be prevented from doing it in the road and frightening the lorries. ✭

I laid the irony on pretty thick, but not all readers got it. Perhaps I shouldn’t have name-checked John Knox’s The First Blast of the Trumpet Against the Monstruous Regiment of Women (1558), which is a non-ironic attack on female monarchy, at the same time as invoking Jonathan Swift’s A Modest Proposal  (1729), a satirical critique of Britain’s Irish policy and general attitudes to the poor.

There were attacks on my piece in two cyclists’ newsgroups. “I had to check I wasn’t reading The Daily Mail,” said one. (This reader may not have reached the end of the article.) I was beginning to think cycling advocates must have no sense of humour at all—in addition to the other misdemeanours they stand accused of. But the Hackney branch of the London Cycling Campaign came to the rescue, featuring a version of the piece on their website, with the following introduction:

This article appeared recently in The Guardian in response to an oh-so-original anti-bike article by some loser called Roy Hattersley. John Ryle tells Cycling in Hackney, “The anti-bike piece is an established genre. It’s a particular favourite of elderly columnists: Keith Waterhouse did one a couple of years ago. But the anti-anti-bike piece, being not so well established, may invite misunderstanding.”

The magic of bioelectricity

It’s not a new age pendant that Cherie Blair needs for protection; it’s an Angolan...