Last month in Yirol I bought a heifer—a brindled two-year old, not yet in calf. In the cattle-naming system of the Muonyjang – the Dinka people – a cow like this is called nyang, the crocodile, a reference to the colour-pattern of her hide. I bought my nyang at the livestock auction on the edge of Yirol town, the administrative centre of Eastern Lakes state, in South Sudan’s pastoral heartland. The cattle for sale were tethered to pegs in a fenced enclosure; the handsomest animals were on parade outside. There were several fine heifers with their calves, and oxen with the black-and-white colour-patterns that Dinka livestock owners value beyond all else. 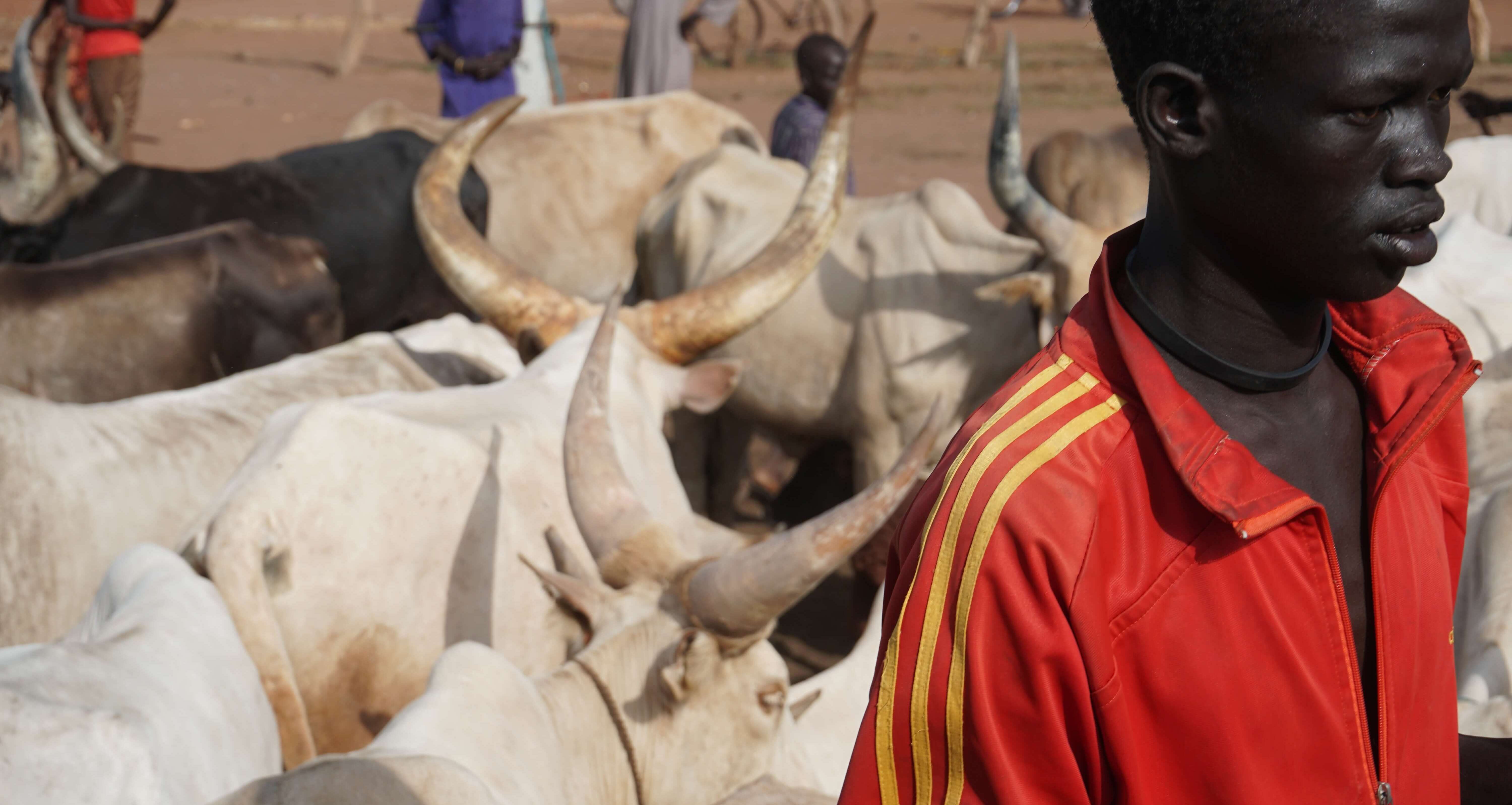 There was majak, the pelican, makuei, the fish eagle, and makuac the leopard. And black machar and red malual and white mabior. The first three were muoor cien, song-oxen, pampered and groomed, their massive horns cut to grow asymmetricallly, magnificent animals celebrated in song—and coveted by men.

At the auction ground metal bells were hanging from a tree, with newly woven tethering ropes for sale. Several hundred prospective buyers and sellers were gathered around the livestock enclosure. On a high bank of earth the auctioneer strode back and forth, praising the animals that passed through his hands, calling the bids thick and fast—as auctioneers do everywhere—and ringing a brass bell to mark each sale. Some animals were selling for high prices: one, majok, a white ox with black on his head and shoulder and on his rump—fetched more than 100,000 Sudanese pounds, almost a thousand dollars. People said that traders from Bor, across the river, were pushing the prices up.

And now came the turn of nyang, the young heifer. I had asked my friend Manuer, a leader of the gelweng—the local militia responsible for guarding cattle—to check her out on my behalf. I was trying to stay in the background. My presence, too, was liable to push the price up.

Manuer liked the look of the nyang, so we entered the bidding at 10,000 South Sudanese pounds—around $100. The price quickly reached SS£ 20,000—nearly $200. This was getting towards our limit, and I feared we would lose her. As the price continued to rise, though, the other bidders dropped out, one by one. We made our final bid: SS£ 30,000. The auctioneer called the amount out once, then twice. He looked around and rang his bell. And the cow was mine.

I left my nyang with Manuer for safe keeping. Here in Yirol, in the heart of the cattle lands of South Sudan, surrounded by communities at war, with endemic cattle theft and no effective government, this was a wise move. In a place like this everyone needs protection; and livestock need it most of all. The price I paid for my heifer was about the same as an AK-47, with some ammunition thrown in. You need a gun here to protect yourself and your assets. Manuer had one; I did not.

As a gelweng leader Manuer is a modern version of the bany wut, the master of the cattle camp, a traditional Dinka war leader. The gelweng—known as titweng in other Dinka areas—were created by the Sudan Peoples’ Liberation Army (SPLA) in the 1980s, when the SPLA split along ethnic lines. At that time the Nuer to the north of Yirol were raiding Dinka cattle on a large scale. Although the gelweng were armed by the SPLA, their legitimacy derives from their own communities, from traditional Dinka social organisation. Their loyalty is to their subtribe or section or clan, to their kin group. Today they are the main defence cattle owners have against thieves and raiders. In generational terms gelweng leaders like Manuer are subordinate to the chiefs and sub chiefs of their tribal sections, but gelweng are armed, while chiefs are not. The chiefs complain that their authority has been undermined.

What are the chances of me seeing my nyang again?  There’s a fair chance. Greater Yirol is one of the least disrupted areas of South Sudan. While other parts of the country have become synonymous with conflict, Eastern Lakes has kept the peace, internally at least, for the past seven years. In this respect it stands in contrast to its neighbour Rumbek—Western Lakes State. In Rumbek a cycle of violence has become embedded in everyday life. It has embraced almost every community, and drawn in the government itself.

Rumbek has become famous for trouble: there are killings and cattle raids every week, one community attacking another, slaughtering people and stealing livestock. The chiefs blame government officials for inaction, the government blames the chiefs for giving refuge to the guilty parties and obstructing justice. Everyone blames politicians for clandestinely supplying weapons to their own kin group and exacerbating the conflict. It seems that no one is powerful enough to stop the revenge cycle. In Rumbek town, when I was last there, there was a curfew and an air of fear. And travelling in rural areas of Rumbek is increasingly risky.

Yirol feels different. The journey there from Rumbek, from Western Lakes to Eastern Lakes, takes four hours when the going is good. The landscape—verdant now at the height of the rains—is more or less the same. But there is a world of difference between the atmosphere of the two states. On the road between Rumbek town and Yirol, once we had passed through Akot and Aluakluak and crossed the Payii bridge, we were safely in the territory of the Atuot, one of the three ethnic groups that inhabit Greater Yirol. Approaching Yirol town we passed through the Atuot toc, a stretch of grazing land of surpassing beauty. There is a river and a belt of mango and mahogany trees on the outskirts of the town. Then we came to the main square, with the market on one side, a football ground on the other and the chiefs’ court in the centre. The court was in session. The town football team had recently played a match against a team composed of foreign traders—Ethiopians, Darfuris, Congolese and Ugandans. Though times are getting harder in Yirol now, as elsewhere in South Sudan, and traders are becoming fewer, there is still civic life here. Chiefs and gelweng and government, politicians and market traders have found a way to cooperate to keep the peace.

How has Yirol maintained the possibility of ordinary life in the middle of South Sudan’s expanding civil war? Can this island of comparative order endure, as conflict spreads and the national government is mired in challenges from every side? The people of Greater Yirol have managed to keep the peace among themselves, more or less, since the independence of South Sudan seven years ago. This is the result of exemplary cooperation between youth leaders, traditional authorities, government officials and persons of influence in the state. But peace in Yirol is vulnerable, both to internal tensions and to the general decay of national life. The month after I visited it was reported that intertribal conflict had broken out for the first time since 2010. Scores of people were killed; hundreds of livestock taken. The response of the authorities in Eastern Lakes was immediate: committees of chiefs and government officials were formed; delegations were sent to the communities in conflict to persuade the victims to refrain from revenge and to discuss instead the payment of apuk—blood price—in compensation for the loss of life. The peace of Yirol hangs in the balance. If it holds, if it can be defended from internal and external threats, my nyang may still be safe—and a hundred thousand others, majak, makuei, makuac and so forth —and their owners too.