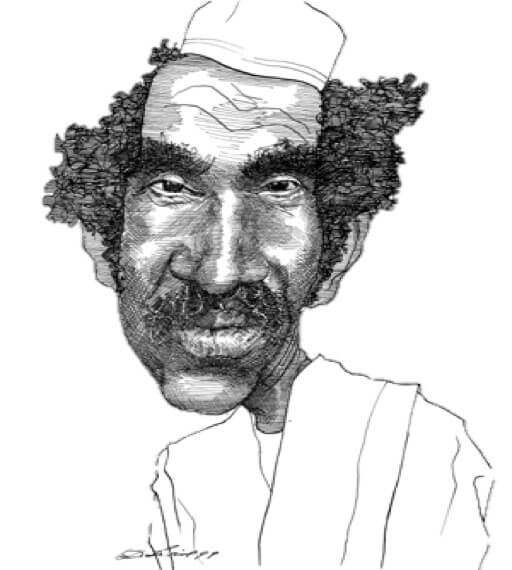 Two weeks ago the Somali novelist Nuruddin Farah returned to his native land for the first time in twenty-two years. He flew to Kismayo, the southernmost port city in Somalia—currently under the control of a warlord called General Morgan—planning to check into a hotel and track down some relatives of his who had been lost in the great displacement, the internal and external diaspora that has split many Somali families apart over the last decade.

Long years of exile have given Nuruddin a degree of cunning; he is the kind of person you are not surprised to find standing beside you before you know he’s in the room. But at Kismayo airport—as he told me when I saw him on his return to Nairobi—there was a surprise in store for him.

Most of Nuruddin’s immediate family is already outside Somalia. They left in 1993, when the fighting got too hot in Mogadishu between the militias of the two biggest warlords, Mohammed Farah Aidid and Ali Mahdi. It was a time when thousands of Somalis fled in overcrowded dhows along the Swahili coast to Mombasa. Among them were Nuruddin’s father and sister.

Nuruddin finally made it back to his home country only after his family had been forced to leave. It’s a special kind of irony because he is, above all, a novelist of family life, of the politics of personal relations. His books are imbued with the day-to-day events of the household and the dreams of its members. In Sweet and Sour Milk, published in 1979, this life and these dreams are set against the cryptic violence of the state; in Gifts, his most recently published novel, they are shown to be enmeshed in the obligations that come with personal favours and remittances from exiled family members, and with donations of foreign aid.

Nuruddin, it will be clear, is no friend to dictators, nor to warlords, nor to any faction in the Somali wars. He has, in fact, a palpable antipathy to authority of every kind, whether it be patriarchal, statist or bureaucratic. He stands at an angle to the political universe. In a wandering life, which has led him to study philosophy in India, and to dwell variously in England, America, Italy, Sudan, Uganda and the Gambia, he’s been forced to decamp at short notice not just from his own country but from several others too.

In conversation he can be enigmatic and perverse, a style that is belied by the tenderness at the heart of his writing. It is this obliquity, perhaps, that has allowed him to keep a distance from the combination of clan politics and warlordism that now dominates life in Somalia and which, it turned out, he was to come up against the moment he returned there.

Arriving at Kismayo airport Nuruddin was disconcerted to be met by eighteen gunmen in a technical, one of the sawn-off four-wheel drive vehicles that have become the emblem of Somali militias. They were there, they announced, to take him to General Morgan’s headquarters. The General wished to welcome him to the city.

Nuruddin had no option but to accept. He had met Morgan only once before, twenty-four years previously, when he’d been summoned from his post at the University in Mogadishu to teach English to the bodyguards of President Siad Barre—now, to no one’s regret, the late Siad Barre—the man who sowed the seeds of Somalia’s destruction. One of the bodyguards was Morgan, later to become Siad Barre’s son-in-law and his political heir. He hadn’t been much of a student, said Nuruddin. He had other aptitudes.

In General Morgan’s headquarters, surrounded by retainers in fatigues and wrap-around shades, the teacher and his former student compared notes. The General agreed he had never been very good at English. He was now, however, in a position to offer Nuruddin the hospitality of one of the finest houses in Kismayo. The hotels, he said firmly, were really not suitable for him to stay in. So Nuruddin’s plan to move discreetly round the city was foiled. He found himself under the eye of the warlord, in a requisitioned mansion shared with a water engineer from Newcastle, one of the last expatriates in the city. A week later he was back in Nairobi.

But Nuruddin was not about to allow Morgan to curtail his homecoming. When he finished telling me the story he explained that he had to get back to his hotel for a meeting.

“It’s another warlord,” he said, with a half-smile. “He is visiting Nairobi. I thought it might be better if I entertained him on my territory this time.”

“We have a name for these people in the Somali language,” he added. “They are called qab-gable—the makers of empty noise.”

This week Nuruddin has gone back to Somalia again, this time to the capital, Mogadishu. For someone so allergic to political power he is a glutton for punishment. As we took our leave of each other in Nairobi I reminded him of an occasion some years earlier when I was staying with him in Berlin.

The conversation had turned to locusts. Desert locusts, I’d read somewhere, swarm when the ecology of their habitat is disturbed; in the weeks that follow, they can devastate crops in places hundreds of miles away. Seeing that locusts are well-known for depriving people of food in this manner, I wondered whether Somalis, in their turn, also caught and ate them, as some people do in Asia.

Later that evening in Berlin Nuruddin read me a dream sequence from the book he was writing, a then-unpublished novel called Secrets. It was an account of a picnic in the Somali countryside, a rural idyll where swarms of locusts appear out of nowhere and strip the table bare. In Nuruddin’s story the picnickers return with nets, trap the locusts and eat them in their turn. The book had been written at a time when the depradations of the warlords in Somalia were reaching their peak.

Would it be stretching it too far, I asked him, to see an allegorical aspect to the story?

No, said Nuruddin, in his sidelong way, it would not.

And now Nuruddin is back in the land of locusts, in the domain of the warlords. So far their come-uppance is only in his imagination, in a dream-sequence in a novel. But dreams can come true. Or rather, in Yeats’ phrase, they may be where responsibilities begin. ✭