People shouldn’t write books about Africa. Not the whole of Africa. When was the last time you saw a book that aspired to cover Eurasia, or the Americas, each of them comparably vast regions of the earth? Not ever, I think. The size of the European-Asian landmass and the human diversity within it precludes useful generalisation. And Africa is just as various, if not quite as huge. There are almost as 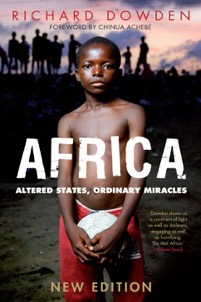 many countries in Africa as there are in Eurasia (in its widest definition), many more languages, and at least as much environmental diversity.

Yet books on “Africa” keep coming. Why is this? The sub-Saharan region of the continent—which comprises nearly fifty states—has one big thing in common: colonisation by European powers in the nineteenth century. (Even here there’s an exception, Ethiopia, briefly occupied by Italy from 1936 to 1941, but not colonised.) The European intervention defined the borders of most of today’s African states, setting the stage for continued economic exploitation by outside powers, usually in collusion with local elites. What it also did was establish a single idea of Africa in the imagination of the outside world, one accompanied by paradoxical associations of savagery and nobility, of natural wealth and human poverty, rhythmicity and ultraviolence, beauty and catastrophe.

In an important sense, then, “Africa” is a western invention. Despite attempts by visionaries from African countries to promote unity among the states that inherited dominion from Europe’s retreating empires, politicians in Africa have never paid anything more than lip-service to the pan-African ideal. African writers have an uphill task reclaiming the term “Africa” from the mythic associations it has in western literature. And most of these writers don’t write about continental aspirations, but rather about the worlds within a single country, leaving generalisations to World Bank experts, grandstanding politicians and campaigning actors and rock stars.

What not to write about Africa

For outsiders in particular, writing about Africa is full of pitfalls—patronising generalisations, resounding clichés, imprecisions and untruths. As the Kenyan writer Binyavanga Wainaina put it in his satirical essay “How To Write About Africa”, published in Granta a couple of years ago:

Always use the word “Africa” or “Darkness” or “Safari” in your title. Subtitles may include the words “Zanzibar”, “Masai”, “Zulu”, “Zambezi”, “Congo”, “Nile”, “Big”, “Sky”, “Shadow”, “Drum”, “Sun” or “Bygone”. Also useful are words such as “Guerrillas”, “Timeless”, “Primordial” and “Tribal”…. Mention near the beginning how much you love Africa, how you fell in love with the place and can’t live without her. Whichever angle you take, be sure to leave the strong impression that without your intervention and your important book, Africa is doomed.

I’ve no doubt that Richard Dowden has read “How To Write About Africa” and absorbed its lessons. As a former Economist staffer and now director of the Royal African Society, Dowden is a paid-up Africa hand. And one of the good things about his book is that, despite its catch-all title, it does not attempt to cover the whole of Africa. It consists, rather, of a dozen deft chapters on specific countries: Uganda, Nigeria, South Africa, Zimbabwe, Senegal and a few others. Dowden’s experiences in these places as a journalist over three decades are blended with summary historical analysis and a sprinkling of more wide-ranging insights. He avoids most of the tendencies skewered in Binyavanga Wainaina’s essay. From the airport-hopping life of the reporter, chasing crises from country to country, Dowden has wrested a sober account of politics and social processes in these countries, one that is of more than usual interest for a global audience.

There is a sharp but even-handed account of the special relationship between Britain and Zimbabwe, a country whose misfortunes have given rise to many more column inches in the British press than greater disasters in Congo or Sudan have done. Observing South African policy towards Zimbabwe under the presidency of Thabo Mbeki, Dowden finds an echo of Margaret Thatcher’s treatment of apartheid South Africa: both of them protected illegitimate governments from the effect of sanctions.

He also has kind words for Nigeria, the African country that outsiders love to hate. Nigeria, Dowden argues, is a failed state that works, in the same way as Mobutu’s Zaire did, before it descended into the intermittent chaos of today’s Democratic Republic of Congo. The lives of Nigerians are evidence of what he calls Africans’ greatest talent—the talent for survival. Corruption, the endemic constraint on development, he compares to an epiphyte that thrives at the expense of killing its host.

On Sudan, Dowden is less assured. His chapter on the civil war in the South includes a memorable portrait of one of the true heroes of the conflict, Peter Adwok Nyaba, a geologist turned guerrilla (recently appointed minister of higher education in the new Government of National Unity). But Dowden’s whistle-stop account of Sudanese history contains some avoidable errors. The Mahdi, who led an indigenous insurgency in Sudan in the 1880s and 1890s, did not, as Dowden asserts, rebel against the British government—which had not yet laid claim to Sudan—but the Ottoman government of Egypt. (General Gordon, who was killed by the forces of the Mahdi, was in the service of the Egyptian Khedive). Of the civil war in the south, Dowden writes that after a split in the southern rebel movement in 1991, Riek Machar, the leader of the dissidents, went over to the government side “after several months”. In fact it was several years before Riek made an agreement with the Khartoum government. William Nyuon, killed in combat as a result of the split, is described as “a respected old man”, but he was a youthful rebel commander when I met him shortly before his death.

Finally, there is a very puzzling remark about the difference between northern and southern Sudanese. Southern Sudanese, says Dowden, “are as physically and culturally different from northerners as Chinese and Norwegians”. There really is nothing like such a physical distinction between northerners and southerners in Sudan, nor any single cultural, religious or linguistic divide between them, except that few southerners would describe themselves as Arabs.

Missteps of this kind do not vitiate the book. But they illustrate the pitfalls of big books about Africa. Nobody has an equal knowledge of everywhere in the continent. When it comes to countries like Sudan or Nigeria, you could spend your life trying to understand just one of them. Sudanese and Nigerians may themselves have difficulty understanding the hand history has dealt them. Hard-won authority from one place can quickly be expended by spreading it thin somewhere else. The least we can do for African countries, whether we are from the continent or not, is respect the difference between them, even when the most visible difference is a different style of misgovernment. Respect, it should be said, is another of the engaging features of Africa: Altered States, Ordinary Miracles, respect for ordinary people and their ways of life. Although the book is addressed largely to a non-African audience, it will also be read with benefit by people who live in the countries that it chronicles. ✭