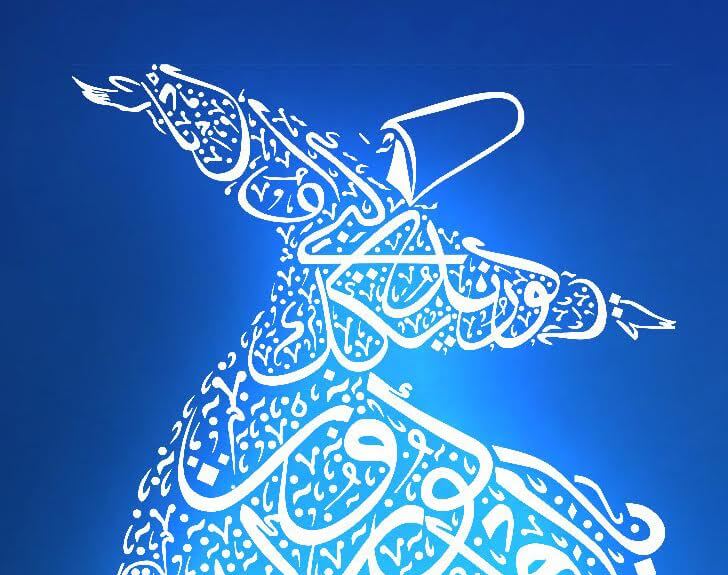 It’s good to know, if you’ve been drinking, that a mystical poet is there with you in spirit, though he may have been dead for seven hundred years. The Persian religious leader Jelaluddin Rumi (1207-1273), author of the lines above, is currently experiencing a revival, both in the old world and the new. The Sufi sect he founded, known in the West as the whirling Dervishes, whose adepts seek transcendence through drumming and dancing, has been going from strength to strength. And, in a separate development,  it’s reported—though on what authority it is not quite clear—that in the US, in translation, Rumi has become the country’s best-selling poet, with a range of admirers that includes celebrities such as Madonna and Goldie Hawn—along with the fashion designer Donna Karan, the avant-garde composer Philip Glass and the new-age guru Deepak Chopra.

Rumi was born in Afghanistan and died in Konya, a city in present-day Turkey which remains the centre of the Dervish movement. In his day both places were part of the Persian empire; thus Rumi’s vast outpouring of ecstatic poetry has become canonical in modern Iran, where it is considered by some to be second only in importance to the Koran and other sacred texts of Islam.

Like the Song of Solomon, Rumi’s expressions of love and intoxication may be understood as an allegory of the divine rather than a direct account of lived experience. It’s curious, though, to imagine ayatollahs in Iran today poring over verses like this one:

I want to hold you close like a lute,
So we can cry out with loving.
You would rather throw stones at a mirror?
I am your mirror and here are the stones.

Rumi’s poems speak of demons and talking trees, of dugongs that graze on hyacinth beds, of taverns and tattoo parlours. The tavern is likewise a metaphor; it represents a state of mind. Yet Rumi’s verses also suggest that the condition of drunkenness, the actual experience of being drunk, can offer a glimpse of the possibility of another reality, and a partial expression of it. He believes, as the philosopher William James also did, that drunkenness is part of the mystical whole, a hint of the possibility of higher consciousness, of spiritual intoxication. So there you have it, topers: feel free, drink on.

The reed flute and the dulcimer

Another central image in Rumi’s poetry is the reed flute. In its breathy notes he finds the essence of nostalgia, the sound of yearning—the desire of the reed to be reunited with the reed bed. Human speech, he 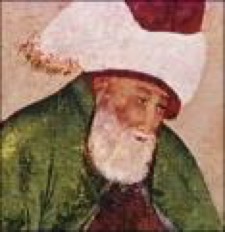 says, is like the flute. It longs to return to the source, as the lover longs for the loved one. And this sense of loss, of separation, lies behind both language and music.

It’s an odd experience to listen to Madonna and Goldie Hawn—figures not hithertofore  associated with mystical Islam—reciting these verses on a glitzy CD of Rumi’s verse recently produced by Deepak Chopra. Almost as odd as it might be to listen to Iranian clerics reciting them to each other after prayer. But the spirit of the work shines through. The translations used on the CD are from The Essential Rumi, by Coleman Barks, an English professor from Tennessee. I can’t tell how true they are to the originals. But they are energetic and funny. Rumi is a poet for all seasons. Like the Dalai Lama, he can survive a turn as a Hollywood celebrity.

There’s a new biography of Rumi—fictionalised and a mite solemn—by a British writer, Nigel Watts. The Way of Love (Harper Collins) describes the poet’s trajectory from Islamic jurist to full-blown mystic, a transformation that was provoked by his love for a wandering dervish called Shams of Tabriz. The book tells how some of Rumi’s followers, including one of his sons, became so jealous of Shams’ influence that they murdered him. The poet’s quest to be reunited with the spirit of his dead friend is the inspiration of the odes and quatrains sampled in The Essential Rumi. Recorded by an amanuensis, these verses form a vast elegy written by Rumi, habitually referred to by him, in an affecting paradox, as The Works of Shams of Tabriz.

Will I get round to reading The Works of Shams of Tabriz? Oh I doubt it. But fragments of Rumi settle in the mind—like leaves on a stream, or embers, or a rain of frogs. Pick your metaphor. Or devise your own. Reading Rumi frees up your capacity for imagery, and for feeling also.

Seven lines without an author

For a good number of years, taped inside the lid of my guitar case, there have been seven lines of poetry without an author. They were left there as a farewell gesture by someone who… well, never mind the who of it. Now, years after the fact, reading Rumi again, I realise that those anonymous lines in the lid of the guitar case are by him.

It’s a characteristic passage—admonitory but touching—that, among other things, warns the reader against the very act of reading and the distraction it holds. Here are the lines in question, in Coleman Barks’ translation:

Today, like every other day,
We wake up empty and frightened.
Don’t open the door to the study and start reading.
Take down the dulcimer.

Let the beauty we love be what we do.
There are hundreds of ways
To kneel and kiss the ground.

I suppose if a contemporary poet had written these lines they might strike one as sententious. But the authority of historical distance and the dusting of exoticism that Rumi’s reputation brings have the happy effect of releasing us—along with Goldie Hawn and Deepak Chopra and Madonna (and perhaps an ayatollah or two)—from petty-minded strictures of that kind. ★

Coleman Barks’ translation of Rumi’s “Take down the dulcimer…” forms the epigraph to A Meeting by the River (1992), a recording of musical improvisations by Ry Cooder and V.M. Bhatt, a rare piece of work by two remarkable musicians, of rather greater interest than Deepak Chopra’s tribute album.

Dressing up for the election

What the candidates are wearing on the campaign trail