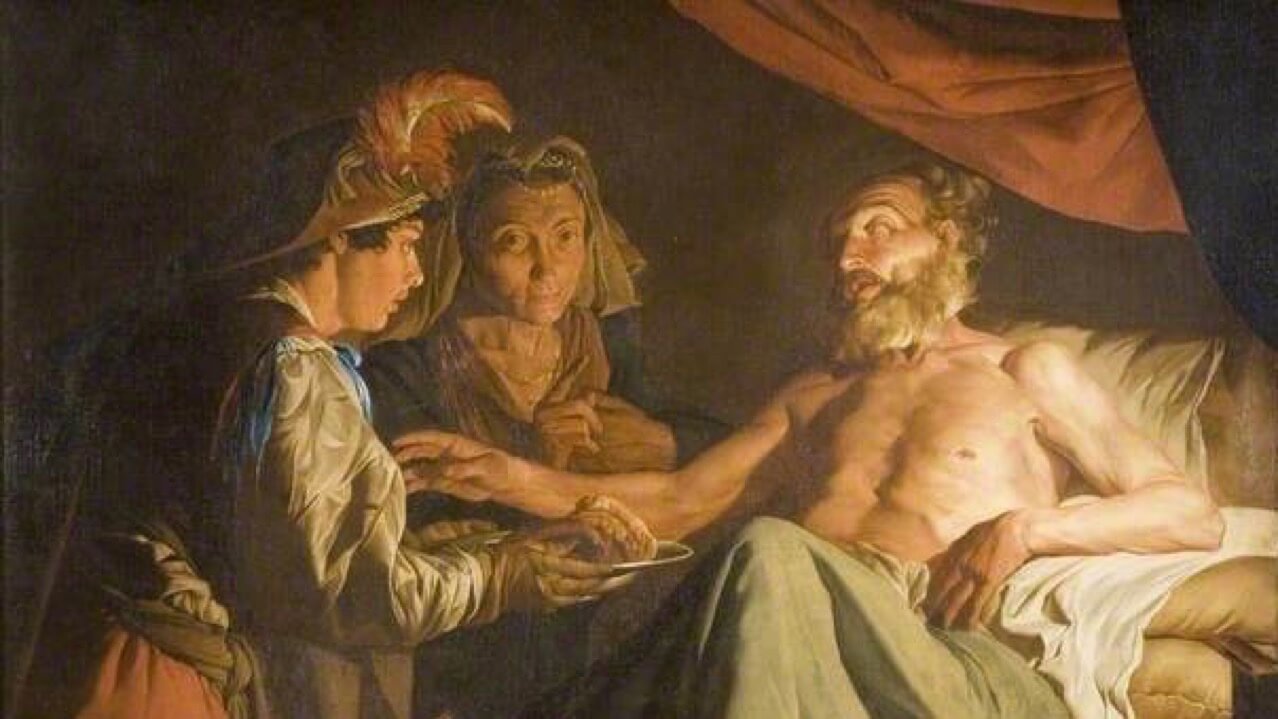 Isaac giving his blessing to Jacob. Painting by Matthias Stomer

If you were awake early this morning listening to the BBC World Service, which takes over the Radio 4 waveband in the early hours (a godsend for night-workers and insomniacs and those who keep irregular hours), you might have found yourself listening to a programme about how extremely old we are getting. Ageing individually, in the implacable way of things, of course, but also, in every Western country, becoming older collectively, as communities, as peoples.

It’s not just a question of our ever-lengthening life expectancy, rather of the interaction of this increasing longevity with a rapidly declining birth-rate. The combination of the two factors has produced a demographic transition in the course of which the traditional pyramidal distribution of age-groups, with a broad base of children and a narrowing number of older people, is being transformed into something more like a pillar, the same size all the way up, with as many sixty-year-olds as six-year-olds.

It’s happening in North America, Europe and many countries in Asia. While most of us have been worrying about there being too many people in the world, demographers and others are more concerned with the likely effects of the falling-off of population growth, with the increase in top-heavy populations as the tendency to gerontification spreads to the rest of the world.

This may all be familiar to pension fund managers and social security planners, but the extent of the change hadn’t quite come home to me until I heard the first of this series of programmes last Monday. Out of the ether, as I lay thinking about the past and the future, indulging in the sombre reflections of the small hours, falling in and out of sleep, the guttural voice of the veteran management guru, Peter Drucker, could be heard discussing fertility rates in Southern Europe, which are lower than at any time in history. At roughly one child per woman of child-bearing age the population is liable to halve with each generation.

Countries such as Portugal, Italy and Greece now face a decline as steep as the leap in their population levels in the 19th and 20th centuries, the surge in numbers that brought the world to its present pass. The decline is so spectacular, according to Drucker, that in Italy, at the present rate, in 100 years’ time, there may be no native Italians left.

No Italians! I woke up when I heard that. Even allowing for the routine hyperbole of guruspeak, that is an astonishing thought, which must have been a source of distress to listeners from the Alps to Bari and beyond. Can it be true? Time will tell—though of course by the time Time tells us we will all be dead.

The shift to the old seems set to precipitate political and social change of substantial proportions. Another management guru, Charles Handy, offers this vision of the coming gerontocracy. He foresees a society where the majority of voters are of retirement age. (Or what used to be retirement age; most of the contributors to this series of programmes predict the abolition of compulsory retirement as the pool of youth available for the work force shrinks.) This new, increasingly elderly majority will vote, he suggests, for a quieter, calmer world, with less noise, less traffic and more trees.

This is an interesting notion, since today it is mostly younger people who campaign for these things (they are tomorrow’s old people, of course). There may be a further convergence that would support Handy’s argument. The old, those no longer in the thick of work, of getting and spending, are in some respects likely to become more like the young, with time to spare, and dreams, but less money than they would like.

Handy and others suggest that the old will have to work because even in the richest countries social security systems will fail to provide for them. This much is already apparent. Howard Davies, the Chairman of the Financial Services Authority, the body that regulates the City of London, quoted Trotsky when quizzed about this, offering no comfort. According to Davies, it was Trotsky who said “old age is the most unexpected thing ever to happen to a man.” (I thought it was Abraham Lincoln who said it, but who would want to pick a quarrel with a mandarin?) Davies then suggested, amusingly but not very usefully, that those on low incomes could find the wherewithal to boost their pensions by not buying the Sun newspaper.

In the entire series of programmes, conceived and immaculately produced by Nick Rankin, no one speaks of an afterlife. It seems people have come to fear decay, loss of memory and physical debility more than death itself. Indeed, for increasing numbers of people the years from 60 to 90 are a kind of afterlife, a time when they strive for the goals that had eluded them during the time they were in the throes of employment or child-raising—those who still raise children, that is.

If, as Charles Handy suggests, these new old people—that is to say, all of us in due course—become a force for political and social reform, allying themselves with the young people that remain in order to bring about constructive social change, then so much the better. It will be a new alliance, an alliance of the old and the young against the thoughtless getting and spending of the middle- aged. Thus do we live—and die—in interesting times. ✭