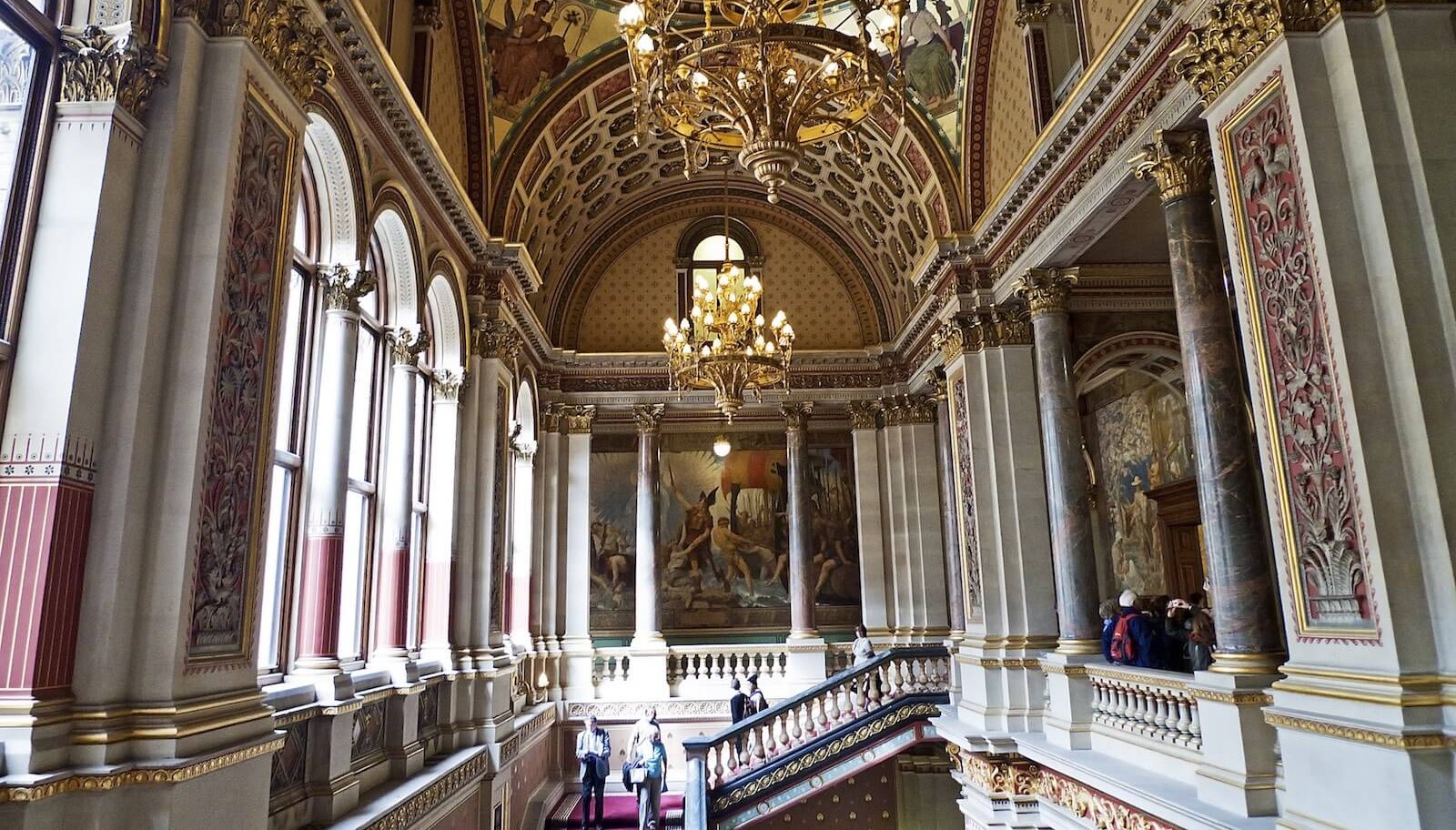 The Grand Staircase at the British Foreign and Commonweath Office

Falling over my feet on the grand staircase of the Foreign Office in London the other day, I was struck, as I sprawled, dazed, on the mezzanine, by the astonishing paintings that adorn the walls of this inner sanctum of government. The works installed here must have exerted their influence—subliminal or otherwise—on generations of diplomats, ministers, spies and visiting dignitaries. Yet the artist who created them—famous in his day—has fallen into relative obscurity.

The murals adorning the long gallery at the head of the staircase were painted during the First World War. They form a graphic novel avant la lettre, an allegorical narrative of the growth of Britain as an imperial power, featuring lissom youths and nubile young women personifying the arts of peace and war. Alongside them are larger-than-life figures of Britannia, her allies, colonies and dependencies. The murals are painted on canvas in high Victorian style, a style already out-of-date when they were new, one that combines voluptuousness and political propaganda to a degree that we—post-imperial, post-modern—can appreciate now only as camp. This is our loss, because the paintings are a curious and instructive example of imperial vision and its counterpart, patriotic excess.

Here, in one panel (if you start from the right, though it’s the last in historical sequence), is the figure of Britannia sending her sons out to rule the empire. In the next one along the collonaded hallway—here in her manifestation as Britannia Belletrix—she is training them in the arts of war. Then, as Britannia Pacificatrix, she is represented bringing the countries of the world together—France, America, Japan, Italy, Serbia and Montenegro among them—in order to ensure world peace under the League of Nations. (Yes, it’s a pity that didn’t happen).

In this panel she is flanked by her dominions: Canada, a youth in a maple-leaf loincloth, and Australia, nude save for a bush hat. Lesser colonies and possessions are not represented. You wonder what Basutoland might have looked like. Or the Sandwich Islands. 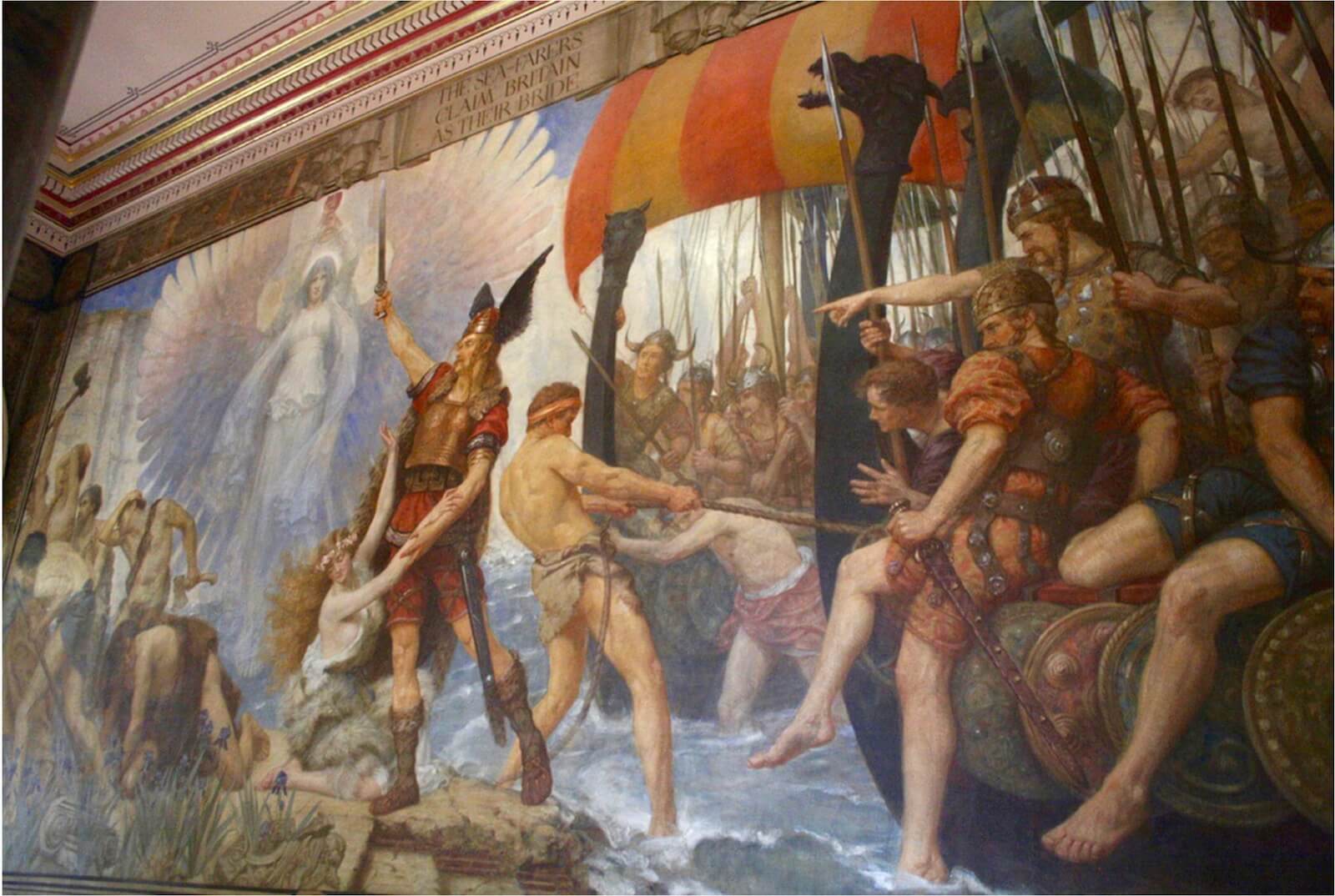 Britannia Sponsa, “The Seafarers claim Britain as their bride”, by Sigismund Goetze

Striking though these images of Britannia Belletrix and Britannia Pacificatrix are, they are eclipsed by the image in the panel to their left, This is first in historical sequence and portrays a myth of national origin that seems likely to cause offence to Welsh, Irish, Scots and English alike. The figure of Britannia lies prone and gasping on the shore, awaiting ravishment at the hands of beefy Nordic warriors in winged helmets descending threateningly into the surf from long ships. Meanwhile Britannia’s minions—Angles? Saxons? Celts?—flee abjectly out of frame and into the twilight of history. The title of this panel is Britannia Sponsa. “The Seafarers,” proclaims the legend, “claim Britain as their bride.”

So that’s how it happened, then. The birth of a nation in gender-based violence at the hands of overseas invaders. This might be seen as an advance on the one-thing-after-another account of British history that was prevalent in British schools when the paintings were created (later lampooned by W. C. Sellar and R. J. Yeatman in 1066 And All That). It is striking, though, that such a lurid version of the national story should have been placed so prominently in the Foreign and Commonwealth Office, at the former heart of empire.

A forgotten painter of the early twentieth century

The paintings on the Foreign Office staircase nearly didn’t make it to their present august position. They are the work of Sigismund Goetze (1866-1939), a painter whose name is now almost unknown. Absent from the Dictionary of National Biography, and meriting only a line or two in specialist accounts of Victorian and Edwardian artists, Goetze is more-or-less invisible in the history of art. But a forthcoming article by the cultural historian Caroline Dakers casts new light on his life and work.

Goetze spent seven years executing the murals. In his time he was a celebrated figure, both as an artist and a philanthropist. He financed the rose garden in Regent’s Park, where there is now a memorial to him featuring a fountain with a sculpture of Triton, son of the Greek god of the sea, surrounded by figures of dryads. He lived much of his life in a grand Greek Revival house still visible from the Regent’s Park canal. He was socially well-connected—a brother-in-law of the plutocrat Alfred Mond (later Lord Melchett, the industrialist and politician who founded ICI) and a benefactor of many national art collections.

Goetze’s ancestors were eighteenth-century immigrants from Central Europe, and despite his Establishment connections and the overweening patriotic tone of his art he and his epic paintings fell victim to wartime nationalist hysteria and anti-Semitism. There was opposition to them, not because of any dispute over their vision of British history, but due to his German and Jewish ancestry.

Goetze’s supporters finally prevailed, and the paintings were completed and installed in 1921, but he felt he was given scant acknowledgment in return for his gift to the nation; and he died a disappointed man. Caroline Dakers’ article, shortly to be published in the Journal of the Decorative Arts Society, will do something to restore him to his place in the history of visual culture: a luscious anachronism, the last of the romantic visionaries of Victorian painting. 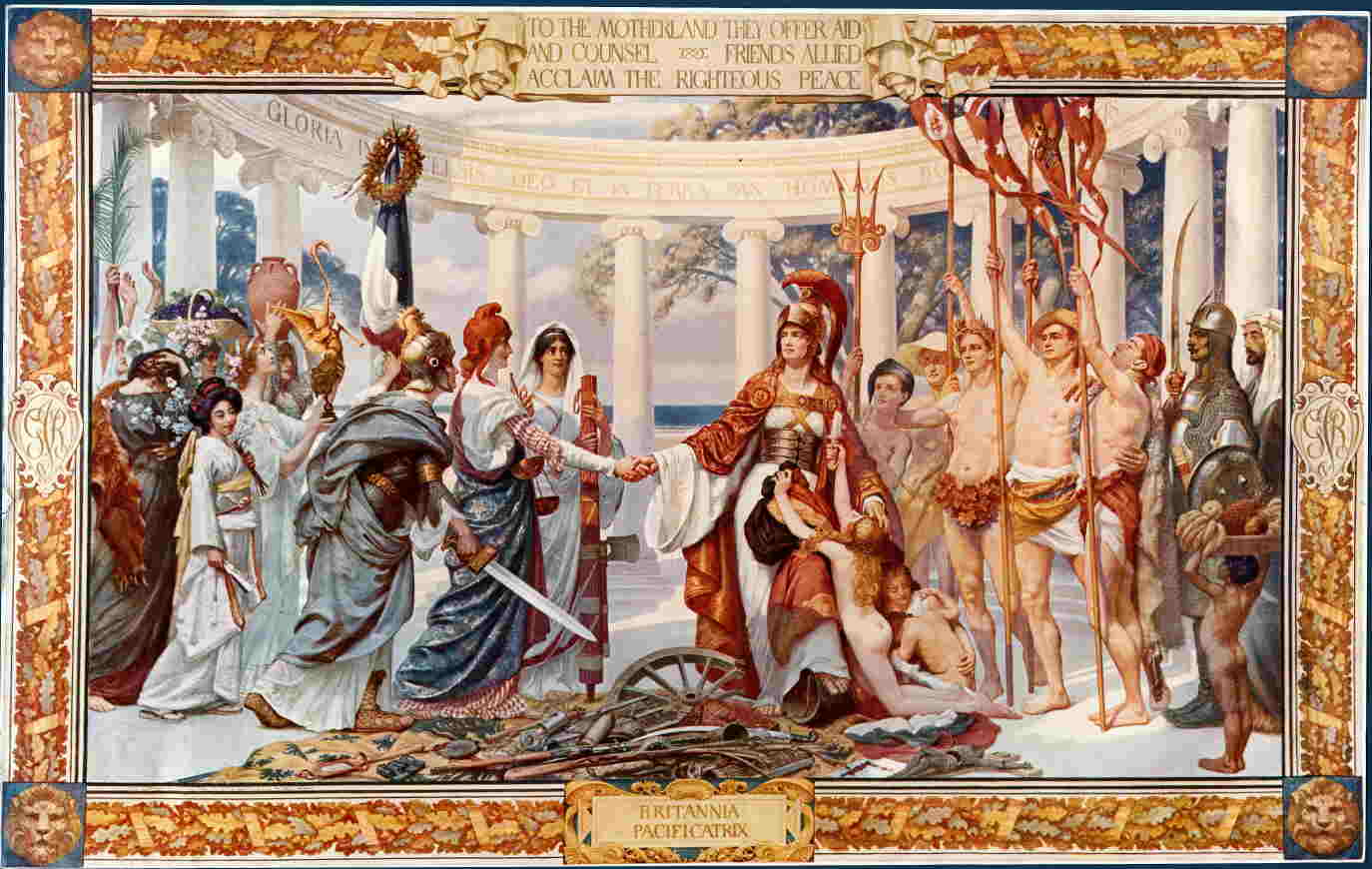 A far cry from cool Britannia

In the architectural context of the Foreign Office, most of which is in the style of an over-decorated Italianate palazzo, with coffered ceilings, gilded escutcheons, and a superfluity of marble pillars, the murals may be seen, from an aesthetic point of view, as a pleasant surprise. Leaving aside their political message, it’s hard not to admire their technical panache or resist their glorious parade of flesh, an array of near-nakedness that must turn the gaze of diplomats of all genders and every sexual inclination. The Foreign Office building itself, cleared of grime and guano in the 1980s, and now being cautiously opened to the public, is these days also revealed in its vulgar splendour.

No doubt the current Foreign Secretary is preoccupied by the ordeal he is currently suffering at the hands of the press in the wake of his divorce. Let him distract himself for a moment, though, with a glance at the murals on the Grand Staircase. They may not be his cup of tea—Goetze’s work has a limited appeal to those on the Left. Nevertheless, the vision of national destiny they embody may give him pause for thought. 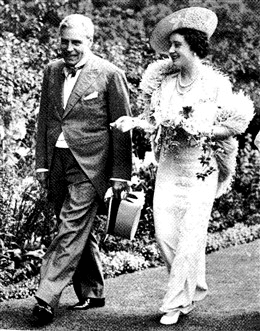 Queen Mary, the Queen Mother, with Sigismund Goetze at a garden party at his home, Grove House, London c.1920. Photograph by Olivia Housing

Robin Cook, the present UK Foreign Secretary, like other foreign secretaries before him, walks past Sigismund Goetze’s paintings most working days. Of his predecessors as Foreign Secretary, some were charmed, others loathed them. In the 1920s, when the paintings were first offered to the Foreign Office, Lord Curzon fought to keep them out. But Lloyd George, as Prime Minister, overruled him. In a fittingly overstated phrase, he said they “brought light to a tomb”. In the 1980s Douglas Hurd described them, patronizingly but indulgently, as a mixture of “melodrama, pathos and high camp”.

Anachronistic, grandiose and unsubtly racist, the murals represent an inflated national idea that aroused strong passions in Britain until quite recently–and still does for some. Sigismond Goetze’s nationalist allegory is a far cry from Cool Britannia, our current watered-down version of patriotism. But we should bear it in mind as we strive to reinvent an idea of nationhood that is capacious enough to embrace the ongoing process of immigration and cultural transformation— the incoming of the children of empire—a process that has been more gradual, but which may be no less epoch-making than the arrival of the Norse on the English shore. ★