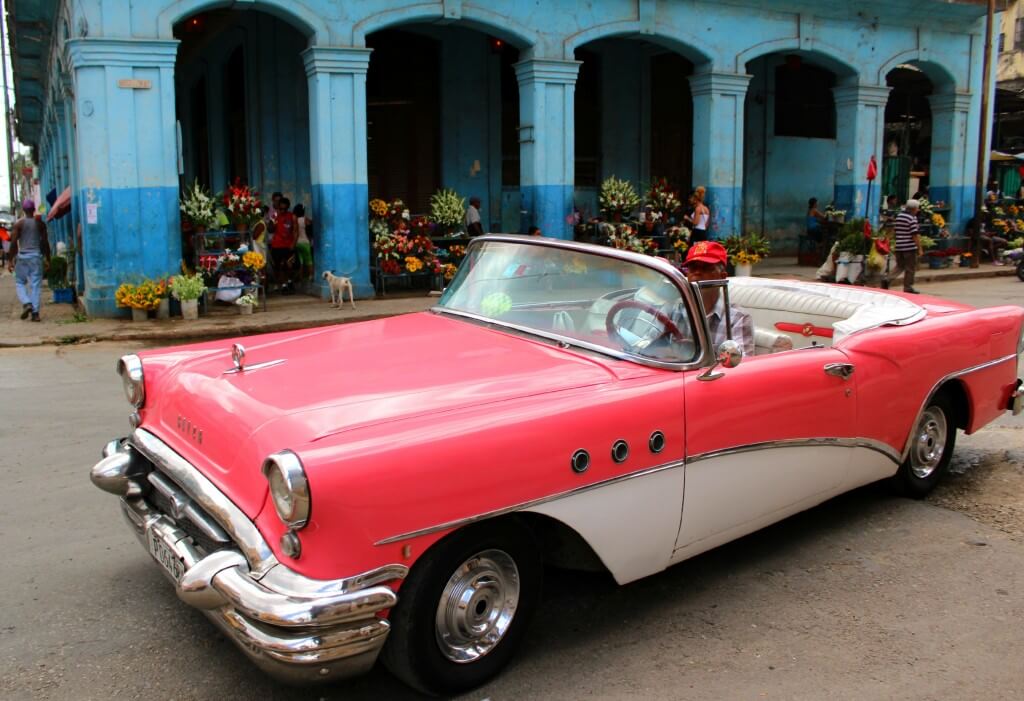 The contrabandista is dressed in white, a string of votive beads beneath his shirt, leaning against the glinting tail-fin of a massive mauve-and-ivory ’55 Chevrolet Bel Air. I’m leaning on it too. Those fins are from the fifties, when cars were cars and fins—in this case—were lilac and long.

All around us the colonial buildings of old Havana—formerly one of the most elegant cities in the Americas, now its most sadly decayed—stand bleeding, their facades dank and peeling, interiors intricately subdivided into cramped apartments and piles of noisome rubble. As fast as UNESCO restores one of these matchless buildings, another collapses. Or implodes.

And the cars. Thousands of them. Strewn along the streets of Havana and other Cuban towns and cities: Buicks, Studebakers, Plymouths, Pontiacs, most of them as ruined as the buildings, their suspension shot to pieces, their windows cracked from side to side. Some, though, even now, are ready to roll, their engines and bodywork lovingly maintained, as though the golden age of the private automobile were still with us. Still others are up on blocks, diligently cannibalised for spare parts. Since the American embargo on Cuba began three and a half decades ago spares have been as unobtainable here as new cars.

Here is a charcoal and aubergine Pontiac Parisienne waiting at a traffic light; ahead of it a sky-blue Studebaker Champion, with its curious circular radiator grille. And here—joy!—is a pink Cadillac, pitching and rolling like a galleon under sail along the Malecón, Havana’s ocean drive. The Cadillac’s tumescent bumpers are gleaming, its burgundy upholstery miraculously intact, as it noses past an even more astonishing vehicle, not US-made but Russian—a stretch Lada the shape of a shoebox, a wonder of Russo-Cuban bricolage.

Nearby, in Havana’s Museum of the Revolution, alongside Che Guevara’s asthma inhaler and his stuffed horse, there is a Pontiac Silver Streak, with a false floor, used to smuggle ammunition during the revolution.

These are cars from the high point of American consumerism, huge, voluptuous, technicolour cars, cars designed for cruising big city streets, for making out at the drive-in, cars from an age of innocent exuberance, before the oil crisis, before anyone cared about the environment, from an era when automobile design, unconstrained by economics or ecology, aspired to the condition of aeronautics. And here they are today, marooned in Cuba, in the midst of the worst economic crisis in the island’s history, with their owners barely able to afford to eat. 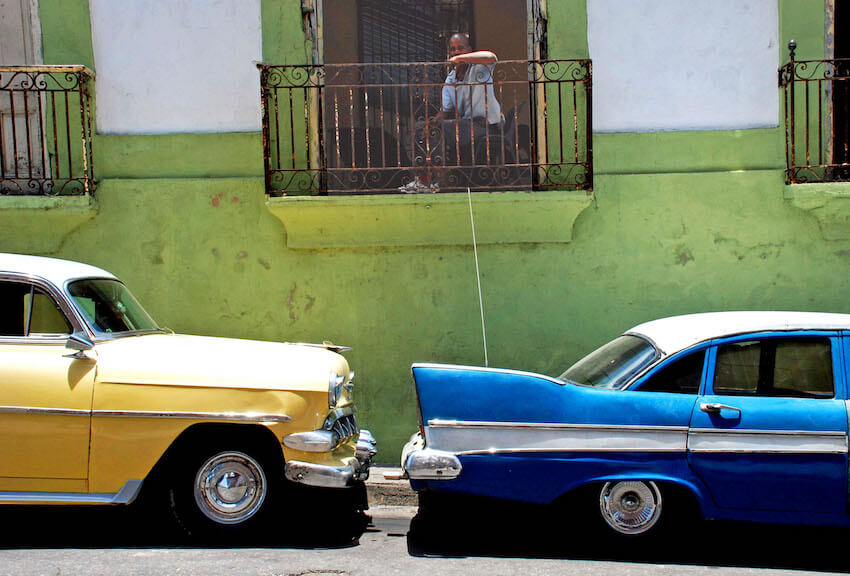 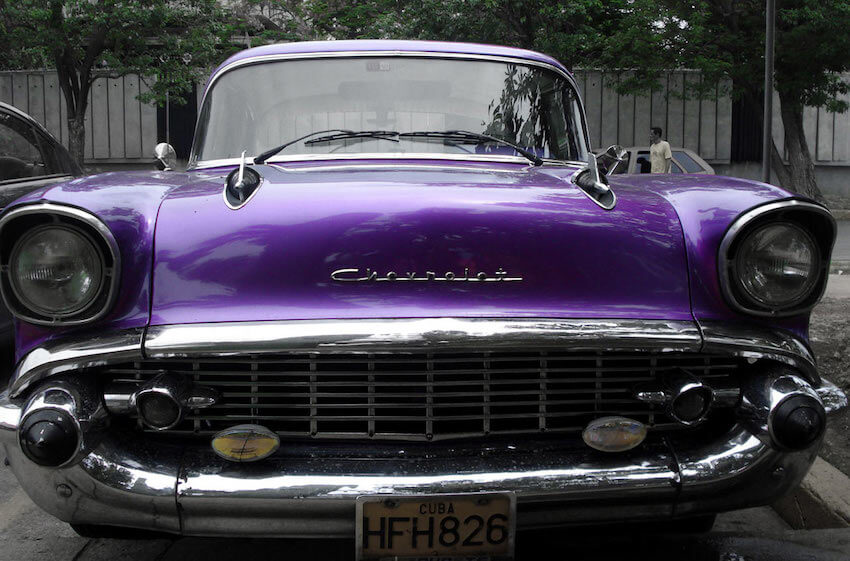 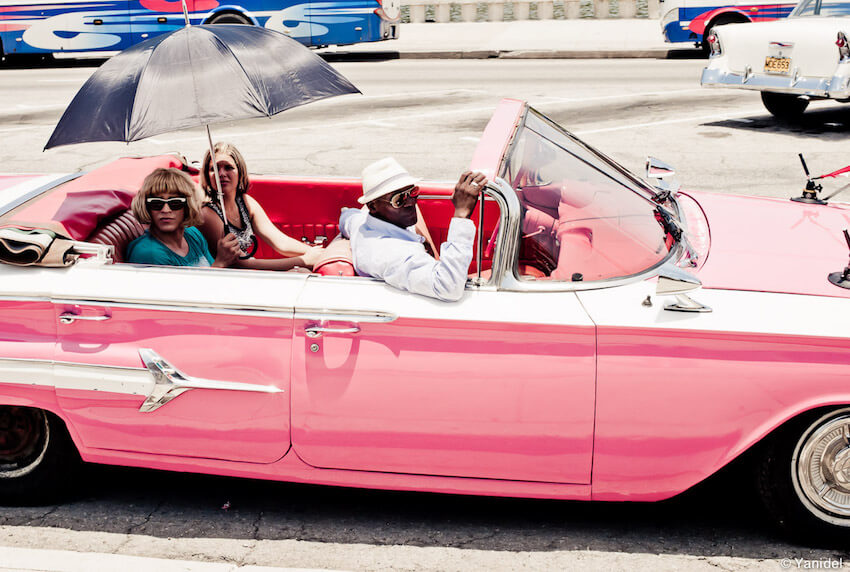 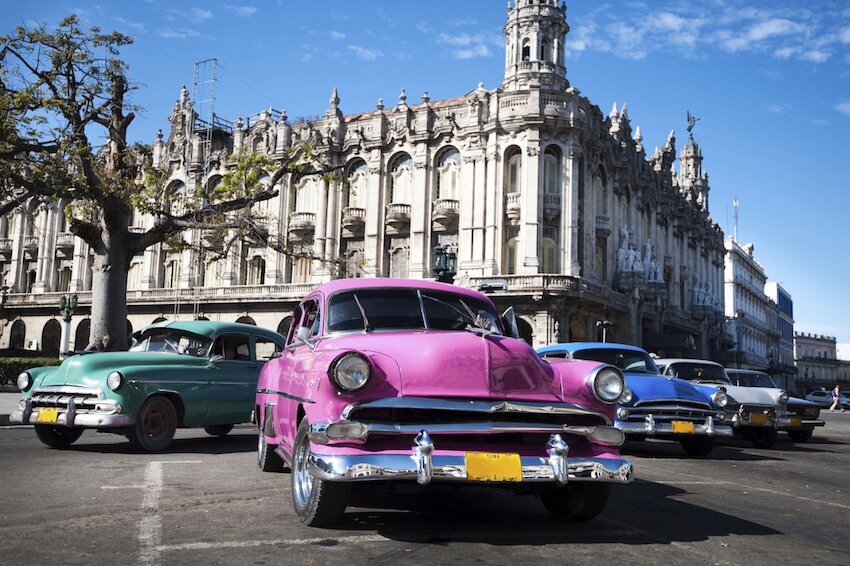 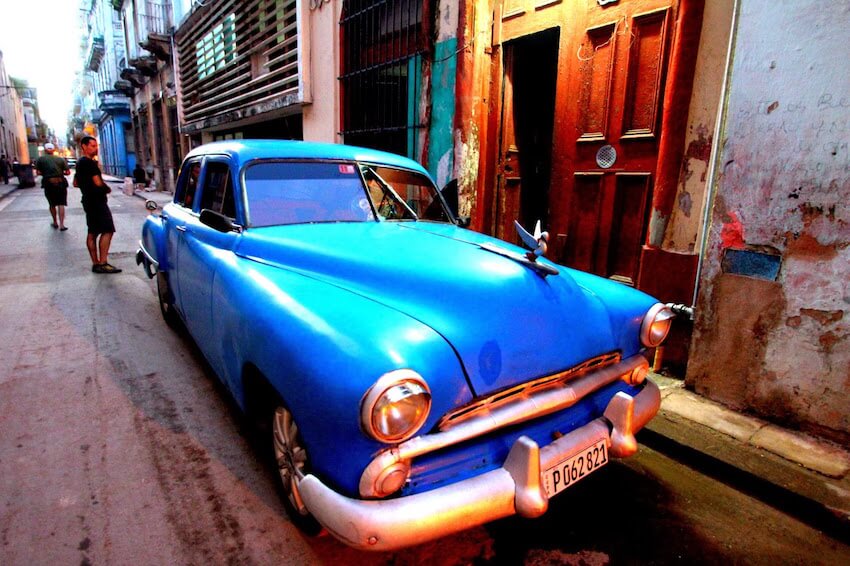 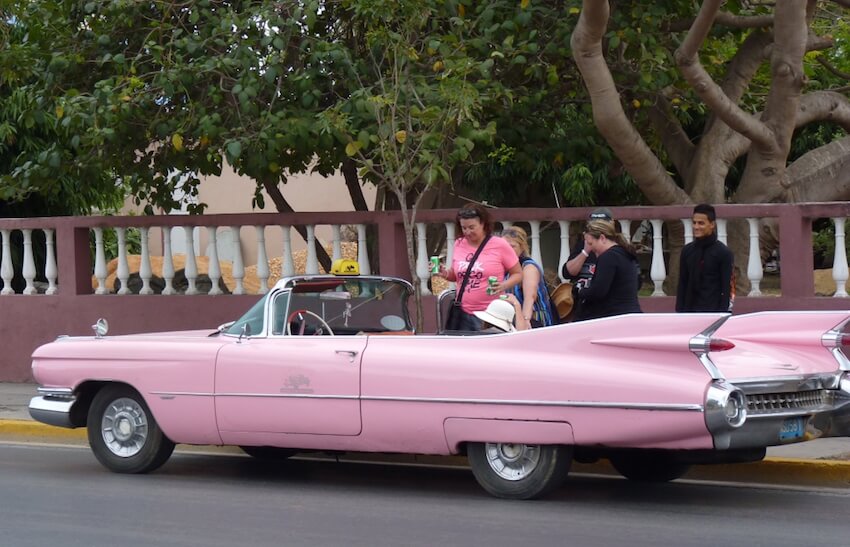 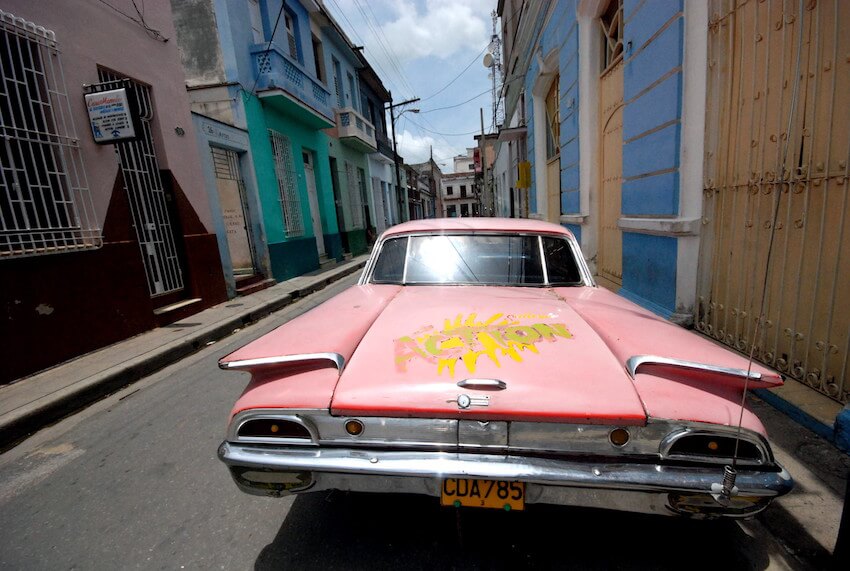 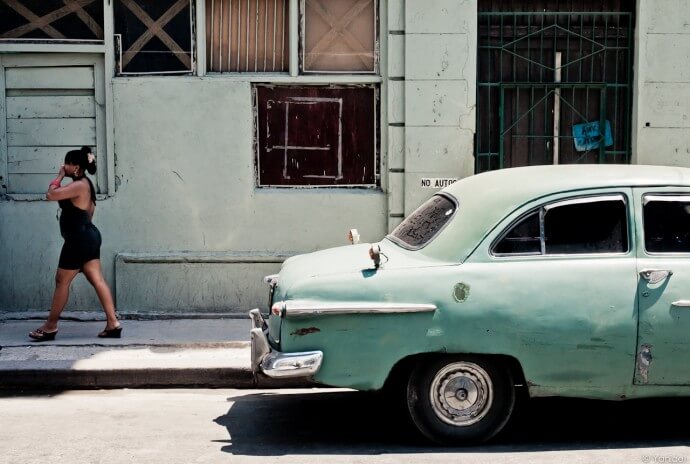 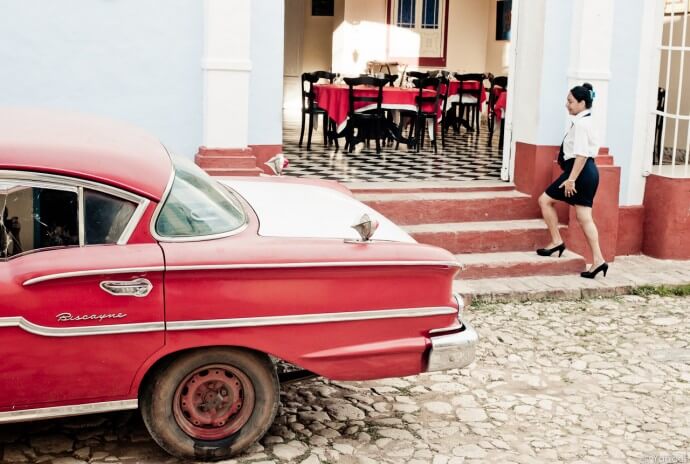 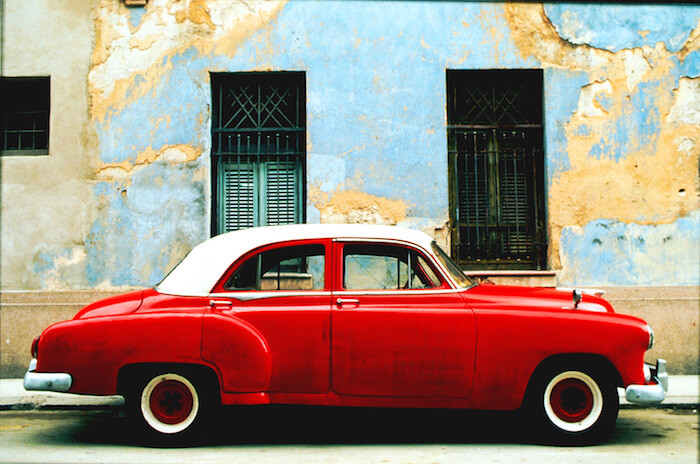 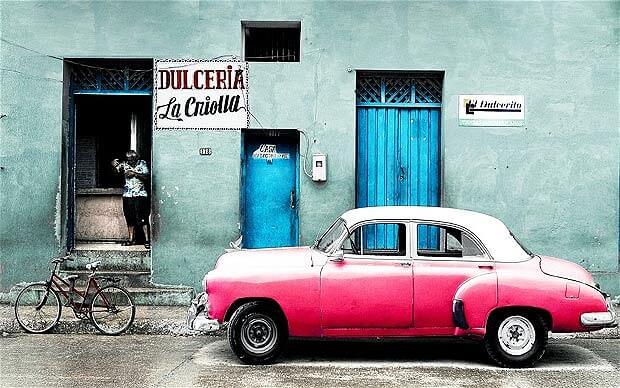 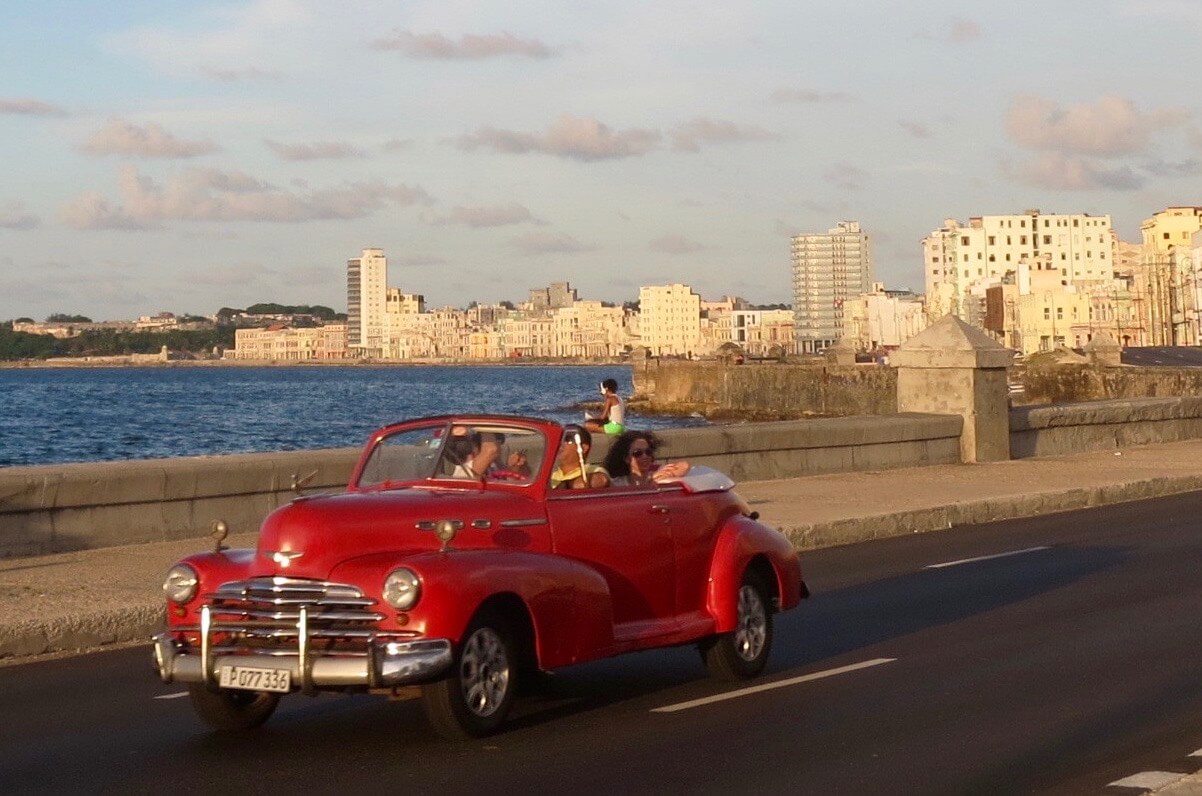 In Cuba today, in the late 1990s. the command economy is dead; the black market is king. The collapse of communism and the end of the Soviet subsidy have sent the standard of living into swift decline. The average monthly salary is the equivalent of five US dollars; all key commodities are rationed. With gas at ninety US cents per litre only a very few of the owners of these cars can keep them on the road. So the driver of the mauve-and-ivory Chevy that I’ve been leaning on near the Malecón has to do some business on the side in order to survive.

He has contraband rum for sale at three US dollars a bottle. He can find you light bulbs, Cohiba cigars, kitchen units, bread beyond your ration, girls, boys—more or less anything you want—all for a price. Amid the dark colonnades of the old city the bumper of his Chevrolet is the only thing that shines. A world heritage site has become a combination of black market bazaar and classic car museum.

From the narrow streets of old Havana, along the Malecón, to the mansions of Miramar and the ice-cream parlours of Vedado—locations now familiar to European cinema-goers from the film Strawberry and Chocolate—Habaneros are living in a parallel economy, semi-legal and dollar-based. The government euphemism for this chronic economic difficulty is “a special period in time of peace”. The phrase conceals an urgent question for Cuba’s rulers: do they have time to adjust to the global triumph of capitalism? And, in more immediate terms, where can the country get more US dollars?

The answer to the last question, at least in the near future, is from tourists like myself—from Europeans, Canadians, Mexicans—visitors from anywhere but the United States (that’s until the US embargo is lifted). In Havana old murals, much photographed by tourists, still proclaim Socialismo o Muerte—socialism or death. But the actually existing choice is between tourism and misery.

What tourists find, along with the cars and the decaying colonial architecture, is a living display of cold-war culture, in its tropical manifestation. On the one hand, the revolutionary shrines, the cult of Che Guevara, the murals and the ruins of the command economy, the wreckage of a revolutionary vision. And on the other hand, artefacts from the dreamtime of American consumerism, inadvertently preserved by 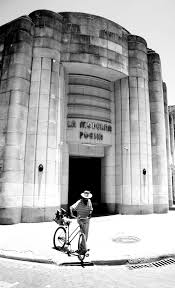 the revolution, objects that seem to be waiting to be woken from sleep.

Walking back from the old city to the house where I am staying I pass the empty windows of government shops—department stores that were nationalised in the aftermath of the revolution. Their names are announced in sprawling steel and neon. “Roseland”, they say, or “Peerless”. Like the cars, they are a memorial to the visual style of the 1950s. But inside there is only a pitiful selection of shoddy goods for sale.

The grandest of them is near the Floridita bar, where Hemingway counted out his later life in daiquiris and mojitos. A massive glittering stone facade with deco lettering spells out the name of the store: “La Moderna Poesia”. It looks like a bank. Before the revolution this was Havana’s biggest bookshop; now it is a hollow shell.

Tonight, inside the shop, I can see a janitor in the emptiness with a hurricane lamp. This nocturnal guardian of the spirit of poetry is sitting on a low stool, hunched like Rodin’s “Thinker”, one hand on her chin. In her other hand is a book. I can just make out the title. What she is reading is not modern poetry. Nor is it political theory. It’s a textbook of accountancy. In the ruins of the command economy, ironies abound. In Cuba, irony is one commodity that is not rationed. ★