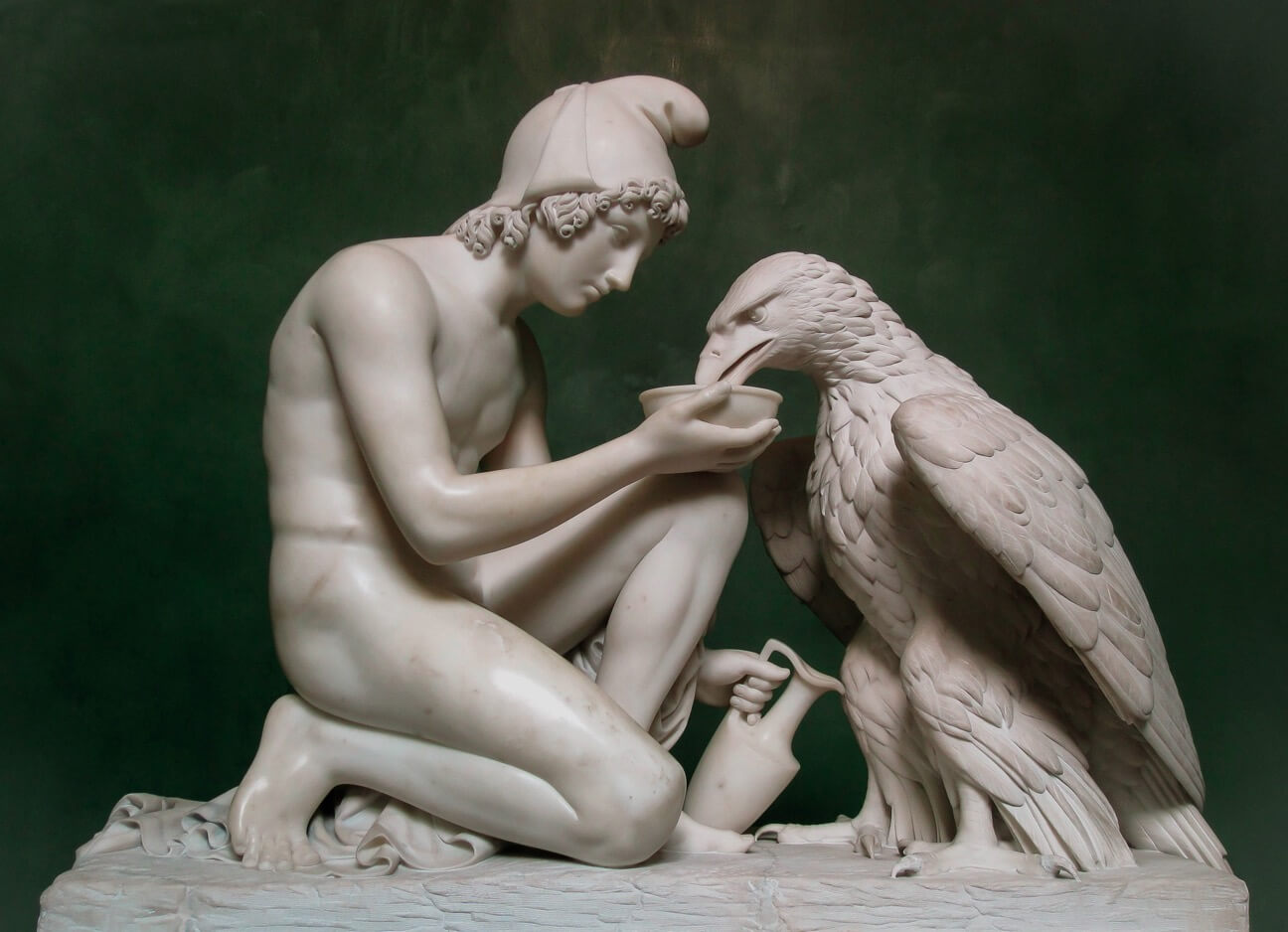 Humans have always done whatever they wanted with animals. Why not have sex with them too?

Ganymede with Zeus in the form of an eagle. Sculpture by Bertel Thorvaldsen, 1817-1829. Minneapolis Institute of Art.

Humans have always done whatever they wanted with animals. Why not have sex with them too?

Considering what we do routinely to our fellow creatures—incarcerating them, castrating them, filching their mother’s milk, slaughtering them, and eating their flesh—practices that are all deemed acceptable in most human societies, not to speak of the additional bodily invasions visited on them under the auspices of experimental science—considering, that is, the general absence of moral compunction in our dealings with other species, it is striking that there should be just one universal prohibition in our interactions with them: the ban on sexual relations.

Striking, also, that fond owners of household pets, whose love for them may well surpass their love for humankind, and whose affection towards their companion animals tends to express itself in intricate, often public, grooming procedures—that these doting owners too should, in general, concur with this prohibition.

Who, in fact, even in this age of compulsive transgression, has ever argued publicly for the right to have sex with a pet, or other non-human animal? Not animal lovers. And, on the other side, not vivisectionists either. In My Dog Tulip, J.R. Ackerley acknowledges performing acts of interspecific sexual stimulation on his pet German shepherd, fingering her up when she was in heat, but Ackerley’s unapologetic confession is not exactly a rallying cry for zoophile liberation. These days, doubtless, there is are online communities for heterogeneric and cross-specific lonely hearts. But we are still waiting, as Midas Dekkers puts it, “for the first man to tell Oprah Winfrey… about the wonderful night he had with his goat.”

Meat-eating and cannibalism; husbandry and slavery

Dekkers’ archness can be catching. Yet Dearest Pet is a serious book, more-or-less. The fact that it is difficult to discuss the subject of sex with animals without facetiousness is a measure of the success of the prohibition that exists against it. Even in the current atmosphere of doctrinaire tolerance in many western countries, where all kinds of sexual practices have become widely accepted, the ridicule and opprobrium that attaches to bestiality remains.

Perhaps it is because the system of human exploitation of other creatures depends on a categorical, albeit artificial, moral differentiation between us and them, one that is radically threatened by the idea of human-animal coupling. If we were to officially countenance a play of sexual desire that extended legitimately to other species, then, given our ideal of mutuality in sexual relations, all other relations with animals would be inverted too: meat-eating would be regarded as cannibalism and animal husbandry would be seen as tantamount to slavery, or slave-trading.

Be that as it may, many people have clearly found some form of sexual gratification with animals at some point in their lives. According to the Kinsey reports (now half a century old) the figure is eight per cent for American men and 3.5 per cent for women. And in rural areas of America, the figure for men who have enjoyed what the reports call interspecific sexual contact rises to fifty per cent—a figure that is, frankly, hard to credit. (It happens, according to Kinsey, mainly in the spring.)

Most sex that does occur between humans and animals is by force, so we shouldn’t get sentimental about it. Both in classical mythology and in present-day, beyond-the-limits pornography (that is to say, mainly in the fantasy life of men) interspecific sex tends to features a male animal ravishing a young woman, or, on occasion, a youth. Thus there are rampant centaurs, satyrs, bulls and donkeys, and gods that take the form of such animals. The ancient Greek god Zeus is—or was—especially fond of assuming creaturely guise for this purpose. Zeus was without prejudice regarding gender: appearing in the form of an eagle to ravish Ganymede, as a bull for Europa, and a swan for Leda.

In real life it is generally the opposite: human males are the assailants. Dumb and dependent, animals are an easy target. Sex with them is sex with unequals; and this, no doubt, is part of its attraction for certain kinds of people. With pet animals the desire for food—or, in the case of dogs, a pleasure they take in obedience—may make them unresisting partners in the displaced lusts of humans. (It is hard to see how an animal could unambiguously indicate assent, though larger mammals have obvious ways of saying no, with horns and hooves and teeth.)

The velvety testicles of tigers

Let us also not forget that there is a further set of human practices regarding the sexuality of domestic animals, arguably more perverse than the use of them as objects of sexual gratification. These are practices generally not considered abnormal at all: that is to say, the curtailment of their sexual relations with their own kind by means of castration and spaying. In this regard, let the farmer or pet-owner who is without sin cast the first stone.

Midas Dekkers is a biologist and his book reveals careful observation of animals, humans included. He draws our attention to the “splendid velvety testicles of tigers” (not much danger of anybody forcing themselves on a tiger) and explains the diverse meanings of the same gesture in different species: the dog’s kiss, he suggests, is a nudge for food, while the cat’s is part of a grooming ritual. Neither is a come-on.

Dekkers is not an apologist for sex with animals; rather, he is amused by the hypocrisies attendant on their intimate subjugation to us. And he is intrigued—who is not?—by this outer zone of human yearning. Dearest Pet is about as good a book as you could expect on a subject that still carries the frisson of trangression, the dubious allure of something that we can’t quite talk about properly. ★