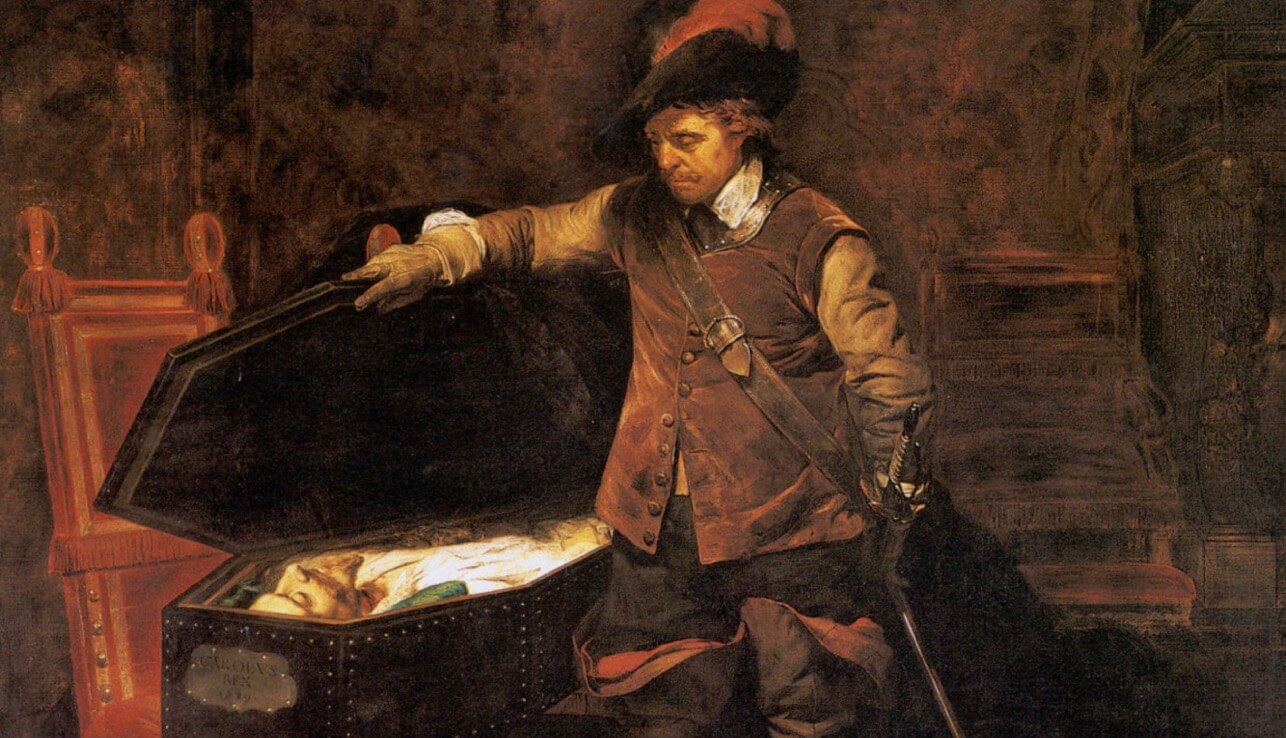 Three hundred and fifty years ago in Whitehall, in London, on a make-shift scaffold outside the Banqueting House—Inigo Jones’ then newly-built extension to the Royal Palace—the executioner’s axe fell on King Charles I’s neck. There’s a memorial service scheduled this week at the Banqueting House, but it looks as if the event will pass without any official recognition; there are no plans for the anniversary to be marked by members of the British royal family, even by the Prince of Wales, that is to say, the probable future Charles III. Our new model royals, in the face of criticism of their role in national life, are playing down the history of the institution they inhabit, wary, no doubt, both of monarchist lament and republican jubilation.

Yet the execution of Charles I was a critical point both in the political evolution of Britain and, paradoxically, in the survival of the monarchical idea. Elsewhere in the world, even today, regicide is not dead: in Ethiopia, the trial continues of the members of the Derg, the former regime responsible for the murder of the last emperor, Haile Selassie I, who was put to death on government orders in 1975. Attending the opening of that trial in 1994 I had a glimpse of what monarchy once meant, and the enduring power it retains in the political imagination.

The monarch as scapegoat and quasi-divinity

To witness the trial of a regicide was eerily archaic. First, though, some anthropology. The idea of the monarch as a victim—a scapegoat who dies for the sake of the body politic—casts a long shadow across historical and ethnographic literature. It is the central idea in Sir James Frazer’s oft-invoked but seldom read classic of armchair anthropology, The Golden Bough. The twelve volumes of The Golden Bough tell the story, found in both African and Asian traditions, of the ritual sacrifice of a divine king, one who is in a sense all-powerful, yet who finally becomes a sacrificial victim.

In the Western tradition this mythic archetype informs the story of Christ’s crucifixion. And this analogy—between the crucifixion and Charles I’s execution—was explicitly embraced by royalist apologists in the seventeenth century. In Charles I’s case the manner of his death made a martyr of a king who, by all accounts, while he was alive, was devious and manipulative to a fault. On the scaffold, the diminutive monarch acquired a stature and a mythic resonance that he had not had in life. In this sense his death was—and is—no encouragement to republicans: paradoxically, it perpetuated the power of the monarchical idea. 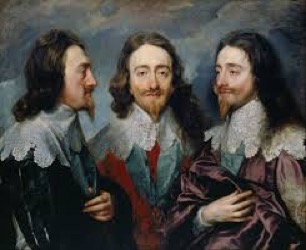 In our democratised and secularised world, regicide is a rare event. The death of Emperor Haile Selassie provides a lone example. In 1975, following a military coup in Ethiopia by a group of officers known as the Derg, Haile Selassie was murdered in his bed. Two decades later, after another change of regime, those accused of responsibility for his death were put on trial. I had the unusual experience of attending the committal proceedings in Addis Ababa—a long-delayed beginning to a trial that continues today, five years later.

The leaders of the Derg are on trial for a wide range of other crimes, including war crimes and crimes against humanity. The new rulers of the country, though they are keen to arraign their predecessors on as many charges as possible, are themselves equally anti-monarchist. They are anxious not to resurrect the memory of imperial rule—fearful, no doubt, of the potent symbolism that monarchy can still command, symbolism that, in British history, made Charles I more powerful in death than he was in life. For this reason they have refused permission for a state reburial of Haile Selassie’s remains, fearing that such an event would become a focus for popular discontent. So, as of the year 1999, the Emperor’s exhumed body still lies in the crypt of the church behind his palace. The coffin is tiny: he was barely five feet tall, even smaller than Charles I.

Despite these reservations on the part of the new regime, when it came to the trial of the Derg in Addis Ababa in 1994, the Emperor’s name was first in the roll-call of victims. The reading of the charges on the opening day of the trial was the first time his name had been mentioned in official pronouncements in Ethiopia for over twenty years. There were those in the courtroom who had been waiting a long time to hear it. Covering the trial as a reporter, I found myself seated next to one of them, Teshome Gabre-Mariam, who had been Attorney-General under Haile Selassie and, after his death, spent seven years as a prisoner in the cellars of the palace where the Emperor met his end.

We listened that day in Addis Ababa as the judge read the charges from a scarlet leather-bound book. In an account of the proceedings at the time I described the courtroom scene in these terms:

“His Imperial Majesty, Haile Selassie, King of Kings, the Lion of Judah Shall Prevail, was murdered…” [the judge] began, using the emperor’s full title and motto, “in a cruel and disgraceful manner, suffocated in his bedchamber…”

There was a general intake of breath.  The interpreter in his glass booth stopped and coughed. The ceiling seemed ready to fall. Later, outside the courtroom, the former Attorney-General exploded.

“Murder the Emperor !” he said. “A man of eighty-four.  What was the point? Those people have no honour.”

No honour. This, I imagine, was also how seventeenth-century royalists in Britain felt, or affected to feel, about the regicides. Those who condemned the king to death were, in their view, men without honour. The royalists represented the execution as monstrous, a crime against nature. And as with Charles I, the manner of the Ethiopian Emperor’s death—and the brutality of those who succeeded him—obscured the many injustices that had occurred under his rule. 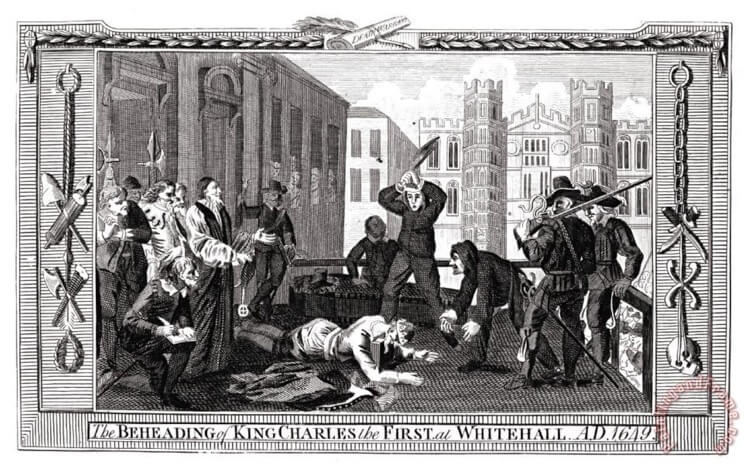 The end of divine right and the origin of constitutional monarchy

In England, after the restoration of the monarchy in 1660, the regicides—some, at least, of those who signed the death warrant—were executed in their turn. But the restoration did not turn back the tide of constitutional change. After the hiatus of the Commonwealth—and an attempt by Charles’s son, James II, to reintroduce absolutism—a new political era began in Britain with the Glorious Revolution of 1688, when James II was ousted and William of Orange ascended to the throne.

The death of Charles I marked a turning point in the idea of kingship in Britain—not the end of monarchical rule, but the end of the doctrine of divine right. It marked the beginning of the evolution of constitutional monarchy that continues to the present day. Charles I’s execution and the failed experiment in republicanism that followed preserved the institution in a new form, making possible the era of modern monarchy, where the mystical aspects of kingship are constrained and reduced by the institutions of secular government.

Globally, kings and queens and emperors have long been in retreat. There is little chance of constitutional monarchy being restored in Ethiopia today, any more than there is in, say, France. In both countries revolutions swept the idea of monarchy away with the ancien regime. Monarchs are becoming rarer—and absolute monarchs are now an endangered species, found mainly in the Islamic world. Outside North Africa and the Middle East, mystical authority is confined to the kings and emperors of half a dozen Asian polities—Thailand and Cambodia, Nepal, Bhutan and Japan. And it is unlikely that any of these colourful but anachronistic figures will ever face assassination or execution as Haile Selassie did (though the ailing King Sihanouk of Cambodia recently volunteered, in a characteristically melodramatic gesture, to offer himself up for trial on charges of complicity with the Khmer Rouge).

But that is what happened in Ethiopia. And that day in the courtroom in Addis Ababa, in the vivid absence of the long-dead Emperor, there was a whiff of the antique, quasi-divine power of monarchy, and the concomitant idea of sacrifice, the idea of a king who must die, as Sir James Frazer documented in The Golden Bough a century ago.

It’s a symbolic power that can attach itself to presidents also—to elected officials as well as hereditary monarchs—leading certain presidents to aspire actively to familial succession and the permanence of monarchy. The mystique of kingship seems never to be entirely extinguished, either by executions or by constitutions. In the courtroom in Addis Ababa it reasserted itself for a moment. And this coming week in Whitehall, despite the official indifference of the royals—and most other people in the country—there will be a trace of the same feeling in the minds of British monarchists, those remaining local devotees of the cult of kingship, as they remember Charles I on the scaffold, three and half centuries ago. ✭