Dressing up for the election

What the candidates are wearing on the campaign trail 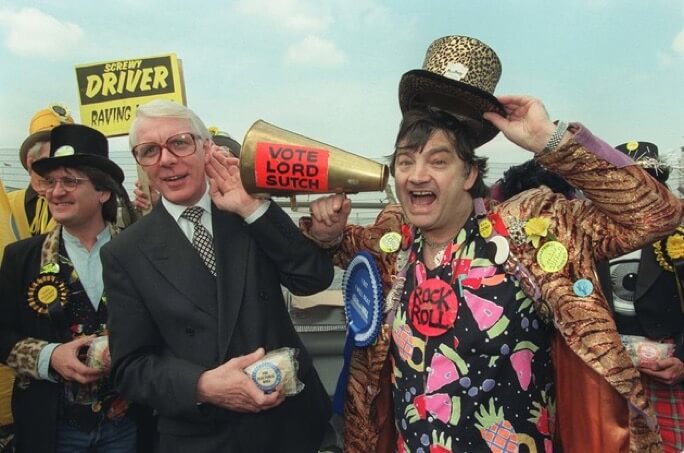 They had their gimmicks, the old guard: Disraeli with a primrose on his lapel; Churchill a bowtie and cigar; Harold Wilson a pipe and Gannex mac. But the candidates in the current election vie with each other in sartorial modesty. They don’t accessorize. Only suits are on show. And in these blue and grey outfits there is barely a flicker of character to be seen.

The candidates’ polka-dot ties are interchangeable. Party colour-coding has been discreetly abandoned. Labour’s shift of livery from red to purple, like Pepsi-Cola’s recent move from red to blue, has had no visual impact at all. Only the Liberal Democrat leader observes party protocol: Paddy Ashdown’s tie is Lib-Dem yellow, but a distinctly muted shade.

The drift away from colour coding also means that no politician of note is to be seen wearing a rosette, that curious apology for a flower that gives candidates on the stump the air of a prize bull at a fair. The red rose embraced by Labour at the last election wilts in the vase. The party is classless and colourless now. New Labour, we are given to understand, is without thorns.

The other day the Prime Minister addressed the topic of fashion, possibly for the first time in his life. Alerted to the success of the catwalk Britpack that has taken over the couture houses of Paris, John Major announced, in the unconvincingly upbeat style he has adopted for the campaign, that British fashion designers lead the world. Possibly so. But they haven’t got anywhere near the Prime Minister. Here is a man who would hardly be seen in a bespoke suit, let alone a pair, say, of Alexander McQueen’s low-slung slacks. A Labour cabinet might up their act—more Bond Street, less High Street—but the masters of the privy chamber do not venture far afield. Everything must be grey or dark blue. Tony Blair’s suits may be better fitting than John Major’s; still, they are Trust-Me suits, electable suits, step-into-his-shoes suits, striving to suggest reliability in the public mind.

Then there’s the man in the white suit, Martin Bell, the independent candidate. If you’ve seen the eponymous feature film (The Man In The White Suit, 1951), you will remember that Alec Guinness’s suit soon falls to pieces. In any case, to those born after 1950, a vanilla ice-cream coloured suit doesn’t say you’re Alec Guinness. It says you’re John Travolta in Saturday Night Fever. Or Dirk Bogarde in Death in Venice. Or Tom Wolfe in a preening author pic on the back of a paperback. That is to say, it says adolescent self-advertisement, or besotted middle age, or being more than a little bit pleased with yourself. In Martin Bell’s case—former foreign correspondent as he is—a white suit announces not so much the incorruptibility of its owner as being able to afford a dry-cleaner in a war-zone.

In Tatton, it may be noted, where Martin Bell is standing for election, the electors have another choice, one who certainly stands out, sartorially speaking. The leading fringe candidate there is the Alternative Miss World, a six-foot something transvestite from Birmingham, the sole candidate of Miss Moneypenny’s Glamorous One Party. She wears a necklace of playing cards, a birdcage on her head and a robe stitched together from manila envelopes and fifty pound notes.

Here, at last, is a candidate with a few accessories to be remembered by. The Alternative Miss World is in the long-established British tradition of electoral eccentricity and antic cross-dressing, a tradition that deserves acknowledgment in this otherwise monochrome contest, The begetter of this minority madcap tendency in British politics is the faux-leopard-skin-clad former pop star Screaming Lord Sutch, leader of the Monster Raving Loony Party and perpetual losing prime-ministerial candidate. This lord of misrule has, sadly, been compelled to withdraw from the election in order to look after his ailing mother. (What other politician, it may be asked, would do that?)

It’s surely time that Lord Sutch, hardy perennial of fringe candidates—whose political career stretches back well beyond that of Tony Blair or John Major—was given an award in recognition of his contribution to the gaiety of nations. The Prime Minister’s departing honours list is the obvious place: Lord Sutch should get an OBE, the Order of the British Empire. No, make that a barony. Then he can be a real Lord at last. Elevation to the peerage in the Prime Minister’s departing honours list would be a suitable tip of the hat from the Man in Grey to the Day-Glo Candidate—and a fitting farewell to both of them. ✭ 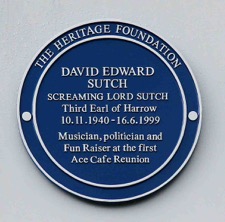 astronomer Patrick Moore and the celebrity madam Cynthia Payne, went unrecognised in the Honours Lists in 1998. And again in 1999.

Lord Sutch died by his own hand in June 1999. He left an estate valued at £250,000, but no will. In March 2000, the London Times reported that his political effects, including his clothes, were to be sold at auction.