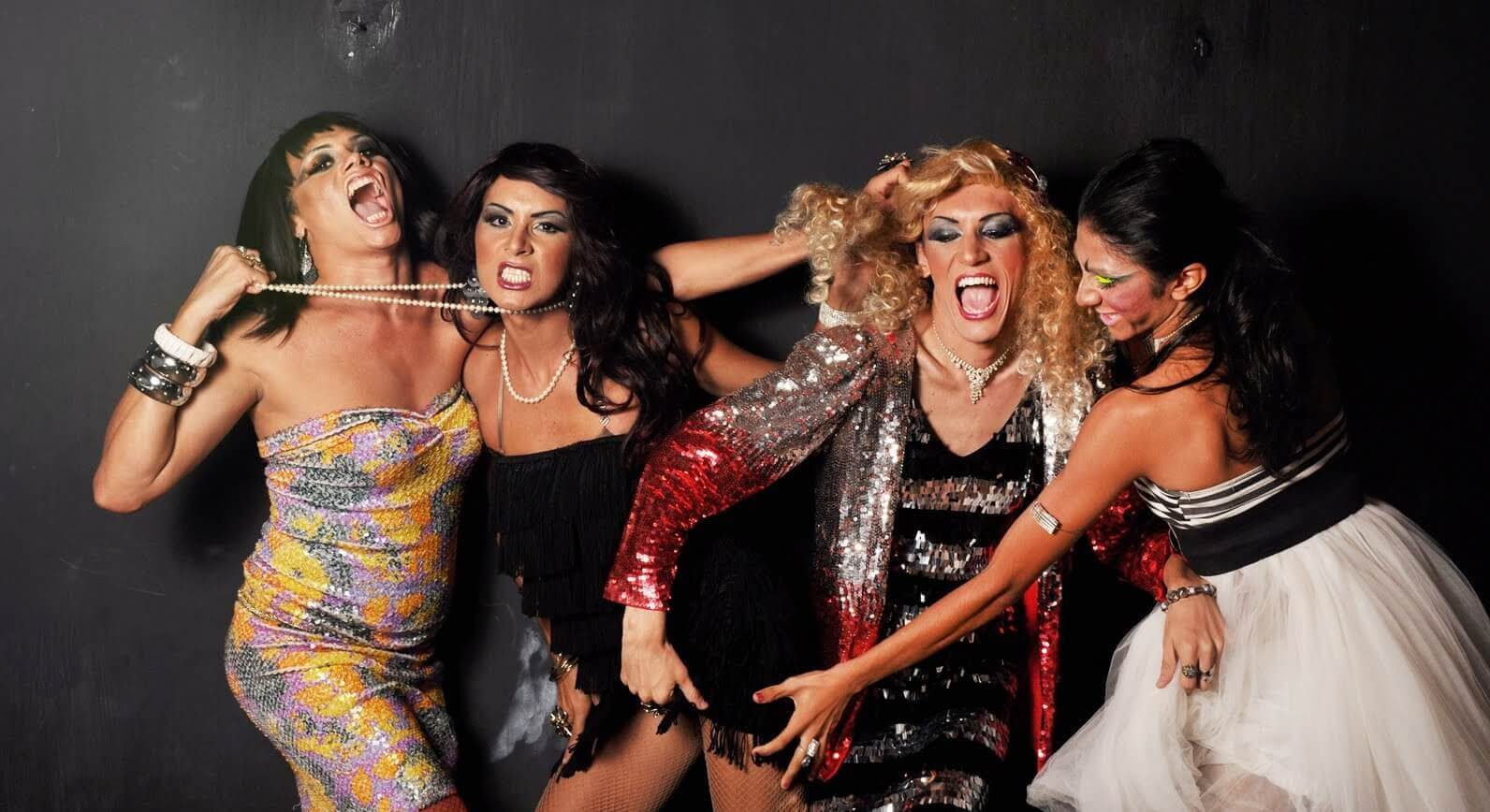 A RuPaul lookalike in a lace microskirt is plying her trade on the Avenida Augusto Severo in downtown Rio de Janeiro. She’s very tall, with radically extended eyelashes, hair extensions and a plunging décolletage. There are other travestís to be seen all along the Avenue, silhouetted by the street lights. The sidewalk is their catwalk. They step out in satin hot pants, leather bikinis and denim cut-offs, in carmine lipstick and six-inch heels—the international uniform of showbiz-style hookerdom.

Cross-dressing is transcultural phenomenon, but the startling visibility of transgendered sex-workers on the streets of Rio and other Brazilian cities is unique, rivalled only by those in Mexico City. They are easier to find than ladies of the night, or michês (male hustlers), or drug dealers, or agents of the jogo do bicho, Brazil’s illegal numbers game. They are the most ubiquitous of all purveyors of illicit pleasures. In Brazil, travestís and their clientele are an inescapable part of the economy of desire.

During carnival in Rio, in particular, cross-dressing men of all shapes and sizes are much in evidence, on the street, in the pages of glossy magazines, and on the floats of some major samba schools. There are carnival groups that parade entirely in drag. The latter, though, are amateurs, out for the day. None of them would want to be called travestí, a word that, in Brazilian Portuguese, signifies a to-greater-or-lesser-extent transgendered sex-worker. For the professional travestís, on the other hand, the partial inversion of social order that is a feature of carnival—and the pursuit of carnal pleasure that accompanies it—are a year-round phenomenon; this is their mode of livelihood. It’s their work.

What do men want?

What is it that their customers want? Travestís, it has been suggested, shape themselves consciously—to a still greater extent than other sex-workers—in the image of the sexual fantasies of their clients (who are mostly, but not exclusively, male). The living dolls on the Avenida Augusto Severo are brought into being by the yearnings of the conservatively dressed middle-aged men who peer from the windows of the cars that cruise slowly along the avenue of an evening. In this sense travestís are designer sex objects, walking embodiments of the desires of those who seek their services, the soi-disant straight men in their cars.

Who takes on work like this? In Brazil a poor uneducated gay youth from the boondocks doesn’t have a lot of choices; becoming a travestí is one. Like a castrato opera singer in eighteenth-century Italy, or a eunuch in the court of Ottoman Turkey, gender modification offers a chance of escape into a different life—risky, but with a deceptive element of glamour. Just a few travestís have managed to avoid the sex trade, becoming national celebrities in Brazil, courted by public figures and fêted in the salons of Rio and São Paulo. But most lead the harsh lives of sex workers anywhere. And to play the role, they subject themselves to painful and sometimes life-threatening surgical procedures, often self-administered: hormones and injections of silicone to simulate female secondary sexual characteristics; nips and tucks for the rest.

What travestís do not generally go in for is radical surgical gender reassignment. Sex change operations have been illegal in Brazil until very recently, despite the country’s early reputation as the world capital of cosmetic surgery. But this is not the only reason travestís don’t go further towards a transgendered state; it is also, they will tell you, because time with a full male-to-female transexual is not what their clients are looking for.

Some of these clients want travestís to perform a straightforwardly receptive role. But others are looking for a sexual partner who is both male and female, a paradoxical combination, a sexual chimera, a fantasy of polymorphous perversity, one who has the look and feel of the feminine (or a certain culturally conditioned notion of the feminine) and the penetrative capacity of the male.

Land of pantomime, land of carnival

Body modification of one kind or another is a cultural universal, found everywhere, whether in the form of male circumcision, female genital cutting, body piercing, or facial scarification— or else more recent manifestations such as cosmetic surgery, body-building and anorexia. Cross-dressing, likewise, is a global phenomenon. And transgendered people who embrace both are becoming increasingly visible in the sexual arena. These days, in telephone boxes in London’s West End, among the bouquets of leaflets advertising sexual services, it’s not hard to find ads for Brazilian-style trans sex-workers. What we don’t see much of—yet—in Britain is a Brazil-style visible public subculture of semi-transgendered, street-walking fils de joie.

If travestís are an alarming notion—alarming, that is to say, for straight people of a certain generation—a new feature of the sexual landscape that stands out among the other moral shocks of modernity, it is perhaps because cross-dressing in Britain has traditionally been domesticated as stage entertainment, in the form of pantomime, our cosy British version of carnival. In Britain, traditionally, transvestism has been desexualized by panto, made safe for family entertainment. In Brazil, on the other hand, where sex is theatre, cross-dressing in public sends a pretty clear sexual signal.

I lived in Brazil for a time and I go back there often. I’m glad, though, on balance, that Britain is the land of pantomime rather than the land of carnival. And I’m certainly thankful that I did not grow up poor, gay and ill-educated in the Brazilian backlands, with life as a transgendered, big-city sex-worker my only way out of rural poverty and prejudice. The lives of most Brazilian travestís are very rough. But the nightly show on the Avenida Augusto Severo demonstrates how, from the frequently grim constraints of their existence, they create a spectacular masquerade. ★