I was diving with my nephew Tom Walmsley off the reef at Paradise Point, ogling the parrotfish and baby sharks, when the 48-hour hurricane warning came. Tom is an underwater wildlife cameraman; he’s been working in the Caribbean for the past month. I’d just flown down to join him on North Bimini, a Bahamian islet in the Gulf Stream, sixty miles from the Florida keys. 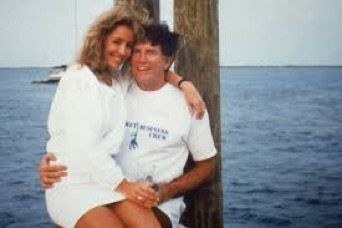 As Hurricane Georges came closer we wondered if we should leave the island. The last sea-plane was leaving for Miami that afternoon; it wasn’t due to return till the hurricane had passed. But it seemed a shame to pack up so soon after arriving. So we stayed on. We watched as the locals secured their boats among the mangroves—redoubtable plants whose aquatic roots break the huge force of the waves—then stocked up their refrigerators, filled plastic barrels with fresh water and boarded up their houses. We did our best to emulate their forward planning. Then we settled in for the storm.

The big wind whirling up from Cuba turned us into compulsive TV watchers. Weather forecasts are gripping if you’re in the path of trouble. Like following the course of a yacht race in a high wind—while you’re clinging to a buoy. Listening to the weathermen backing their bets on the direction that Georges was likely to take through the Florida Strait I could see why meteorologists anthropomorphize these overgrown tropical storms, naming them—one can only imagine—after their loved ones, or their pets. How proud little Georges Forecaster must be of his eponymous hurricane, though it lives only as long as a Tamagochi.

US television reporters presented the weather as though it were a small war. At times like these, it seems, coast-dwelling thrill-seekers in the United States rush to the beach with their surfboards to catch the shore break, while TV crews record their folly. Sensible folk stay indoors and channel-surf. But not for too long. The satellite pictures on Miami’s Channel Seven were so hypnotic they had to interrupt the broadcast to tell viewers in the Florida Keys to switch off and start packing. 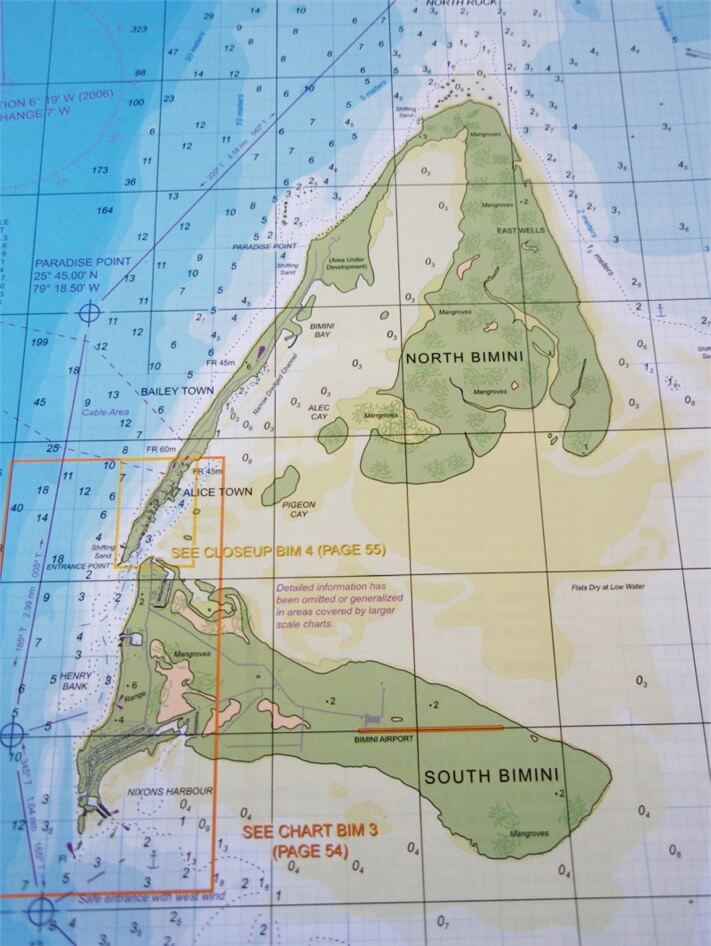 An island in the stream

Bimini has a louche reputation. It’s the setting of Hemingway’s fishing and drinking novel, Islands in the Stream, and it’s where the first black US congressman, Adam Clayton Powell, fled in the 1960s to escape charges of libel and tax evasion (accompanied by an aptly-named companion, Darlene Expose). Twenty years later, another US politician, the presidential hopeful Gary Hart, was photographed here with Donna Rice, a woman-not-his-wife, an affair that ended his hopes of the 1967 Democratic nomination.

The picture of Donna Rice and Gary Hart now hangs in the bar at the Compleat Angler, the island’s most celebrated drinking place. The barman points out to visitors—without prejudice, he says—that President Clinton has yet to make a trip to Bimini.

The island continues to draw the blue marlin crowd, rich rednecks whose idea of fun is a life-and-death struggle with a big fish. (They live; the fish dies.) There’s a scattering of minor showbiz celebrities. And these days Bimini has a novel lure: it’s become a global mecca for new-age dolphin lovers. A pod of Atlantic spotted dolphins hangs out in the shallow waters off the north shore. Many tourists, including some whose visit was cut short by Hurricane Georges, visit the island to seek spiritual communion with these wondrous aquatic mammals. For the votaries of oceanic pantheism Bimini has become a sacred site, a place of pilgrimage, the location—not the first to be so identified—of the lost city of Atlantis. 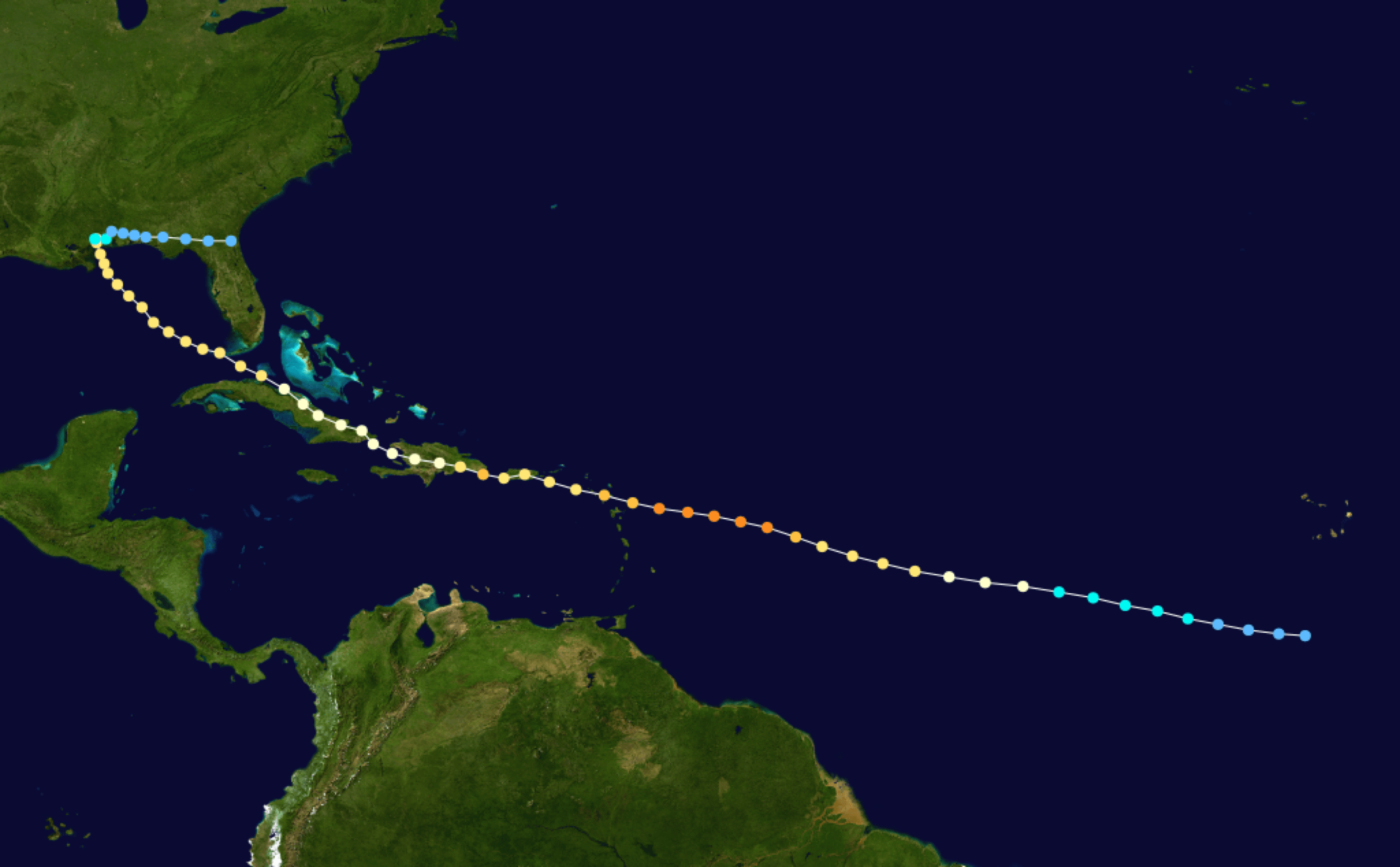 Progress of Hurricane Georges across the Caribbean

Hanging out with the dolphin-sops

Atlantis! Three or four miles out on the sand banks round the island, the ruins of the drowned city of Atlantis are visible through the water. Or so say Bimini’s new age visitors. This view is disputed, with rare unanimity, by oceanographers and archaeologists, who maintain that the patterns are natural rock formations, rather than the work of ancient masons from the realm of myth.

The Bahamian Tourist Board is studiously neutral—as you might expect. One of their handouts announces, with a judicious air, that no one has proved the Atlantean hypothesis false. This is more than good enough for Bimini’s new age visitors. These are folk my nephew Tom refers to as “dolphin-sops”. For them the sea bed off Bimini is the site of Atlantis without a doubt. And the dolphins are its citizens, sagacious denizens of an ancient republic of the deep.

For some of the dolphin sops it goes further: they believe that dolphins are reincarnated cosmonauts from a distant constellation—the Pleiades—sent to bring enlightenment to us misguided sublunary beings. Spotted dolphins, for them, are a fount of healing wisdom. For both species of cetaceamane—the soft-minded and the full-on delusional—the dolphins of Bimini hit the spot. Unlike bottlenose dolphins (the kind you can see in oceanariums jumping through hoops for food) spotted dolphins cannot be domesticated. But in the wild these animals are genial and curious, happy to play with humans.

The last vessel remaining in the dock in Bimini before the hurricane hit was multi-hulled cruise ship called Bottom Time Two (it’s a scuba diving phrase). On board was a party of dolphin-sops and their facilitator, a personable psychologist-turned-healer from California. They had been cruising the banks offshore for more than a week, she told us. The course they steered followed lines of psychic energy. She located these lines of energy by entering trance and guiding the helmsman’s hand.

The encounters they had had with dolphins, she said, were rapturous; their dreams at night mysterious and filled with light. She was sure the dolphins were dreaming too. The coming hurricane, she said, was nature’s way of telling them it was time to say goodbye.

Bemused, we bid them a safe voyage. When it came to Bimini, it seemed, as Auden wrote of Atlantis,

When the storm passes

As a zoologist, Tom doesn’t have much time for dolphin-sops. Me neither. The undersea world is miracle enough. Contemplation of the reef is a quasi-religious experience in itself: the rainforest of the deep, an underwater temple of nature constructed over millennia by armies of coral.

In the event, Hurricane Georges passed to the south-west of us. We were kissed by the storm, but it did not take us in its embrace. The sea was high; diving was out; palm trees bent like kelp in a tidal current; we lost our hats. But no houses were blown away. Tom and I had long rambling conversations; we listened to the wind. And when it was over we ventured out again.

After the storm passed we went walking out along the beach. A lone frigate bird morphed in the sky above us. We gazed at the rocks off Paradise Point that marked the reef where we had been diving a few days earlier, among the baby sharks and parrotfish. The rocks were low and dark and featureless above the water, their fantastic submarine architecture hidden, the creatures dwelling there sealed over by the ocean.

Maybe it was the influence of Gary Hart and the other reprobates of Bimini, but looking at the hidden reef felt like a kind of carnal knowledge. Seeing it from the shore was like looking at someone you’d slept with, clothed now, and walking in daylight. ★

I should have made it clear that tropical storms and hurricanes are not named on the whim of meteorologists, but rather according to an alphabetical system that is planned several years ahead, starting over each year, beginning with the letter “A”.  Thus Georges was the seventh ranking hurricane in 1998, the letter G being seventh in the alphabet. These days hurricanes are  increasing in frequency, but there are seldom more than a dozen in a year. That is why there is no Hurricane Zorba, nor Xerxes, nor Hurricane Yves. Or not yet.