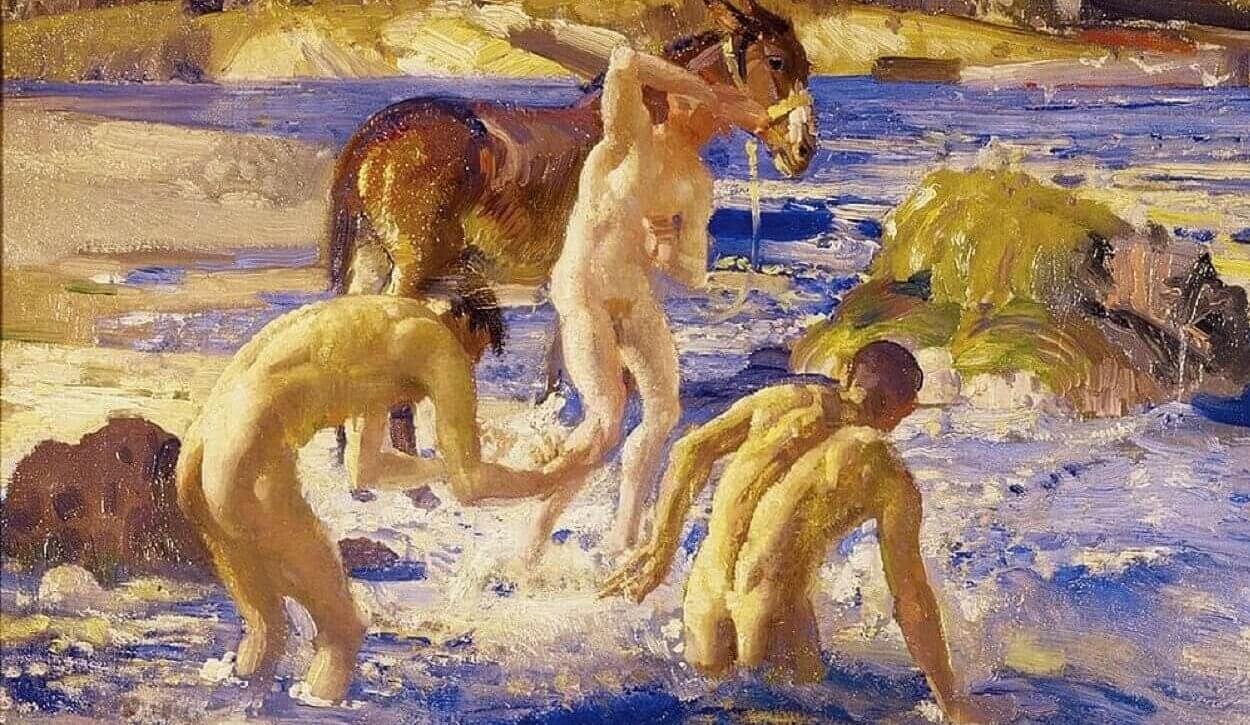 Leo, a high diver at the Royal American Shows, a travelling fair where I worked one summer in Canada, told me, as we poured paraffin on the blackened rags that transformed him into a human torch for his plunge from a rickety tower into a steel tank fifty feet below, that his was the only act in which a man traversed four elements—air, fire, water and earth—in the space of seconds.

During the dive, for an instant, he felt almost weightless, afloat in the air. When he met the water, with the flames extinguished, his body turned to lead. Then he would find himself, magically, floating once again, surfacing in the water of the tank. For Leo, it seemed, the dive was an alchemical ritual, condensed into an instant; performance art as religious experience. He was like the jongleur of Chartres—that figure of medieval legend who juggled in front of the Virgin Mary’s shrine in the cathedral as a thanks offering—or one of the wandering monks of Tibet, whose special dispensation included the instruction of village girls in whole body enlightenment. In diving, Leo used the art of the body as a means to transcendence, a free fall to bliss.

Our lives in a different element

Swimmers and divers all get a glimmer of this mystic consciousness. The photographs and the elegant (though uncredited) decorations to the text in Haunts of the Black Masseur show them with eyes half-closed, in a trance induced by waves and warm currents, or ecstatic in mid-air, caught in a jack-knife or a swallow-dive. Swimming, they are telling us, is the closest we get to unaided flight, the nearest to life in another element.

In the water, half-released from gravity, our proprioception, our sense of our physical selves, is subtly enhanced. Underwater, light is bent, so that our bodies, and the world beyond, are magnified. And our passage through water, hundreds of times denser than air, can make us feel that an army of masseurs is at work on our flesh. In Flaubert’s phrase, “a thousand liquid nipples travelling over the body”. (Valery called it, more bluntly, fornication avec l’onde). Water is a prime mind-altering substance. It’s little wonder that the Victorians put such faith in hydrotherapy, the water cure, for lunacy and dyspepsia.

Yet the cult of bathing in the West is a recent phenomenon, linked to the classical revival and the taste for nature that was kindled by the romantic movement. There’s not much in the English literature of bathing, it seems, between Beowulf’s underwater battle with Grendel’s mother (c800 AD) and Byron swimming the Hellespont in 1810. After Byron, though, comes a flood that never stops. Charles Sprawson’s book explores the growing fascination from the nineteenth century onwards with the pleasures and dangers of swimming through a wide-ranging examination of the lives and reflections of writers and artists and culture heroes.

The list is long, even when confined to the English-speaking world. There is Shelley, who could not swim and whose lifelong fascination with the sea culminated in his death by drowning off Viareggio, with the works of Sophocles clutched in his hand. And Rupert Brooke, who swam obsessively but never learned to dive. (He described emerging naked from a river in Oxfordshire, on one occasion, to find himself face-to-face with Lord Asquith, the British prime minister of the time).

There is Hart Crane, who drowned himself off the Gulf of Mexico, and Tennessee Williams, who was buried at sea in the same stretch of the ocean where Crane had died—because, he said, he had always wanted to meet him. And Jack London, who tried, but failed, to drown himself, swimming out to sea while singing death chants to the stars.

In the world beyond literature there is Captain Webb, the first cross-Channel swimmer, who met his end sucked under the rapids at Niagara in his trademark red silk swimming costume, and Johnny Weissmuller, one of the crop of champion swimmers who became Hollywood stars in the 1930s, when the fashion for swimming was at its height. Johnny Weissmuller died, unusually, on land and in bed, at the age of 80.

Charles Sprawson’s own obsession with swimming forms a modest current in this ocean of erudition. He visits ancient communal baths in Rome and North Africa; and modern ones in California, where water is a form of conspicuous consumption. Despite feats of distance swimming that rival Byron’s he confesses to a terror of deep water. Perhaps it is this that leads him to disregard what may be the most absorbing and mysterious of all the pleasures of swimming: reef-diving, gliding through the rainforests of the deep, where nature is at its most rich and strange. Nor is there much here on surfing , which is not quite swimming, but combines elements of swimming and sailing and flying. Such omissions are immaterial, however: the subject demands an encyclopaedia, which this book does not purport to be.

Swimming, one such encyclopaedia notes, in a slightly water-logged tone, “is one of man’s oldest activities”, and “probably dates back to prehistoric times”. No doubt about that. There is no other large land mammal that swims as well as humans do. This adaptability is one of our special evolutionary advantages. There is, accordingly, an unorthodox, but not implausible, theory of hominid evolution that proposes early man, not as an intrepid hunter of the savannah, but as an aquatic creature, fleeing land-based predators to float dugong-like in the warm coastal waters of the Pleistocene.

Whatever the case, at some stage the hand that swung us through the trees adapted to propel us through the water, in imitation of diving birds and amphibians. Hands, it may be noted, are more important than feet for this purpose: swimming is a partial escape from the bipedalism that is one of the things that make us distinctively human. In the water we are more like other mammals, more like infants. This, too, helps brings us closer to an antic, mystic state.

Animal mimicry is the key to swimming: the dolphin kick that augments the butterfly stroke—that whip-like movement of the gluteus maximus—or the swallow dive and frog-leg flick of the knees in breaststroke. (Frogs, in fact, were once kept in tubs by the Serpentine to instruct novice swimmers.) And fish too: Walter Pater, Sprawson tells us, said that if he could not be a man, he would have liked to be a carp, swimming forever in the waters of some royal chateau; ditto Denton Welch, Rupert Brooke, Shelley and J.C. Powys. All claimed to fancy the idea of being a fish. Baron Corvo, though, said—apparently—that he would prefer to be a crab.

Heroic it may once have been, zoomorphic it may still be, but there is also something comic about the way we bathe. For a start, the clothes that people wear. Evidently we should swim naked (as was possible, even in municipal pools in Britain, for a happy period between the wars). What with briefs and bikinis, caches-sexe and shorts that balloon in the water, and the ludicrous struggle to change behind a towel, the contemporary rules of decorum are no less absurd than they were in the age of the bathing machine.

Vanity takes its toll in comical ways. Recently I heard an eye-witness account of an incident on Ipanema beach in Rio, birthplace of the minimalist fio dental—the dental floss bikini, reductio ad absurdum of the swimming costume. A gang of youths accosted an American tourist in the surf and robbed him of all his possessions, including the haute couture swimming trunks he was wearing. As the youths ran off their victim staggered naked from the sea, clutching himself and moaning: “They took my Calvins! They took my Calvins!”

Dense as it is with quotes and paraphrases, Haunts of the Black Masseur has two notable omissions: an index and a bibliography. Jokes are also lacking, although the title is a joke of a kind, albeit a somewhat misleading one (the masseur occupies a single line in the penultimate chapter). This is an agreeably obsessive book, though, full of unusual information. It is no reflection on it—rather it is a positive recommendation—to say that it makes one want to put it down immediately and jump straight into a river, or the sea, or a pool, at the deep end. ★