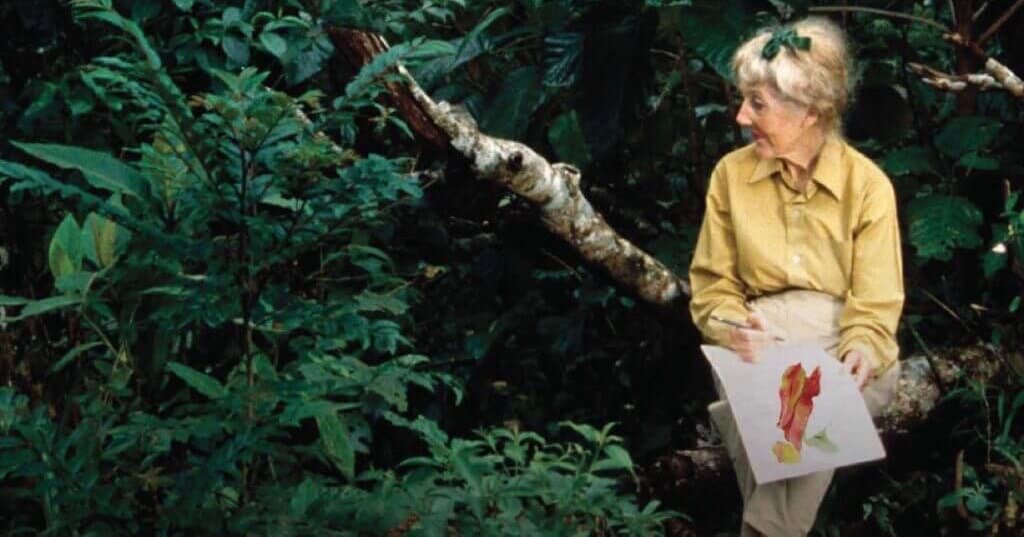 The moonflower blooms just once, for a few hours, by night, in remote areas of the Amazon. It took Margaret Mee twenty years to find one and paint it. Her next task: to save the forest that gives it life.

On the lower stretches of the Rio Negro, the huge brown river that joins the Amazon at Manaus, on the banks of its tree-lined creeks and tributaries—and nowhere else—grows a rare night-flowering cactus, known to science as Selenicereus wittii, and to the lay world as flor da lua, or the Amazon moonflower. The moonflower is a scarlet and green epiphyte that roots itself on the trunks of trees in the flooded forest, the várzea. Each bud blooms only once, at dusk, sometime between April and June, a fist-sized, sweet-scented whorl of slender white petals. By dawn the next day it has closed again, never to reopen. Infrequently recorded by botanists, never painted or photographed in nature, the moonflower was born to blush unseen. Until Margaret Mee tracked it down. 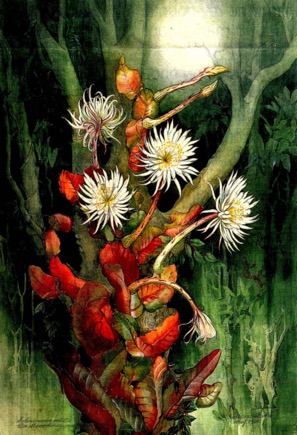 Margaret Mee is botanical artist, a species as uncommon these days as the moonflower itself. Her rendezvous with Selenicereus wittii on the Rio Negro, which produced the first image of the moonflower in full flower, was the climax of three decades spent recording the flora of the Brazilian rain forest, the world’s most extensive unchronicled botanical reservoir. The moonflower portrait is the centre piece of an exhibition of her paintings currently on display at Kew Gardens.

I went to meet her last month in Rio de Janeiro, in the house where she lives with her husband in the suburb of Santa Teresa, on the heights of the city, overlooking the Guanabara Bay. The house has been a staging-post for many plant scientists on their research trips to the rainforest. When botanists who specialise in the Amazon hear Margaret Mee’s name a wistful air comes over them. Ghillean Prance, the recently-appointed director of Kew Gardens, describes her as “intrepid …gifted…sensitive…modest…passionate…unique”. When it comes to Margaret Mee, there’s no scrimping on eulogizing adjectives.

Her extensive oeuvre of paintings, made in gouache, are the outcome of fifteen plant-hunting expeditions over thirty years. They are a uniquely rich sampling of a flora much of which is yet to be discovered, let alone recorded. Several of them record the only certain sighting of an otherwise unknown plant: altogether she has discovered at least eight new species, four of which are named after her: margaretae or meeana.

In her paintings they come alive, wild with colour, pictured at their peak moment of blooming. She does not paint in the herbarium, only in the field—travelling in small boats, hiring a local boatman to assist her, for months on end, deep in flooded forests. These epic journeys in search of the glittering prizes of the plant world combine the tradition of pioneering 19th-century botanical illustrators such as Marianne North with that of writer-travellers like Mary Kingsley or Isabella Bird. The acceleration of environmental destruction in the Amazon today gives Margaret Mee’s work an additional, tragic significance. Many extraordinary plants there are threatened with extinction, doomed to become botanical dodos. For some of them her paintings will be the only record of their ever having existed.

To achieve the desired level of realism in her painting she has to work fast: a vine brought down from the rain forest canopy can wilt in half an hour. During our conversation in Santa Teresa she describes a working day that starts before dawn and ends after dark. It might include, for instance, working underwater with a bignonia in order to keep the flowers open longer, or keeping plants in a portable fridge. Even living plants in botanical gardens don’t satisfy her desire for naturalism.

“You can’t paint from the flowers in a botanical garden, even living specimens,” she says. “Cultivated flowers grow differently and look different.”

This Fitzcarraldo of flowers is a small, slight, spry woman of 79, with winning blue eyes and long, wispy hair, which she keeps pinned up under a huge straw hat. (In the rainforest people envy her hat, which guards the wearer against both sun and rain. It has been tried on, she notes, by villagers and river-dwellers all up and down the Rio Negro.)

To see Margaret Mee in her element we should imagine ourselves on the river, or one of its tributaries, floating slowly through dark, petal-strewn creeks in the flooded forest in a narrow skiff that is overflowing with woven baskets full of orchids and bromeliads. It is early in the morning. The boat is a floating botanical garden, an ark for plants, with the artist poised in the prow, her paintbrush hovering over a flower, hair trailing in the water like Spanish Moss, while dawn turns the swirling river to quicksilver and the uirapuru bird sings in the trees.

Such idyllic moments recur in Margaret Mee’s account of her life as a plant hunter. She has seen dangers too. She lists them for me: malaria, hepatitis, near-death by drowning, murderous gold prospectors, blood-sucking buffalo gnats, toxic frogs, snakes and scorpions. Plus vampire bats and jaguars. Still, she says, it seems to her that life is safer in the jungle than in the city these days. 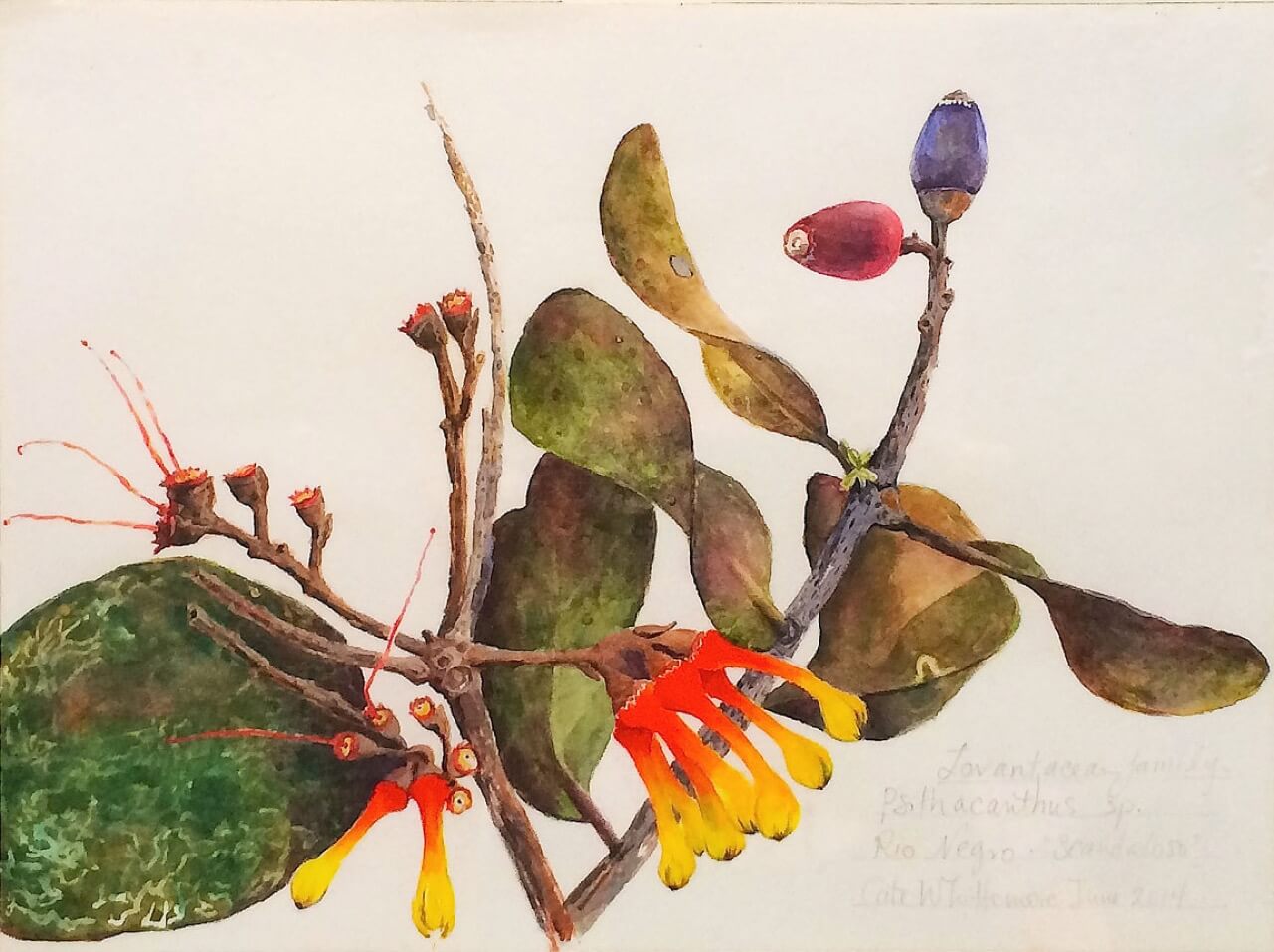 It is salutary to learn that this jungle life—and her work as a botanical artist chronicling tropical rainforest plants—did not begin until she was nearly 50, shortly after she moved to Brazil. During her youth in London in the 1930s Margaret Mee’s principal interest was not plants but politics. As an exchange student in Germany in 1933, she had witnessed the burning of the Reichstag, and joined the communist party. She married a trade unionist, and became the delegate of the Union of Sign, Glass and Ticket Writers to the TUC. During the World War II she worked as a draughtswoman in an aircraft factory. After the war, by now in her thirties, she enrolled at Camberwell School of Art, studying there and at St Martin’s, where she met her second husband, Greville Mee, a commercial artist by profession.

Together they went to Brazil, where Margaret’s sister lived. Greville Mee set up a studio in São Paulo while Margaret began to sketch the plants of the Mata Atlantica, the forest that once ran the length of the Brazilian coast. Finally, in 1956, at the age of 47, she made her first visit to Amazonia.

Since that time she has painted exclusively the flora of the rainforest: orchids, cacti, Clusia—a family that comprises mainly creepers and stranglers—and the bromeliads—a large and diverse group that includes Spanish Moss and the pineapple. Once, she notes, she repainted a Madonna in a mission church at Sao Gabriel de Cachoeira on the Amazon. This was in order to repay the hospitality of the fathers there. Apart from such acts of gratitude she has been for thirty years a votary exclusively at the temple of nature. 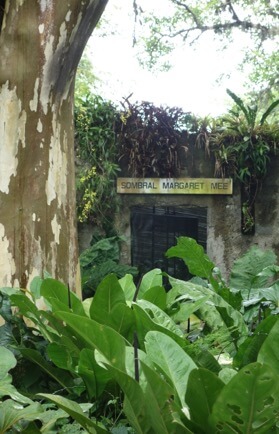 Margaret Mee’s long pursuit of the moonflower qualifies for a place in the annals of magnificent obsessions. She saw the plant first in 1965 while travelling on the Rio Negro. Then, in 1972, she came across a specimen attached to a floating branch. It had fruit but no flowers. Ten years later she caught a glimpse of one in bud, but the creek where she saw it was so overgrown and inaccessible that she was unable to find her way back there in the dark. When she returned in the light of day it had flowered and faded and closed forever.

“On every trip I made to the Rio Negro,” she says. “the moonflower was in the back of my mind.”

“I heard rumours of it in Santarém and elsewhere. Sometimes I would cross the river if I saw a flash of scarlet in the forest, just in case.”

Finally one afternoon on a remote tributary of the Cueiras River she saw Selenicereus wittii in bud on a tree trunk. She painted it there and then, waited till nightfall for it to flower, and painted it once again. Then she took it and froze it—in the portable fridge she carries for such eventualities—to preserve the fast-fading pink of its sepals.

The fate of the forest

The moonflower trip, Margaret Mee’s fifteenth plant-hunting expedition, turned out to be a triumph. Now, though, she says, each time she returns to the Amazon she wonders if it is going to be the last time she goes there. It is not that age will hold her back—not floods, nor fevers nor even her newly installed artificial hip. What she cannot bear is seeing, year by year, the forests in which she travels felled and burned, reduced to mud and ash. The passionate distaste felt by some environmentalists towards those who kill for sport is directed in Margaret Mee’s case to those who destroy trees for short-term profit.

“The last journey nearly broke my heart” she says. “All the way up·the Rio Negro the forest had been burnt down for charcoal.”

“The land is useless for agriculture, so they simply cut the forest down and burn it. After that there’s nothing. We went through miles and miles of blackened tree stumps where a few years ago there was primeval forest. It can never grow back. There was a black haze over the river all the way.” 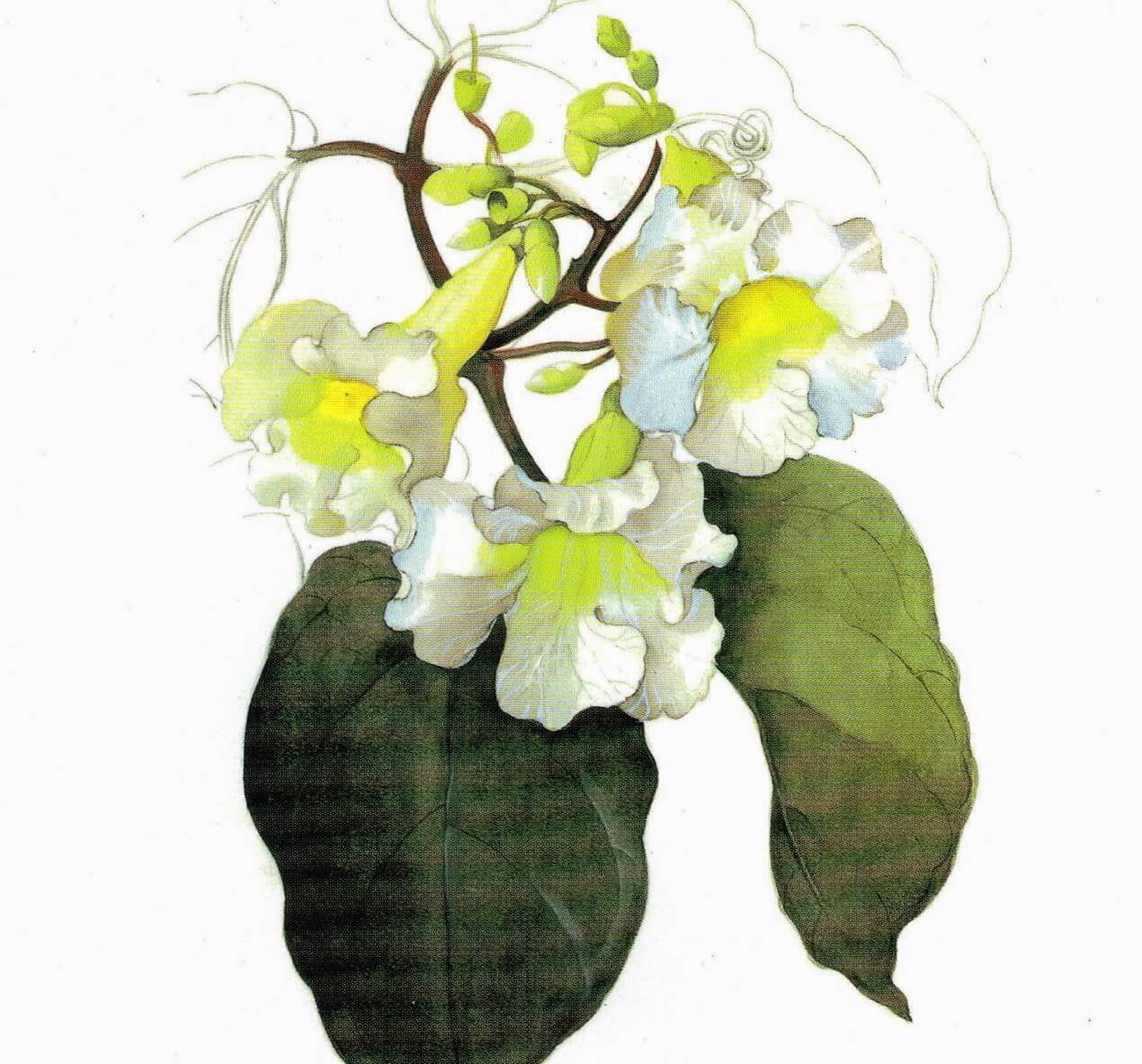 “Then there are the dams.” she continues. “Vast areas of forest are disappearing under hydroelectric schemes. These bring no benefit to the people who live in Amazonia. It is a terrible tragedy. What can be done? What can I do? There are so many flowers there left to paint.”

Botanists say only a tiny proportion of the plants in the Amazon has even been identified. The destruction is well documented. Each week that passes sees hundreds of undiscovered species destroyed; each year an area of the forest the size of a small country goes up in smoke. Such shock-statistics have become an environmentalist cliché. But the destruction does not cease, it gathers speed. Witnessing the conflagration of the rain forest, Margaret Mee feels as angry as she did when she was a student watching the Nazis burn down the Reichstag. In her old age, she has become an activist once more:

“We must be hopeful. Every biologist knows what is happening is a disaster. And there are many people in Brazil who are desperately trying to do something.”

“Somehow,” she concludes, “they must find the political will to fight it. And we must help them. The most important thing my work could do would be to contribute to this struggle.”

Margaret Mee died in car accident in England shortly after this interview was published, a few days after the publication of her book, In Search of Flowers of the Amazon Forests (1988). A further selection of her work, now owned by the botanical gardens at Kew, was published posthumously as The Flowering Amazon (2006).