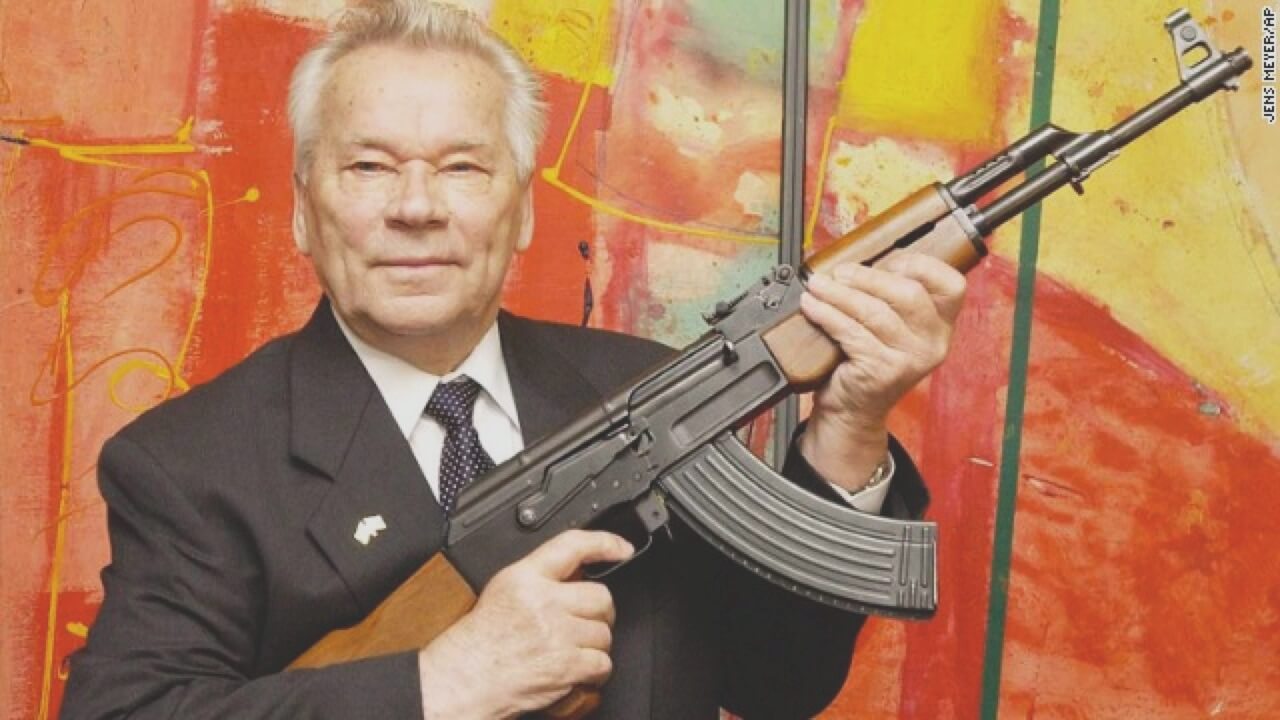 On a hot afternoon this summer I wandered into the Museum of Mankind in London, past the Easter Island statue in the entrance hall, up to the first floor displays, stopping to gaze at a case of nineteenth-century throwing knives from Central Africa. The shimmer and glint of the burnished iron blades had a mesmeric effect: I was back in Somalia, two years ago, on a day shot through with the threat of violence.

The knives in the display at the Museum are baroque, curvaceous, foot-long, many-bladed things—iron boomerangs, barbed and bifurcated, ribbed and fluted, covered with intricate acid-etched calligraphy. The anthropologist Emil Torday, who collected them in the early years of the twentieth century, described them glittering in the sun “as if they were thunderbolts”.

“A shining mystery,” he called them, “that whirls with a weird hum through the air, strikes, rebounds and returns to the attack.…”

It’s not clear whether or not Torday actually saw these nineteenth-century terror weapons in action. Most of those at the Museum of Mankind are too ornate for practical use. Their many curves and projections make them more like sculptures or ideograms than functional tools of war. At a certain point in their evolution, these objects ceased to be used for offensive purposes, becoming more valuable as a form of currency. Yet the threatening gleam of their blades can still produce a chill on a hot day.

In Arabic literature there’s a wonder-tale genre in which the narrator stares into a well, falls into a trance, and finds himself transported without warning to a distant city. Here he spends a lifetime. Then he is then returned home to his starting point—to find himself still staring down into the well, with barely an instant having passed.

There in the museum, in the heat of the afternoon, as I stared at the knives in the glass case they morphed into the curved magazines of Kalashnikov rifles, glimmering in the back of one of the crudely customized four-wheel drives favoured by the militiamen who terrorise large stretches of Somalia. I was back in Mogadishu in 1993, at a roadblock with a group of aid workers who were trying to cut a deal with some gunmen for the safe passage of a food convoy. The gunmen were part of a well-worn protection racket that had held up huge quantities of relief food in the port and condemned tens of thousands of their fellow-Somalis to starvation. To watch the aid workers negotiating with these gangsters was to register in quick succession the rage of powerlessness, the thrill of ambient violence—and the allure of fire-power.

The favoured vehicle of Somali gunmen, then and now, is a Landrover, or its rival, the Toyota Landcruiser, with bodywork cut right down and an anti-aircraft gun mounted on the back. The result, called a “technical”, or “tekniko” (from the Italian, Italy being one of the former colonial powers in Somalia), is spray-painted, often in the brightest possible colours, a psychedelic parody of camouflage—one that a New York subway artist would not disown. Somali technicals don’t try to conceal themselves. On the contrary, with a dozen gunmen hanging on the back, they are designed—as throwing knives once were—to strike fear into the heart of the beholder. Since most of them began life as aid agency vehicles, the rearranged body work and the paint-job have the additional effect of disguising which of these humanitarian organizations has been accorded the privilege of being robbed of their vehicle, and by which militia.

For foreign aid workers in Somalia the technicals, with their crews of smiling hoodlums, were an emblem of the danger and excitement and ethical dilemmas of working in the war zone. The protection racket that the militias operated was a horrible charade: they were paid—in US dollars—by the agencies, under duress, mainly to act as guards against the threat of themselves.

Every aid worker knew this. I wonder how many of them had to stifle an impulse to grab an AK-47 at the road block and reclaim the car, as I found myself doing? For humanitarians (as aid workers like to think of themselves) the strength of the homicidal impulse—suicidal in this case—can come as a shock.

Aid workers often talk about empowering people. For young militiamen in the disaster zone empowerment comes from the barrel of a gun. And in Somalia at that time relief agencies were forced to collude in their empowerment. In Somalia, too, as elsewhere in the world, north or south—in fact anywhere there is poverty, weak government and no effective gun control—the automatic rifle, the source of this power, is part of a youth aesthetic. Wrap-around shades, a gold watch, a Kalashnikov brandished above the head. The latter is both a fashion accessory and a meal ticket.

In Sudan—not yet as chaotic as Somalia but possibly heading that way—they have a catch phrase that could have been thought up by an ad agency: Kalash au bilash; Kalash begib al kash—“You’re trash without a Kalashnikov; Get some cash with a Kalashnikov.” Small arms such as these—so-called small arms—are user-friendly, easier to operate than a computer. They are more beautiful too. The ubiquitous AK-47—the Kalashnikov—a legacy of the cold war and the Warsaw Pact, made in Russia and half a dozen other countries, is a wondrously simple weapon. Its graceful, forward-curving magazine has become the universal emblem, successively, of liberation armies, insurgents, warlords and child soldiers. The desire to cradle one in the crook of your arm, to feel the pressure of the trigger, to sense the life and death power that could be yours—such disturbing impulses get stronger the longer you dwell in disaster-struck countries, and the more threatened you feel.

Last year I made a documentary film in Sudan, the land where the throwing knives came from. They don’t have Somali-style technicals there—or not yet—but there are guns in plenty. I was working there with a commander in one of the Southern rebel armies named Bapiny Tim Chol. Bapiny had also been a video cameraman, making training films for the rebel forces. He talked of his camera in the same tone of admiration and affection as he did about his gun, as an object where beauty and utility were fused. On the front line, he had carried a Sony camcorder along with his AK-47. The camera, he liked to say, was a weapon too.

For me, apart from the odd turn at road block, a gun is an object of fearful contemplation rather than potential use. But, as Bapiny pointed out, where I come from I don’t need a gun to survive.

A Sony Walkman of weaponry

There’s one kind of weapon that he and I can agree about, though. It’s a weapon no one should have to use: an anti-personnel landmine. More dangerous than a gun, more terrifying than a throwing knife, landmines have their own special allure.

Consider the Italian anti-personnel mine called an SB-33. This device is the acme of the mine designer’s art: a startlingly seductive object, palm-sized, pebble-shaped, subtly asymmetrical, with a synthetic skin shagreened like leather. It is truly a designer-mine, as beautifully designed as a Kalashnikov or a throwing knife. It’s the Sony Walkman of weaponry. Writing about this mine at the time of that visit to Somalia I described it in these terms:

The neoprene pressure-plate of an SB-33 is elastic to the touch, with the pleasant short travel and bounce of computer keys. The plastic that makes a mine like this so troublesome to detect also makes it soothingly innocuous to the eye. It simply does not look like a weapon.

there is a powerful impulse to cradle it in your hand, oblivious of the fact that this paradoxical object is designed not to be seen—and that if you touch one that has been activated it is likely to be the last thing you will ever see.

The SB-33 is still in production, but there is hope that an international treaty to ban landmines currently under negotiation will make it a thing of the past. How much better a place the world would be if landmines were only to be found in museums, alongside throwing knives. How much better if they could become objects of contemplation rather than use, if we could look forward to seeing a dummy SB-33 in the Museum of Mankind, in a glass case next to the throwing knives. And an AK-47 too, next to a handful of spears. And, finally, an entire Somali technical, with its faux-camouflage, shipped from Mogadishu, on display—with or without dummy armed hoodlums on the back.

Such a turn of events might mark the longed-for end of the sway of men of violence in the lands of the global periphery, and bring closer the day when we can study the aesthetics of terror as plastic art rather than a technique of intimidation and brute survival. 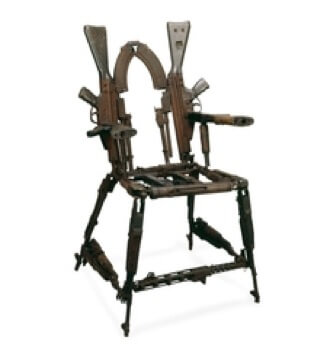 In the African Collections of the British Museum, where the contents of the  former Museum of Mankind are now housed, there is a chair made by a Mozambican metalworker from the dismantled components of a dozen or so AK-47s and other guns. Apart from ploughshares, has a better use ever been devised for superannuated weaponry? The chair can’t be called a thing of beauty, but it is solidly made—and surprisingly comfortable to sit on. The man who made the chair has recently been commissioned—with a number of other sculptors in metal—to make a tree out of decommissioned guns.