An infant orang-utan is a beguiling creature. With its russet-coloured body hair, wrinkled countenance and quizzical expression, it is more appealing than a human baby. And much less noisy. So, although it’s disturbing, it’s not so surprising to read that in Borneo, one of the last redoubts of this reclusive species, immature orangs are abducted at the rate of three or four a month from forest reserves—some of them for sale, it is claimed, to childless human couples.

Orang-utans are also exported from Borneo to Taiwan and Thailand, where they are popular as pets. It’s a clandestine trade; many die on the way. According to the Orangutan Foundation, which supports rehabilitation centres for captive orangs in Borneo, about half a dozen animals are killed or die for every one that survives.

Unfortunately for South-East Asian ape-fanciers, adult orang-utans—males at least—are intensely anti-social and can become quite aggressive. (Human adolescent males can get this way too, of course, but they usually recover.) In the wild, adult male orangs just get more and more solitary, wandering alone, arm over arm, year after year, through the forest canopy that is their home, descending from time to time to mate with willing—or not so willing—females.

Orang-utans, we are told by Biruté Galdikas, a researcher who has studied them for over 25 years, reproduce at a significantly lower rate than humans, slower than almost any other mammal. This, combined with the destruction of their habitat and direct predation by human beings, is why they are the rarest of the great apes—rarer than gorillas, much rarer than chimpanzees.

And this must be why they have become so fashionable. Not only in Taiwan, but also in Hollywood. First there was Clint Eastwood and Clyde in Every Which Way But Loose (1978) There was a sequel to the film, but the original Clyde died before the first was released, allegedly as the result of mistreatment by his trainer. This year there will be a Flintstones movie. And of course there is Planet of the Apes, the endless 1970s series of allegorical futurist fantasy movies. In the Planet of the Apes series orangs feature as wise elders, while chimps are generally malign and gorillas are goons. There’s nothing like being a seriously endangered species to make you popular with humans. As the most silent, undemonstrative and impenetrable of primates, orangs serve as a blank slate for human fantasy.

And while orang-utans are on their way to becoming the film industry’s favourite anthropoid, replacing chimps even in the tea-party stakes, non-human primates of various kinds are also having a run in the contemporary English novel. Brigid Brophy, Sean French and, most recently, Will Self have all written stories with non-human primates as protagonists. Terry Pratchett’s DiscWorld features a character called the Man of the Woods (the English translation of the Malay word orang utan). The Man of the Woods is described, aptly, as “a red demon with a face like a surprised coconut”. 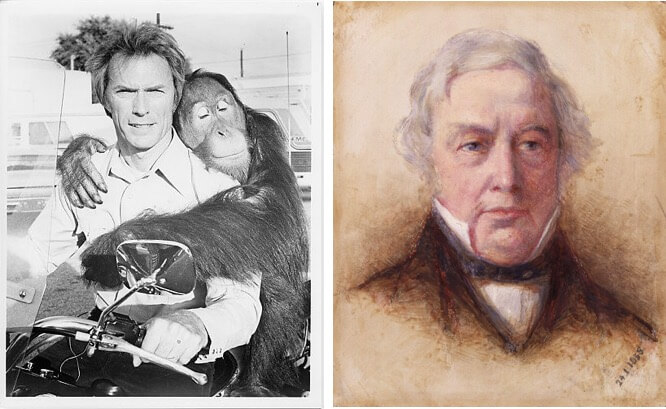 Left: Clint Eastwood and Clyde in Every Which Way But Loose. Right: Thomas Love Peacock

From Mansfield Park to Melincourt Castle

The history of simian symbolism in English literature goes back much further than this, though. With a general election imminent in Britain, it’s an apt moment to consider one of the ape’s earliest novelistic incarnations, in Thomas Love Peacock’s satire Melincourt, where a character named Sir Oran Haut-Ton becomes a member of Parliament.

Published in 1817, a year or two after Jane Austen wrote Mansfield Park and Mary Shelley wrote Frankenstein—two years after Britain won the Battle of Waterloo—Melincourt begins as a parody of Jane Austen and turns into an extended skit on the political and philosophical ideas of the time, a comic burlesque that has led the critic James Wood to compare Peacock to Martin Amis.

The heroine, who is the heiress of Melincourt Castle in Westmoreland, knocks spots off any of Jane Austen’s female protagonists. She is a young bluestocking, fired with the ideas of Mary Woolstonecraft. Politically correct to a fault, she boycotts sugar because it is the product of slavery. As does her admirer, the enlightened aristocrat, Sylvan Forester (modelled on Peacock’s friend, the poet Shelley). A follower of Rousseau, Sylvan Forester is an enthusiast for noble savagery. The eponymous Oran, a mysterious figure recently arrived from Angola, suits his purposes admirably. In order to expose political corruption Sylvan buys a baronetcy and a parliamentary seat for Oran in the rotten borough of Onevote, and there is talk of him becoming Prime Minister.

At the end of the novel the mistress of Melincourt marries Sylvan Forester and Sir Oran moves in with them, to live, presumably, happily ever after. It’s a cross-specific ménage à trois that would be of interest to primatologists. Or to film makers. For Melincourt is surely made for the screen: Gorillas in the Mist meets Mansfield Park. With its ecological angle and hot-button politics, not to speak of the prime opportunities it offers for English actors with cut-glass voices, a film of Melincourt would surely sweep the Oscars.

Happily, despite his name, Peacock’s Sir Oran Haut-ton is not, in fact, an orang-utan, but a chimpanzee. The apes we now call orang-utans were unknown in Europe in Peacock’s time; the term was applied to chimpanzees until the mid nineteenth-century. So, if Hollywood really has to use animal actors, the future film of Melincourt should be made with a chimpanzee in the leading role, not an orang-utan. And this would be a good thing: chimps are more tractable actors; and a less endangered species. If chimps were to became fashionable in Hollywood again, then the harried orang-utans of Borneo, the last of their kind, could retire and be left in peace to wend their solitary way through what remains of the Asian rain forest. ★