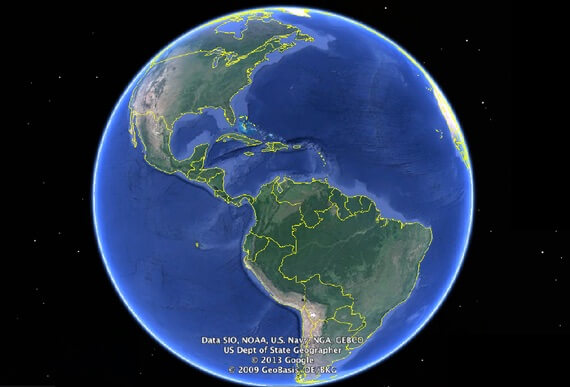 A reader in Ecuador takes me to task over the use of the word “American”. Why, asks Lincoln Reyes, is it routine to use this word, without qualification, as a synonym for a citizen of the United States when the majority of inhabitants of the continent—Americans, properly speaking—are, like him, not from the US, but from one of the other countries of North, South or Central America?

It’s a time-honoured complaint. In particular, if you are from anywhere in Latin America, it can be a constant irritation to be routinely written out of the geography of the continent that gave you birth. No wonder, says Lincoln Reyes, people like him regard the United States as an imperialist power when it appropriates the entire western hemisphere for its own exclusive domain. How, he asks, do I think it feels to be Mexican, Chilean or Canadian, confronted every day with such linguistic chauvinism?

I guess Mexicans and Canadians and Chileans have got used to it by now. But that’s because they haven’t had much option. True, it’s not impossible to change the name of a country: it was only yesterday that the Democratic Republic of Congo was Zaïre and Myanmar was Burma (though in the case of Burma there’s internal resistance to the change). Renaming the most powerful country in the world, however, is not really on the agenda. When Osama bin Laden declares war on “America”, we know he does not mean Ecuador, or Mexico or Chile. And this is not going to change.

But this column is not one to turn its back on a lost cause. So let us ask why, in what in other respects is an age of political correctness—of sedulous public avoidance of terms that can cause offence to nations or ethnic groups—the chauvinist use of the word “America” has generally been exempted from reproach. The United States is the very home of political correctness. In this sense Lincoln Reyes is only suggesting that it should take a dose of its own medicine.

Does the US have some proprietorial claim on the name of the continent it occupies? Some kind of historical precedence? Not at all. Amerigo Vespucci was an Italian who almost certainly never set foot in North America. But he did explore the coast of South America; and in the sixteenth century a German cartographer named the southern part of the continent after him. Only later was the term extended to include the north. So the US is a latecomer. When it calls itself “America” it is as though, say, the Republic of South Africa called itself simply “Africa”, or the Federal Republic of Germany claimed the name “Europa”.

Nor is the other part of its name—“United States”—the preserve of the authors of the US Constitution. Until the 1980s the official name of Brazil was Os Estados Unidos do Brasil. (Brazilians may have this in mind today, as 7 September is Brazilian Independence Day). Ditto Mexico. Luckily there are no other claimants for the names “Brazil” or “Mexico”, so they don’t need qualification; and in both cases the countries have dropped the “Estados Unidos”. So I think even Lincoln Reyes might permit the USA to continue calling itself the United States, as long as it foreswore the unqualified use of “America”.

A reform movement of the kind he is proposing faces another problem, though: what would be the appropriate term for US citizens? United Statespersons? Usanians?  These terms are unlikely to catch on. If we were to follow the Reyes Rule we would have to refer to them as “people from” or “citizens of” the United States. Both these phrases take up a lot of breath.

We all talk about the US a great deal, so there’s a need for short words and synonyms to avoid monotony. And synecdoche to avoid redundancy. “Washington”, for example, is used routinely, in and outside the country, to refer to the US government, just as “America” stands for the country itself. In each case the whole comes to represent a part. But it seems there is no figure of speech that can produce a single concise and acceptable English term for the inhabitants of the US. “US citizens” is the closest there is. There’s a word in Spanish, Estadounidense, but it is hard for Anglophones to get their tongue around it. Gringo, of course, is the word most used by Spanish speakers. But apart from its pejorative overtones, the word gringo is not specific enough. Canadians are gringos; and you and I, if we are anglophone, are probably gringos too, whether our skin colour is white or black. Contrariwise, in some parts of South America “gringo” is used for anyone who is fair in colouring, whether they are native or non-native.

So much for gringo. What about yanqui? This is pejorative too, of course. And the word yankee, in its English spelling, means something different and more specific within the US. In South America, in fact, the use of “yanqui” is a reversal of the rhetorical strategy that has enshrined the word “American” globally as a synonym for US citizen. People in the US, by appropriating the continent and calling themselves Americans, have taken the whole for the part; while Spanish speakers, in borrowing “Yankee”—originally the term for a New Englander—and extending it to the whole of the United States, have used a part to signify the whole, or a larger part of it.

In the US it is the opposite: the primary meaning of the word has shrunk still further. Today the Yankees are a New York based baseball team. And in British English the cursive form “Yank” has acquired an antique, jocular air. The word keeps company with expressions like “Old Blighty” and “Johnny Foreigner”. Most of us haven’t used the word “Yanks” for yonks. If political correctness does not proscribe such a term, style and good taste do.

Let us, then, register the justice of Lincoln Reyes’ protest, even as we shrug regretfully and move on. It should also be noted that, as a citizen of a country called Ecuador—referring to the Equator—he is not in the strongest position to object to the appropriation of geography in the cause of national identity. There are, after all, a number of other countries in the world that lie on the Equator; and any of them could claim this name for their own. I don’t suppose people in Equatorial Guinea are losing sleep over Ecuador’s bid for nominal rights over the noughth parallel, but if my Ecuadorian correspondent is serious about curtailing US linguistic imperialism, he may also have to consider the case for changing the name of his own country.

Reclaiming the words “America” and “American” for all peoples in North, South and Central America may be a lost cause, but it has a venerable history, beginning, as one reader, Robert Del Quiaro, remarked, with José Marti, the founding father of Cuban independence. (The same correspondent pointed out that Mexico’s official name is Los Estados Unidos Mexicanos, a fact which I have now incorporated into the article above. Thanks.)

John Ryle is mistaken in feeling “that Mexicans and Canadians have got used to it” (“The trouble with Americans, October 18). Many of us are angry about having the word “American” used to refer only to United States citizens. It’s less than correct, and it has a tendency to make us feel ignored and cranky, which is unpleasant. There’s an alternative. An appropriate name for citizens of the US is Usians. The precedent has been set with words such as Argentinian and Canadian, where the final “a” of the country’s name is replaced by “ian”. Or perhaps Usan (as in Ugandan, Indian, etc) would be easier to spell.

Denise Barstow wrote as follows from Eybens in France

With reference to John Ryle’s article (The trouble with Americans, October 18), I recall a cross-cultural communications class at the School For International Training, Brattleboro, Vermont, where experts regularly referred to American citizens as US Americans, pronounced YOU-ESS-Americans. This seemed to be the agreed and preferred term among US experts in this field. ★