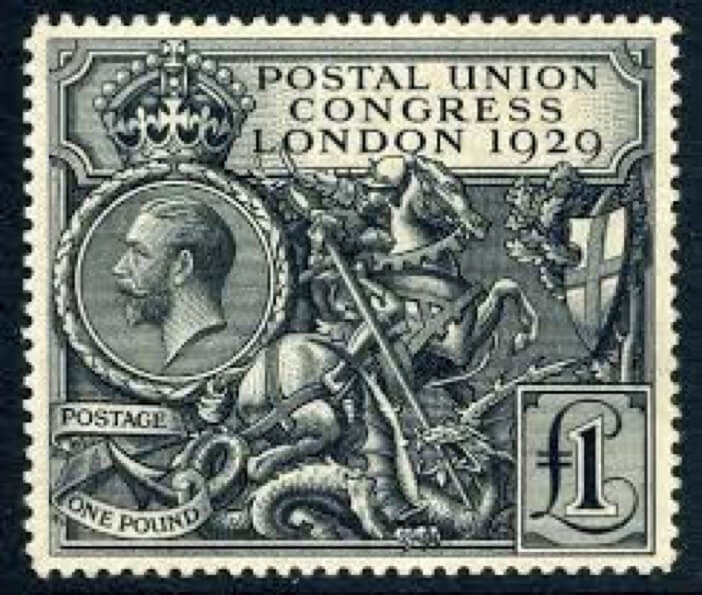 I was a child philatelist, like many of my peers. But stamp-collecting has fallen on hard times. It’s so out of fashion it makes train-spotting look cool. And the postal service seems to be in decline too, at least in the UK. So it was in a spirit of nostalgia that I set off for Islington this past week, to visit Stampex, Britain’s biggest philatelic exhibition.

It was the day of the postmen’s  strike. No letters came. Their absence was palpable, from the front door to the breakfast table. No new mail-order catalogues, no charity appeals, no PR hand-outs, no subscription reminders, no news, no billets doux, no invoices, no cheques, no postal orders (do they still exist?). Foregone the pleasure of sorting welcome from unwelcome mail: the former to be opened eagerly, savoured and devoured, the latter consigned to the Gehenna of the rubbish bin.

A day without a letter is a day that starts awry, bereft of the pleasure of anticipation, the inspection of the item of mail for tell-tale marks of its origin—for the writer’s hand in the lines of the address, for the feel and smell of the envelope, for the cancellation mark, and for the child-like thrill of novel stamps from other countries—windows to another world, bright with birds and animals. (Or if not birds and animals, then cultural icons, historical monuments, national heroes or technological marvels.)

“The stamp”, writes David Scott, in a recent book on semiotics and philately, “is an exceptionally complex sign”. Indeed. Postage stamps contain about as much human-readable information as it’s possible to get on a square inch—or less—of paper. A stamp is multifunctional: it is simultaneously a receipt, an undertaking to deliver the object it is attached to, and a miniature billboard, usually amplifying the national myth of whatever member-country of the Universal Po

At the Stampex exhibition there were millions of such tiny pieces of paper on display, a century and a half of stamps. And thousands of punters pining for them. These punters were, to a man, men. And most of them white men, about fifty years of age. The stamps, many of them, were a good deal older.

Ah, those stamps! How they bring back the multifarious antique pleasures of philately: the folding of stamp hinges, the taste of gum arabic on the tongue, the touch of plastic tweezers, the thrill of the watermark detector, the excitement of identifying the plate number, say, of a penny black, the world’s first adhesive postage stamp, and looking up the catalogue price. And the sense of amazement at triangular and octagonal and circular stamps from Tonga or Bhutan or some other mysteriously distant country—and at stamps of outrageous size, like the Cuban airmail stamp “Genocidio en Vietnam”, a monster three inches tall that featured B52s raining bombs with US air force markings on Vietnamese villages.

It’s to philately that I owe my earliest lessons, not only in geography but also in aesthetics and politics. Not to mention cupidity. Stamp collecting really is an education. It’s a shame to see how far from popular the whole business is today.

From definitives to commemoratives

Is there any hope? Could Freddie Mercury’s stamp collection, currently on display at the National Postal Museum, bring philately back into fashion? The late lead singer of Queen took up the pastime during his childhood in Zanzibar, where British postage stamps doubtless seemed as exotic to him as Tanzanian stamps did to me a decade later. Yet it’s hard to see Queen fans following suit today.

Then there’s Thomas Pynchon’s cult novel The Crying of Lot 49. The book has a labyrinthine plot that is dominated by postage stamps and postal services (notably the nineteenth century Thurn and Taxis post, the successor to the Reichspost of the Holy Roman Empire). But the global success of Thomas Pynchon’s novels has not kindled a campus stamp collecting craze. If someone were to write a novel called Stamp Collecting, it would no doubt turn out, like Trainspotting, to be about something else entirely.

British definitive stamps—the elegantly minimalist design with the Queen’s head in cameo that we see each day in the UK (each day, that is, when the post comes)—are a triumph of branding, of the assertion of corporate identity. They are simple but instantly recognisable. The cameo style of the Queen’s head echoes the head of Queen Victoria that appeared on the penny black in 1840.

A design consultant charged with spinning the image of a multinational corporation might envy the degree of continuity in this elegant and unmistakeable miniature advertisement for UK Ltd. The elegance is enhanced by the absence of words. By convention—I guess because a Briton invented them—there are no words at all on current British definitive stamps. Just a numeral, chaste and solitary. A silent monarch rules serene. It’s as though the last decade, with all its humiliations for the royal family, had never happened.

British commemoratives, or “special stamps” as the Post Office now calls them, are another remarkable achievement in graphic design. Some credit for this belongs to Tony Benn, who launched the first of a tide of new stamps when he was Postmaster-General in the 1964-66 Labour government. Since that time there have been hundreds of new designs for British stamps, made for collectors and bought as small investments. Indeed, philately is not really a hobby anymore. Today’s stamp-collectors are more like curators. They are custodians, not only of the childhood pleasures of people like myself, but of a global treasury of graphic design, cultural politics and nationalist mythology. At its best, the postage stamp is an extraordinary design achievement, a rare art of miniature, like a Moghul painting or an Elizabethan court portrait, one that should be more widely recognised, and one whose small compass should not obscure its wider significance, nor its intricate delights.  ✭

It took a couple of decades, and the advent of Instagram, but stamp-collecting did, finally, come back into fashion. See Post modern: why millennials have fallen in love with stamp collecting.