Princess Diana, Jack Straw
and the knock on my door at midnight

Give alms to the first person who asks each day

Give alms to the first person who asks each day

The knock on the door comes at half past midnight. Then there is an insistent ringing on my front door bell. Is it a friend in distress? A neighbour who has lost their key? The police? A drunk? A door-to-door salesman? Proselytizing Jehovah’s Witnesses?

Probably neither of the last two—this is what I’m thinking as I make my way downstairs—not at this time of night.  All I can see is the glow of a cigarette in the dark through the spy hole in the front door. Definitely not Jehovah’s Witnesses, then. Nor the police.

When I open the door there’s a young woman I have never seen before standing on the threshold, hair in her eyes, smoke on her breath. The first thing she says is: 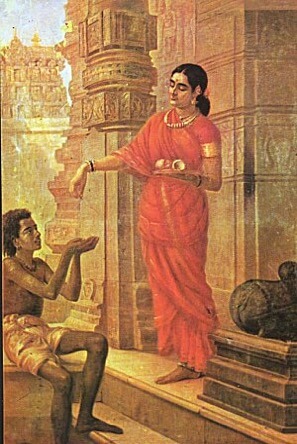 “Lady Giving Alms at the Temple” by Rja Ravi Jama

Perhaps you are a good Samaritan, more spontaneously generous and less circumspect than I am. In these circumstances you might say “Of course. Now would you like a cup of tea? Is there anything else I can do to help?”

Or perhaps you are tougher-minded—or harder-hearted—and could find it in yourself to say “no” and close the door. Or maybe you are elderly and vulnerable, or of a nervous disposition, and wouldn’t answer the door in the first place, especially not at that time of night.

Most likely, though, like me, you would find yourself maintaining a solicitous demeanour while running silently through a list of possible deceptions and known tricks of con-artists, and consulting your better self—and your worse self—for advice on what to do.

Her name, she says, is Yvonne. She’s just come back from Birmingham and there’s no electricity in her flat. She needs money to charge the power key. It’s cold and dark. The baby is crying and she can’t heat the milk for its bottle. She lives in that block of flats over there. She doesn’t know anyone. She only moved here three months ago. She lives on £83 a week. The baby’s not a year old yet; and she thinks there’s another one on the way.

As I talk to her I am interrogating myself. Is this story for real or is it a ruse to gain entrance to my house and case the joint so that—for the sake of argument—her accomplice round the corner can ransack it later? Or now? Or is she a crack addict? And where’s the baby?

Yvonne, if that’s her real name, seems agitated and distracted, rather than distressed. Does she try this story on one householder after another, night after night? And whether or not it is true, is it my part to help her?

I am leaning to the view that she is not casing the joint; that she is just looking for money for drugs. But what do I know? I can’t say “Take me to your dealer, and I’ll give him the money myself” And nor do I feel able to say “I’m sorry, I don’t believe you. Please go away now.”

In my mind a dialogue starts up between two strains of thought, the Jack Straw tendency and the spirit of Princess Diana, the hard head and the bleeding heart. On the one hand the voice of the Home Secretary says that gullibility and random acts of kindness are no solution to social problems; on the other, the spirit of Diana says that a person standing at your door asking for help cannot be turned away.

Charity in this view—in the words of St Paul—is the bringer of light. The spirit of Diana notes that Ted Turner is giving a billion dollars to the United Nations, twenty cents worth of light for every person on earth, making him the greatest philanthropist in history. If Ted Turner can give a third of his wealth away like this, this strain of thought continues, surely you can afford a tenner.

But, says the Jack Straw faction, the person at my door is not the United Nations. And Ted Turner did not try to give everyone in the world twenty cents. You could spend that ten pounds more effectively in a systematic act of philanthropy designed to work towards the rehabilitation of drug casualties or the improvement of the lot of single parents.

By now, though, I know that the Jack Straw tendency is going to lose this one. I don’t suppose he has strangers knocking at his door at midnight. As for Ted Turner’s idea, I’ve worked as a consultant for the UN and I doubt very much that its own problems, let alone the world’s, can be solved by giving it cash. Better, probably, to help pay off the national debt of an individual country—if you are that rich—and let the rest of us give to individuals.

One o’clock in the morning with the light still on

Now it is getting on for one o’clock in the morning. I’ve heard that in India some people adopt the following principle: give what you can to the first supplicant of the day, direct, without intermediaries, person to person, patron to client. And then close your purse till the next day.

Yet some impulse prevents me giving Yvonne exactly what she asks for. So I give her five pounds in coins, thinking she should be happy with that. But she wants ten. She will pay me back, she says, when she gets her money from Social Services. She offers to write down her address. I say no. I say goodbye.

Forty minutes later the doorbell goes again. She is back. She can’t get more money anywhere, she says, so will I please give her the other five pounds.

I feel annoyed, and yet—why do I do this?—I give it to her.

Blame the spirit of Princess Diana. I’m really not an easy mark, believe me. I routinely ignore begging letters from charities. I walk past poor folk in Africa and India; I brush off the grasping hands of street children; I turn from the silent gaze and outstretched hands of legless mendicants, any of whom would be grateful for a hundredth of what I am giving the person now at my door, people who’d be glad to get twenty cents from Ted Turner, or from me. Their distress, their need, is just as immediate, just as direct and much greater than Yvonne’s.

So why do I give her this money? Is it because she is, or claims to be, my neighbour? Is it because it is my door she is standing at, not someone else’s? Because I know her name? Or because I feel more kin to her than I do to an African or an Asian in a famine zone?

It’s not really any of these things. It’s something else. It’s because I feel guilty that I don’t believe her story. And I don’t know why, but I am beginning to believe her now, though in the light of day I’m pretty sure my scepticism will return. I am worried she has left a baby alone for hours while she trawls the streets for money. And I’m too weary to check out her story. The Jack Straw in me says this is hopeless, irresponsible, that she is clearly incapable of taking care of her child, if she really has one, and that hand-outs are useless. But the voice of Princess Diana says the gift is the thing, the gift of hope, of light.

Yvonne goes off back to her baby, if her baby exists. I know I won’t see her or my money again. The last thing I do is ask her why it was my door she chose to knock on.

“It was because your light was on,” she says. ★