Report to Save The Children Fund

The SPLA are now the de facto rulers of large parts of Southern Sudan, but the situation there is still unstable. Food has become an important weapon in the civil war. Because the SPLA control access to the rural areas the current relief effort has so far favoured them. Thanks to continuing operations by ICRC.and Unicef/WFP, famine has been averted—or at least postponed—in Bahr al-Ghazal and Eastern Equatoria. But in parts of Upper Nile the situation is still serious. All relief operations are liable to be curtailed by the rains and, in the case of that organized by the UN, by the expiry of their agreement with the Khartoum government and the SPLA. 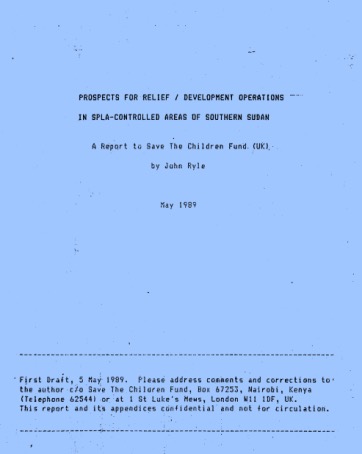 A number of NGOs have recently started projects in SPLA-controlled areas, predominantly in the health field. They will face problems in the coming months due to the rains and the probable termination of UN emergency programme, which has provided logistical and material support.

During the rains, from now until November, when food delivery to SPLA areas becomes difficult, the SPLA are liable to subordinate the relief. effort to military considerations.

SPLA hegemony has permitted the reestablishment of normal agricultural activity in some areas of the south, despite the lack, in most places, of inputs of seeds and tools. But because of the loss of last year’s crop, from floods or military activity, the normal seasonal hardship of the mid-year hunger gap is likely to be exacerbated, except in those areas where ICRC or WFP have been able to stockpile food.

The biggest emergency in the south will continue to be Juba, where a large population is completely dependent on relief supplies. There may be an SPLA onslaught on Juba at any time. In such an event, although the relief operation could continue under SPLA auspices, some of the inhabitants of the town are likely to flee, either into SPLA-controlled areas—if there is food there —or towards the government-controlled zone in the West, or southwards to Uganda. An SPLA blockade of relief supplies would have a similar effect.

A crucial issue for agencies operating in SPLA areas is the expanding role of the SRRA, the SPLA’s relief wing. The SRRA aspires to be an  implementing agency, an indigenous NGO; it also acts as a department of the SPLA civilian administration, subordinate to the military command. Whatever happens—whether the SPLA wins an outright victory in the south or makes a peace agreement with the Khartoum government, or whether there is a stalemate—the SRRA seems likely to play a central role in dealings with relief and development agencies. If SCF wishes to assist the Southern Sudanese population it must pursue a realistic policy of cooperation with the SRRA, starting without delay.