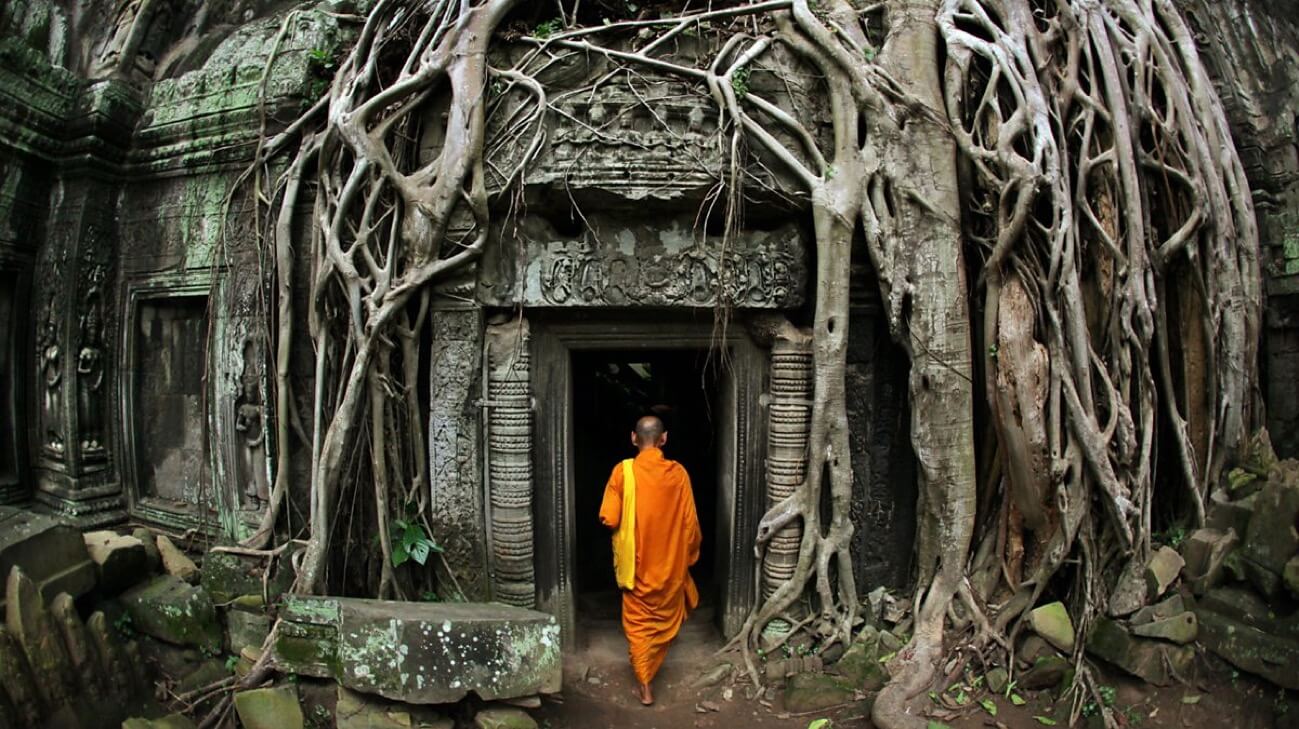 It’s back in 1993 and I’m seeing Angkor for the first time—gazing down from the porthole of a Russian military helicopter at the huge, geometrically ordered capital of the mediaeval Khmer empire, now the archetypal jungle city, ruin of ruins.

It’s the half-way point in the eighteen-month period that Cambodians will come to refer to as the UNTAC Time. The United Nations Transitional Authority is a multinational force of soldiers, policemen and bureaucrats, charged with supervising an uneasy truce between the Khmer Rouge and the Vietnamese-backed army that drove it from power. The Khmer Rouge, whose homicidal rule decimated the Cambodian population in the 1970s, used the Angkor temples as munition dumps. In some—an unknown number—they hid landmines amid the sculpted masonry and monumental statuary.

The helicopter approaches Angkor from the West, coming in low over dense forest: below us are the shining moats and reservoirs of the ancient capital, and sandstone towers taller than the trees. The UNTAC soldiers in the helicopter, Bangladeshis and Australians, lean out into the warm wind to gaze at the spectacle: Lost Horizon meets Apocalypse Now. Even the crew, who fly the same route every day, are diverted by the effect of light: the brightness on the water, the long shadows on the stones.

Everyone is astounded by Angkor. It is a place no photograph can prepare you for. The world’s first megacity, the size of Los Angeles: so vast, so strange, so perfectly concealed. The French archaeological administrators of the colonial era ordained that the surrounding forest should be preserved to retain the frisson of exploration, the temple-of-doom effect. Some sites were cleared and the monuments restored or rebuilt, but others were deliberately left as they were found, the haunt of gibbons and macaques, their walls and towers and serpentine carvings tangled up in the colossal roots of strangler figs and kapok trees. A curator of the time referred to himself as “stage manager of a vegetal orgy”. 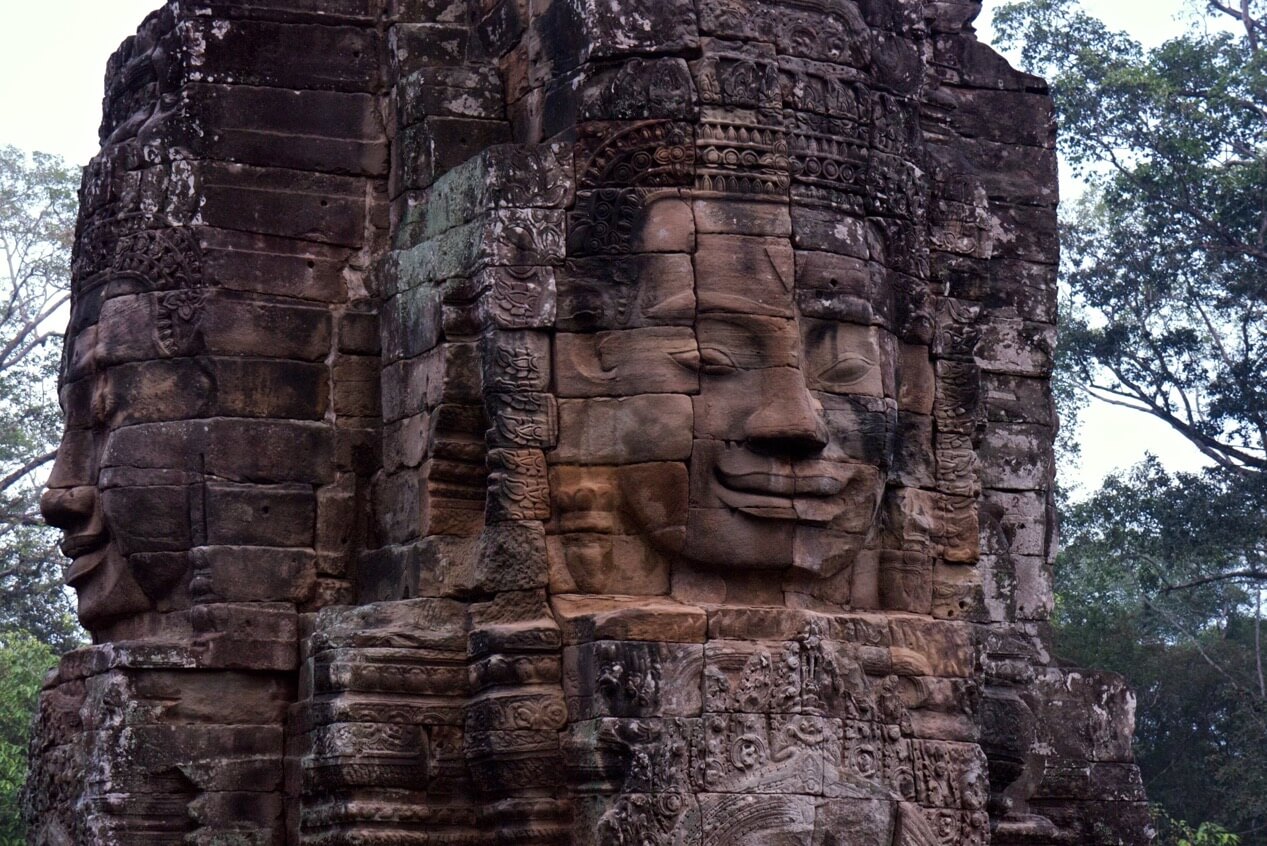 Back then tourists could visit the ruins riding on elephants—the regulations specified a maximum of two in the palanquin—and the wonders of Angkor became a recurrent motif in travel books by exquisites such as Sacheverell Sitwell, Pierre Loti and André Malraux. Malraux, a connoisseur of oriental art, went further: he spirited away a couple of sandstone bas-reliefs from the temple of Banteay Srei. Caught and arrested in Phnom Penh, this brazen littérateur somehow managed to represent the episode as a protest against colonialism. Later he was to become De Gaulle’s Minister of Culture.

From the 1970s onwards civil war kept the monuments off the tourist map. But all the warring parties in Cambodia invoked Angkor Wat, the most spectacular of the temples, as a symbol of nationhood. A silhouette of its corncob towers featured on both versions of the national flag, that of the recognised government and that of the Khmer Rouge. And the monuments themselves, despite fears to the contrary, survived the war intact. Not so the sculptures that adorned them. The Khmer Rouge followed André Malraux’s example: throughout the war uncounted numbers of Khmer carvings were smuggled to Thailand and sold.

In 1993, at the time of my first visit to Angkor, the war was hotting up again. The Khmer Rouge had just withdrawn from the peace process and returned to its strongholds on the Thai border; the traffic of stolen artefacts had resumed. Together with gem mining and logging—in collusion with Thai and Malaysian timber companies—art smuggling was bankrolling the Khmer Rouge, linking environmental destruction to the erosion of culture. 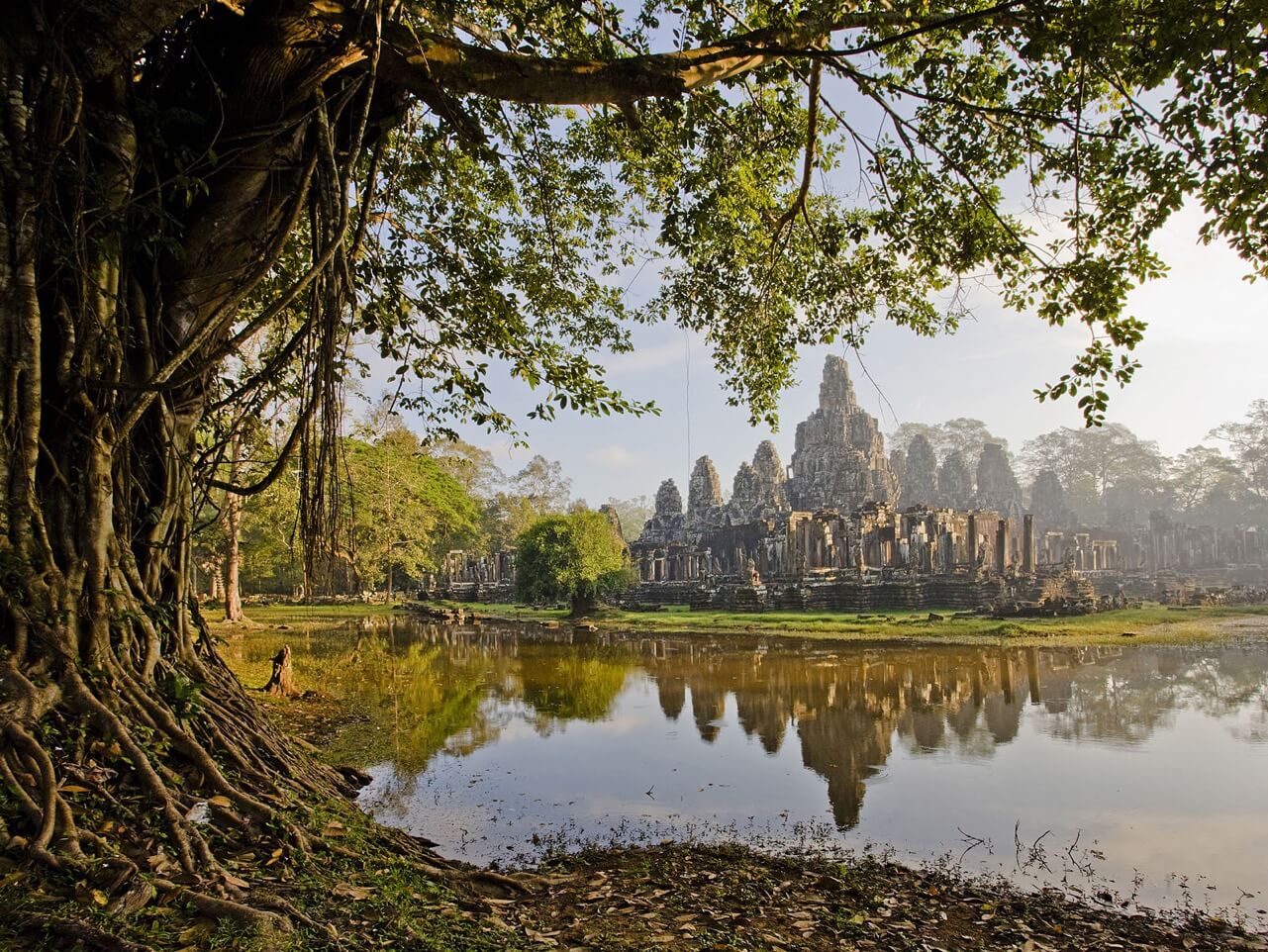 And now it’s 1996, three years on, and I am back in Angkor covering another story: landmines, the curse that lies on countries recovering from civil war—and those, like Cambodia, where the war is still not yet over. There are said to be more mines in Cambodia than there are Cambodians. Mines are the chief obstacle to a return to normal life, keeping farmers off their land, killing or maiming hundreds of civilians every month. The presence of mines also discourages tourism, an area of the economy which the new government is keen to expand.

In 1993, when I first came here, the temple of Banteay Srei was still off-limits. Restored after Malraux’s depradations, it is perhaps the most beautiful of the dozens of temples scattered round the ancient city. But it lies on a strategic route from the north, and it was known to have been mined. In 1994 the Khmer Rouge ambushed and killed one of the few tourists foolhardy enough to go there.

Finally—last week—I got the chance to visit Banteay Srei, as a guest of the French-led demining team in charge of clearing it. They had just completed the removal of more than a hundred anti-personnel mines from the temple enclosure. Mine-clearance in an ancient monument is a particularly delicate operation, as the mines can’t be destroyed in situ, but must be neutralized and removed elsewhere for demolition. I watched the deminers work on another site north of the temple. Red tape marked the safe lane, they went over every inch of ground with a metal detector. Any trace of metal had to be investigated in case it was a sign of a buried mine. When one was found it was excavated with exquisite care. Red stakes marked the places where mines had been unearthed, revealing the zig-zag pattern they had been laid in: originally this would have been to protect a military position, or deny passage to an enemy patrol, but now the mines lay in wait for some hapless villager gathering wood or water. The work of mine clearers is a life-or-death kind of excavation, a perilous archaeology of conflict.

The good news is that the temples of Angkor have all been cleared now. And last month the Cambodian government announced a US $20 million joint tourism venture with a Malaysian conglomerate, involving a hotel complex to be built on the same ground plan as the ancient city, a golf course and a nightly sound and light show. A Japanese company has proposed a mini-railway round the temples. At Angkor, it seems, it is Year Zero of mass tourism. This may not be pleasing to the connoisseur of ruins, for whom solitude and exclusivity are de rigueur, but it could be good news for the economy of Cambodia—that’s if the money stays in the country and not all of it in the hands of the few. If the profits were put into clearing mined agricultural land, then a tourist complex at Angkor would be a small price to pay. ★