Since the end of the seventeenth century, when the first chimpanzee was shipped from Africa, apes have served to define the limits of the human in European thought. They are the measure of the distance we keep from the rest of nature. The appearance of these formerly mythical creatures was the occasion of intense speculation on the part of Enlightenment thinkers—as if a yeti, say, or a Sasquatch man, or Australopithecus, were to turn up alive today.

The eighteenth-century Scottish philosopher Lord Monboddo considered the orang-utan—a term then used for the chimpanzee—to be proto-human, an example of man in the state of nature, as he had been before the acquisition of language. In France Jean-Jacques Rousseau took up this idea enthusiastically. (Neither had ever seen one.) But most of Rousseau’s and Monboddo’s contemporaries believed that apes were, if anything, degenerate versions of mankind, beyond the pale of the human.

Thus Monboddo was widely mocked. “Other people have strange notions,” wrote Dr Johnson of his contemporary, “but they conceal them.” The satirist Thomas Love 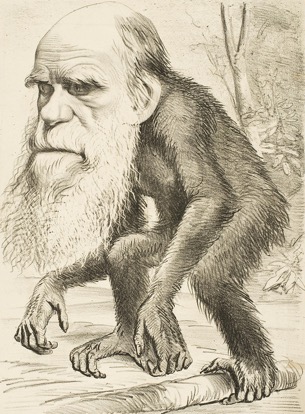 Peacock lampooned Monboddo in Melincourt, a novel in which a mysterious bearded arriviste, Sir Oran Haut-ton, becomes a member of parliament and eventually Prime Minister, his taciturn manner being taken as the sign of
exemplary gravity and discernment.

Yet Monboddo’s inkling of hominid evolution turned out to be broadly correct. He was also right, as Stephen Clark points out in his contribution to The Great Ape Project, to think that it is not necessary to speak to be human. Infants cannot speak, nor can seriously mentally impaired people, yet no one doubts they are of our kind. And Monboddo may also have been right, to an extent, in thinking that apes were capable of mastering language. When, in the present century, primate researchers finally managed to teach apes to talk it was in sign language, the language of the deaf. But no one doubts that deaf people are human either.

After The Origin of Species

In the first half of the eighteenth century the thitherto fluid speculation of Enlightenment thought congealed into an elaborate hierarchy of race and species, a vision of a fixed order of nature, divinely ordained, that sustained European imperial expansion. Then in 1859 the publication of The Origin of Species unveiled Darwin’s revolutionary theory of the relation between living things, a relation that implied a common ancestry for men and apes—or rather, to use more accurate terminology, both being part of the same genus, for men and other apes. Darwinism marks the victory of scientific taxonomy: at the same time as it stresses the historical continuity between species, it fixes the genetic distance between the other apes and us.

But not the ethical distance. We are still in the process of coming to terms with the moral implications of Darwin’s revelation. The Great Ape Project is the most recent result of this: a proposal by a group of biologists, anthropologists, psychologists and philosophers, many of them distinguished figures in their disciplines, that the other great apes be “included in the community of equals”—that human rights should be extended to the gorilla, the orang-utan and the two species of chimpanzee, that these creatures, like human beings, should not be killed, nor be subject to the deliberate infliction of pain, nor to arbitary detention—and that great apes in captivity in zoos and laboratories should therefore be returned to forest reserves and “independent territories” established for them in their original habitat.
It is a startling proposal, going beyond the demands even of many animal liberationists (though its sponsors include two of the founding fathers of the animal liberation movement). Putting it into effect would involve giving apes the same legal rights as children and mentally impaired adults. In legal terms, instead of being property, as other animals are (at least potentially), apes would be persons. Since they could not represent themselves, at least not in a way that would conform to human ethical and legal notions (no non-human apes have yet been taught to read) we, humans, would be their guardians.

The authors argue, variously, that the extension of such rights to some non-human primates is a logical continuation of the historical widening of moral concern to include other races, the same concern that abolished slavery and established the universal declaration of human rights. They argue that primate research over the last few decades shows there is no significant criterion of personhood that apes cannot fulfil, and that the moral boundary we currently draw between us and them is therefore indefensible.

Objections to such a proposal come from several directions. What would the obligations, as opposed to the rights, of a non-human person be? Would they be enjoined not to kill or torture each other–or other animals–or us? As a result of the observations of primatologists we know that chimps, for instance, are capable of extreme violence to their own kind. This may well reinforce the view that they are rather similar to us, but how could the reconstituted sylvan communities of great apes that are envisaged in the current proposal be policed in order to prevent murder, or simicide? There is a touch of Brave New World about such a notion.

Another important question is: why stop at apes? Once you jump the species barrier why not include all primates? Or all mammals? Or all animals with central nervous systems? All sentient beings? Our tenderness towards specific kinds of animal tends to increase as they become rare. The number of great apes is small, thanks largely to human depredation. So the practical difficulties of implementing their new status would not be insurmountable. 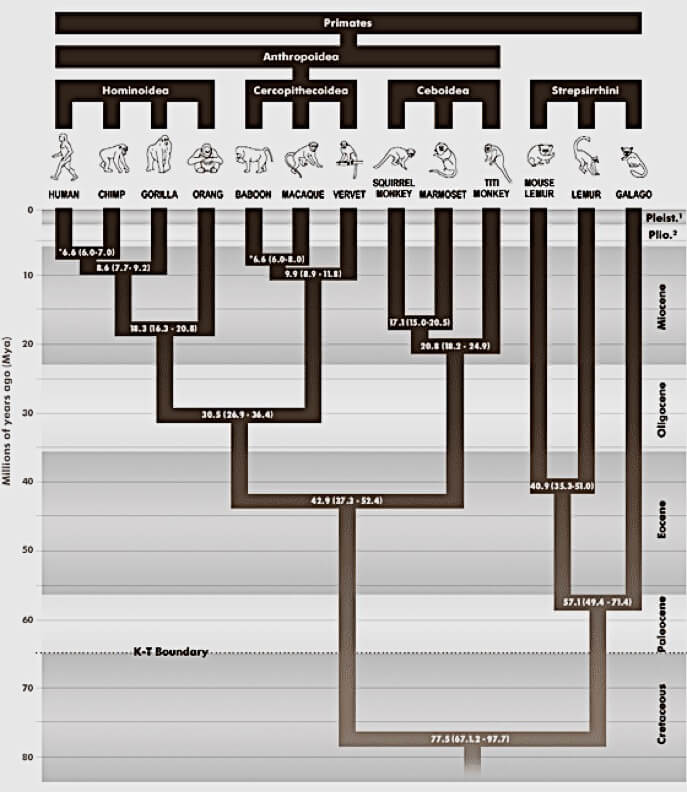 But some of the contributors to the book see the ape project as the first stage of an extension of rights to a much greater range of sentient beings. This would be a truly radical proposal. Extending the demand for such rights and protection still further into the domain of the non-human would strain not just the moral imagination, but the purse-strings of the world. This may be why the authors of the book have–rather arbitrarily–excluded the two other ape species, gibbons and siamangs, species which are, as yet, more numerous than the big three.

In which case, an objector might say, why not stop at the obvious point, the point we have already reached if we subscribe to western liberal doctrine, where the limits of the species are also the limits of reciprocal moral expectation? We can, after all, be kind to animals without needing to believe that they are of our kind. We can hold radical opinions–about laboratory experimentation, for instance, or factory farming, or eating meat–while still maintaining that human beings are significantly different. Indeed it may be exactly because we maintain the importance of this difference that we consider that we have special obligations to our fellow animals. Sagesse oblige.

The answer is that, in the case of apes, the point of differentiation is not obvious. The difference between us and other apes is, in terms of genetic history, circumstantial. It’s only a few thousand generations ago that the ur-man merges with the ur-chimp (if you accept the current account of hominid evolution). A mere two hundred thousand generations—a flash in evolutionary time—and all of us apes are one.

And intermediate species are possible. Non-human apes can hybridize with each other, as lions can with tigers, though it doesn’t happen very often in either case. So it’s not entirely impossible that a human could produce offspring with another species of ape. Nor is it impossible that a relict of some intermediate species, Australopithecus, say, could still turn up. Were that to happen, Richard Dawkins argues here, the existing basis of common values would be threatened, racism would blur with speciesism.

This is perilous ground, where the extension of concern into the non-human realm begins to threaten the liberal consensus on the uniformity of human nature. Stephen Clark, taking up Dawkins’ point, argues that the fragile taxonomic unity of the human species will not bear much weight when it comes to asserting a moral difference between us and our fellow apes. He proposes, instead, a greater humankind corresponding to the superfamily Hominoidea. This is an important argument, subtly proposed, and it would be interesting to see the implications explored more fully.

All these arguments take place within an unquestioned Darwinist paradigm. The contributors to The Great Ape Project write from the perspective of the great edifice of the western scientific enterprise. And none of them hail from places where great apes exist in the wild. There is only the most fleeting consideration of non-European strains of thought. In Buddhist eschatology, for example, the notion of reincarnation puts humans in a metaphysical relation to other animals quite different from that posited by western materialist evolutionary orthodoxy. It is not necessary to believe in reincarnation to see that, as an idea, it constitutes a powerful metaphor for the interdependence of species (though this may not do anything to advance their well-being).

It seems inappropriate that a challenge to anthropocentricity such as posed in The Great Ape Project should allow itself to be vulnerable to a counter-charge of ethnocentricity. And it adds to the slightly fantastical air of the whole project. This is a campaigning book, but it is also part of a highly esoteric academic discourse. Clearly it is likely to be some time before the message presented here reaches most of the inhabitants of Congo or Sumatra. In order not to further hinder its passage from the west to the rest of the world it would be well to acknowledge that Congolese and Sumatran people exist, and that they do so in closer proximity to non-human primates than westerners do.

All the same, this is an important book. It dramatically extends the debate about animal rights, making it central to ethics. Apes once again become, as for Lord Monboddo and other Enlightenment thinkers, the subject of radical moral speculation. Such speculation contributes to the urgent debate about the pathological increase in human population and our corresponding abuse of natural resources, issues that affect the well-being of our fellow creatures and ourselves. Respect for the great apes is symbolically significant: it involves recognition not just of our common ancestry, but of the principle of continuity that links us to other living beings. And it is the neglect of this principle that has put us all in peril. ★

Twenty-five years after his death, Emperor Haile Selassie is laid to rest in Addis Ababa....