On the train a man with a long beard is reading Proust. And as he reads he is chewing gum. His long beard trembles a little. Tiny wafts of spearmint from his side of the aisle spirit me back to the beech woods of Sussex, to childhood afternoons spent crashing through the bushes on the slopes of the South Downs, stomping wild mint in the undergrowth, enveloped by the smell of it, a formative experience that doubtless helps explain later cravings for polo mints and mojitos.

Other passengers in the train are not so moved. The gum-chewer’s immediate neighbour is irritated enough to change her seat, muttering something about the need for “No Chewing” signs on the carriage windows. The offending party remains oblivious to her distaste. He is ruminative, distracted, lost in a readerly trance, jaws moving slackly, mouth agape, eyes and hand roving over the opening section of Swann’s Way, the passage where Proust’s narrator is thrown into a transport of 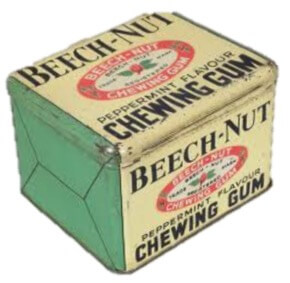 memory by the scent of hawthorn blossom on the altar of the church at Combray.

And I am recollecting my induction into gum-chewing at the hands of my more worldly cousins, when we ran wild as children in the Sussex beechwoods. They were the founding members of the highly secretive Chewing Gum Club (how I longed to join); their habit was to hide their supplies—and leave the residue—on the roof of our grandmother’s garden shed.

Our grandmother was a disciplinarian from South Africa. She regarded chewing gum with a degree of distaste that seemed excessive to us. For her it was an alien, American habit, to be discouraged along with comic books and blue jeans, lest we grow up slovenly and uncultured. The rubbery strips with their chevron patterns would have been better used, in her view, for mending bicycle tyres (this wouldn’t have worked, of course), so that we could go out and get some exercise. Also, she stressed, the roof of the shed wasn’t strong enough to bear our increasing weight. The Chewing Gum Club was banned, then reconstituted again. Each summer holiday, for a while.

The things we do with our mouths

Childhood or adolescence is the time for chewing gum. If adults chew anything it should be tobacco. There’s something embarrassing about the sight of a gum-chewing adult. Proust would certainly not have approved. Yet I chew gum myself from time to time, I confess. (Any flavour as long as it’s spearmint). But not in public—no fellow passenger need wrinkle their nose at me—only at my desk, as an aid to concentration. Perhaps it’s for this reason that my mind wanders when watching another person chewing on the train.

Our mouth parts are the busiest parts of our anatomy outside the eyes and brain, constantly on the look-out for diversion. We talk too much; we worry about oral hygiene; we yearn to kiss, and be kissed. Given the questionable things we are tempted to do with our mouths—smoking, overeating, bearing false 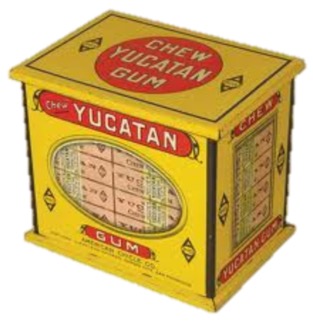 witness—gum-chewing can surely be seen for what it is, a harmless vice, one that may save us from worse.

But this is also why it’s embarrassing. Chewing gum is a substitute for something else, for food, for the breast, for sucking the thumb, biting the nails, cleaning the teeth or—laced with nicotine—for tobacco. Orally-inclined cultures—not just ours—have many ways of displacing and socializing such impulses. In India the sidewalks are red with the expectorations of betel nut chewers. In Somalia, during the US invasion, gum-chewing American GIs came face-to-face with Somali militiamen who had their own chewing habit—the coca-like stimulant leaf, qat.

In other cultures—this would be more to my grandmother’s liking—chewing is not the done thing. After the Gulf War surplus US army field rations were air-dropped onto Iraqi Kurdistan. (I ate some. A tip of the hat to the government and people of the United States—or the people of the US anyway—for this kindness.) Each of these MREs—meals-ready-to-eat—contained an array of plastic sachets containing passable versions of chicken gumbo, hash browns or chocolate chip cookies. Finally, in each MRE package, there would be a single pack of chiclets, the hard candy-covered version of gum that is popular in the US.

There was some discussion among the fleeing Kurds as to what these little oblong white things were. Were they a drug, one of them asked me, that strengthened the American soldiers in battle?  Or a slow-burning explosive to heat the food? Or a firelighter? Or were they actually food to be eaten? They tasted sweet—so were they a kind of sugar? Might they be poison? Many of the puzzled recipients of this American largesse ended up throwing the chiclets away.

Where chewing gum is a crime

The best-known case of a chewing-gum averse culture, an anti-America, so to speak, is Singapore, the tiny, exceedingly tidy, city-state where hardly anything is allowed (though I think they let you read Proust). Chewing-gum is one of the many things that are banned in Singapore, which suggests that there must be something good about the stuff. The Singapore gum ban was intensified recently with the announcement of absurdly draconian punishments for attempted import. At a press conference to publicise the new law a government spokesman announced that the penalty for smuggling gum into the country would thenceforth be a $6,000 fine and a year in prison.

One cannot but be struck by the inauspicious name of the Singapore government’s representative on this issue. Of course we should not be chauvinistic, nor anglocentric, about such things. We shouldn’t laugh. We’re all foreigners somewhere. But let it be noted, for the record, that the name of Singapore’s spokesperson on the anti-chewing gum campaign, as reported in the Straits Times, is Ms Chew. ★