Fifty years ago, at a symposium of anthropologists in Chicago, a new consensus emerged on the mode of production of hunting and gathering peoples. Their lives, the researchers agreed, were not—as they had frequently been represented—nasty, brutish and short, endlessly vulnerable to hunger and want. On the contrary, hunter-gatherers enjoyed, or had done until recent times, a varied diet that provided a more than adequate calorific intake, if a fluctuating one, and a 20-hour working week that left ample time for leisure and sleep. This had been achieved, furthermore, without the development of social hierarchies or exploitative gender relations, and without environmental destruction. In the Kalahari Desert, in east Africa, in Australasia, even in Siberia, hunter-gathering produced a quality of life that, in many respects, was the aspiration of denizens of the industrial world. 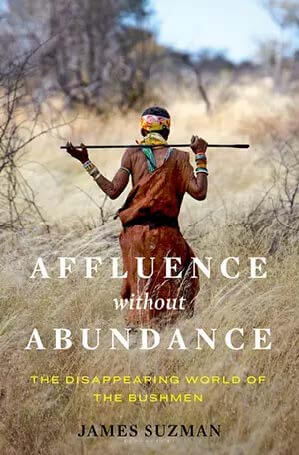 Stone Age Economics (1972), a book by the anthropologist Marshall Sahlins, one of the participants in the Chicago symposium, established this as the orthodoxy for a generation. He described hunter-gatherers as the “original affluent society”. They had taken, Sahlins argued, a different route to wellbeing: living for the day, not accumulating surpluses, desiring little instead of producing much. Subsequent archaeological finds and technical advances in the extraction of genetic and other data confirmed this picture of the good life before the triumph of agriculture.

Admiration of the hunter-gatherer way of life has become so fashionable—with “paleo” diets, “paleo” clothing and so forth—that a measure of scepticism is called for. Yet the idea of the stability and sustainability of the hunter-gatherer mode of production is supported, as James Suzman explains in Affluence Without Abundance, both by the archaeological remains of the foraging societies of the past and by observation of those that exist in the present. The Pleistocene period—when hunting and gathering was the only mode of production—lasted about 2m years; while the era of agriculture — now increasingly referred to as the Anthropocene — has endured just 100th of that time, beginning 12,000 years before the present. Archaeological evidence suggests that the first few millennia of the agricultural revolution were accompanied by a decline in human height and nutritional levels and an increase in death from disease, often passed to human populations by domestic animals. The agricultural mode of production prevailed, of course, and the human species burgeoned, but for most of the people in the world, for most of the time, their quality of life did not improve. And the cost to creatures other than humans has been far greater. For those of us who live in the lucky countries of the world, industrial civilisation—born of agriculture just nine or 10 generations ago—could be said to have brought a new set of benefits, but there are new costs too. We do not yet know if the game is worth the candle. Or how fast the candle burns.

Affluence Without Abundance is an elegant and absorbing contribution to our knowledge of the hunting and gathering way of life, both in the present and in the recent past. Its author is an anthropologist with long research experience in the Kalahari among Khoisan-speaking peoples, one of the few traditional hunter-gatherer groups that have not yet succumbed entirely to invasion and dispossession by more powerful neighbours.

Industrial civilisation—born of agriculture just nine or ten generations ago—could be said to have brought a new set of benefits, but there are new costs too. We do not yet know if the game is worth the candle. Or how fast the candle burns.

The Khoisan — who include the Bushmen, or San — are a genetically distinct population spread over areas that now form part of South Africa, Botswana, Angola, Lesotho, Zimbabwe and Namibia. Theirs is the most comprehensively documented of the world’s hunter-gatherer cultures. Suzman acknowledges this heritage of research handsomely. He describes, for example, the remarkable history of the Marshall family, doyens of field research among the Bushmen for much of the second half of the 20th century. Laurence Marshall was an American industrialist, a founder of the Raytheon company that developed the microwave oven (and is now a major armaments manufacturer). After stepping down from his role in the business, he devoted his fortune and the next 10 years of his life to a long-term family project documenting the life of Khoisan peoples and advocating for their protection. Marshall’s wife Lorna became a field anthropologist of repute; their son John made documentary films about the Kalahari and its inhabitants. And their daughter Elizabeth Marshall Thomas wrote a masterpiece of popular ethnography, The Harmless People (1959). Other chroniclers of the Kalahari included Richard Lee, whose work formed the basis for Sahlins’ proclamation of the benefits of primitive affluence, and Sir Laurens van der Post, whose romanticised accounts of Bushman life—now discredited—first brought them popular recognition.

Suzman’s gift is to translate this heritage of field research and his own long acquaintance with the land and the people into a balanced narrative, one that combines an unblinkered view of the cultural attrition Khoisan peoples have suffered — and the sad straits most of them are now in—with an informed understanding of the elements of their world that endure, if only in the memories of the living. Early in the book we are introduced to his adoptive father in one of the communities where he worked, and to the last of the traditional hunters of the Kalahari. We meet herbalists and trackers and storytellers. The art of making arrow-poison is explained, and the technique of skinning an elephant. Suzman describes, in vivid detail, the spirit world of the Bushmen, and their relation to the animals in their domain. We hear the distinctive voices of those he has come to know—jokey and profound and scatological by turns. (The book includes a useful pronunciation guide to Khoisan click languages.)

The Khoisan peoples, as Suzman tells it, long ago mastered the art of making a living in their harsh environment, and maintained the tenor of their ways for 10,000 years and more. But while they stayed still, the rest of mankind was on the move. Bantu peoples — and later European colonists — arrived in Southern Africa, surrounding Bushman territory. As hunters, the Bushmen were dependent on access to an area large enough for sustainable offtake of game. They had no interest in trade or exchange with the wider world. They were forced into it. For a while the Khoisan were protected from the encroachment of farmers and pastoralists by the aridity of the Kalahari, but the advent of borehole technology meant that their land was progressively settled, first by white farmers in the South African parts of the Kalahari, then, in Botswana and Namibia, by cattle-keeping Bantu peoples.

Until recently the Bushmen lived amid abundance. Now, increasingly, they do not. Many Khoisan today live on hand-outs in shantytowns where alcohol instead of hunting provides their access to the spirit world. The advent of the cell phone has administered the coup de grâce, leapfrogging earlier technologies, undermining local knowledge and distracting young people with the dreams of the internet — as addictive as alcohol, and cheaper.

The story Suzman tells is complex, addressing the divergent fates of several Khoisan-speaking groups over a long period of time. He tells it with aplomb. Affluence Without Abundance is a book in the high tradition of anthropological writing: rich with ethnographic detail, stylish, perceptive, compassionate and, ultimately, tragic.

2004: The war in the west of Sudan is the outcome of a ruthless divide-and-rule...