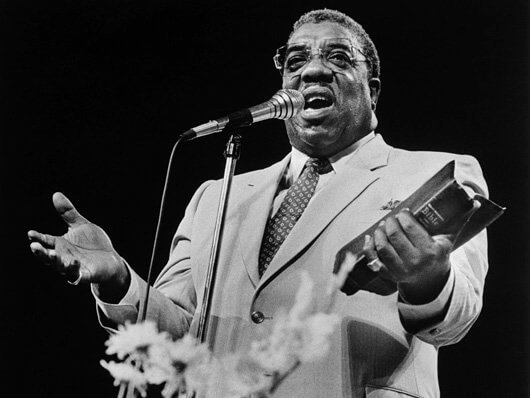 From Beverly Hills to Dalston with the Rev. James Cleveland

From Beverly Hills to Dalston with the Rev. James Cleveland

It’s Friday evening and the Reverend James Cleveland, leading light of gospel music in America for the past two decades, is gliding towards London from Heathrow in the back of an air-conditioned Mercedes, on his way to rehearse with the London Community Gospel Choir. The two acts, American and British, are performing together the following day at the Albert Hall. There’s single rehearsal before the show, due to take place in an hour’s time in a small, bare Methodist church in Dalston, in London’s East End, where most of the 90-odd members of the choir live.

“How much further?” asks Reverend Cleveland as we descend from the M40 into West London.

His own church back home—the Cornerstone Institutional Baptist Church—is in the heart of Beverly Hills. In keeping with the showbiz style of the new generation of American gospel stars, he makes no bones about his material wealth. Diamond rings glitter on his fingers, Liberace-style. His wardrobe is said to contain a hundred suits, fifty pairs of shoes, a plethora of fur coats. Today, though, his eye seems to be more distracted by the cars, by the other Mercedes, and the Bentleys and BMWs that cruise alongside us.

James Cleveland is a big man with a warm, growling, bass voice, which he uses to effect against the soaring tenors and sopranos of his Southern California Community Choir. As we move through Notting Hill he settles back in the leather seat of the limousine to discuss the new style that he and others have brought to the gospel heritage.

“In the United States,” he explains, placing his hand on my knee for emphasis, “gospel music got so strong that the bounds of the church could not contain it.”

So how is it still different from secular music? I ask.

“Gospel may be successful,” he says. “It may be commercial. But it’s still God’s work. We use music like the Pied Piper to lead audiences to God. Where they won’t come to hear the preaching they come to hear us sing.”

“And while they’re there”— he gives a low, growling chuckle—“why, you sneak the message in on them.”

“And before you know it,” he concludes, “they’re saying ‘Hallelujah!’ ”

We’re driving through Knightsbridge now, past Harrods and Hyde Park. Cleveland pauses and turns to the driver.

“Uh, no. I’ve got one of those. I want a Rover. You know, they’re rare in the States, those kind of cars. I’ve never seen one there.”

Home-grown gospel and the Church of the Latter Day Rain

Meanwhile, on the other side of town, in Dalston, the Reverend Bazil Meade, 32 years old, ordained in the Pentecostal Church of the Latter Rain Outpouring Revival, director and founder of the three-year-old London Community Gospel Choir, is leading his singers in an upbeat rendition of the Hallelujah Chorus, while they wait for Rev Cleveland and his entourage to arrive. 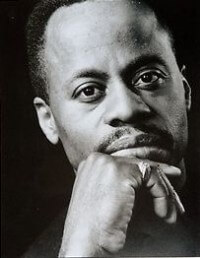 Bazil Meade has not met James Cleveland before. And he does not possess a Rolls-Royce, nor yet a Rover sedan, nor a hundred suits. A compact man with a broad smile, his style of dress is a T-shirt and track shoes. But he and his choir represent the closest equivalent in Britain to Cleveland’s gospel showmanship. They may yet turn out to be London’s answer to the Southern California Community Choir of Beverly Hills.

The members of the London choir, as I learned when I visited the church a few days earlier, are drawn from more than forty different Christian denominations, often in the teeth of opposition from pastors who see the choir as a threat to the vocal power of their own congregations. The choir members are young and racially diverse. In the last two years they have been an opening act for rock bands at Wembley and a backing group for recording sessions with Paul McCartney. Nevertheless—as Reverend Meade stressed when I spoke to him there—most of the members remain on the breadline.

As he and I are talking two members of the choir comfort a troubled stranger. There is laying on of hands followed by collective prayer. A young man testifies quietly to the help God has given him in finding a job. Over a third of the London Community Choir, says Rev Meade, are unemployed; for many of them it is hard to find even the five pounds they need for their annual subscription to the choir.

The godfather of gospel

James Cleveland’s car sweeps on along Piccadilly and through the city of London. He speaks of Elton John, who recently toured with Cleveland and his choir (“a very beautiful, very gracious man”) and the Rolling Stones (“Are they English?”). And he asks me about Jeffrey Daniel, the curiously coiffed, moon-walking American singer who presents the music programme 6.20 Soul Train on Britain’s Channel Four.

We are approaching Dalston now. Here, two centuries ago, the Wesley brothers wrote the hymns that form a good part of the contemporary gospel song book. I had been thinking the Reverend might be interested in this bit of gospel history. But his mind is elsewhere.

“Hey, what is it about this place?’ he says suddenly, looking out of the window at a group of West Indian youths hanging out on a corner.

“Those boys over there,” he says. “They’re smoking reefer. On the street…”

The car glides on and the young men move out of sight. The Reverend Cleveland returns to his earlier theme—the relation of gospel to secular music.

“Music is music,” he says. “It’s only the words that separate gospel from the rest. Just the words.”

Unlike other church-bred American performers—his pupil Aretha Franklin, say, or Billy Preston (who played in Cleveland’s band at the outset of his career)—Reverend Cleveland has never crossed the line that divides gospel from soul, its secular counterpart. According to Viv Broughton, gospel music columnist of The Voice and author of Black Gospel, Cleveland declines to perform in clubs. And he remains, despite half-a-dozen gold discs—and his preeminence in the gospel world—almost unknown to mainstream audiences.

In recent years, though, he has taken his ministry to Europe, and to the Far East and Israel. And in Britain recently the emergence of home-grown gospel from black Pentecostalist churches has produced a flutter of interest in local acts on the part of record companies. There is a new sense of belonging to a global gospel movement, one that links congregations from Seoul to Detroit. There was a sell-out concert at the Albert Hall last year, where the London Community Gospel Choir were the backing singers for Al Green, a soul artist who renounced secular music at the peak of his career and crossed back into gospel. These factors go to explain why Cleveland, who commands £20,000 and upwards for a performance, has chosen this moment for his debut here.

In Dalston, on my earlier visit, I asked members of the choir about Cleveland’s high-end lifestyle, wondering if they were aware of the rumours that swirl around him and other leading figures in the gospel church, where the sexual misdemeanours of pastors are often a point of discussion, as well as their wealth.

One of  the members of the Choir, a teenage soprano with a voice of silver, murmured, hesitantly, almost in a whisper, “Well, we do hear things about these American artists…”

Ah. Yes, it’s true. James Cleveland smokes. Cigarettes. They intensify, no doubt, his Louis Armstrong rasp. He doesn’t smoke in public, though, or in front of young people like those in the London Community Gospel Choir. When we arrive at the church, he steps out of the car and sets off towards the church. Then, halfway across the road, preparing for his entrance, he stops and turns round and gives his assistant his open pack of Salems to take back to the car.

Inside the church the choir is warming up with the Hallelujah chorus. Sharply-dressed black youngsters with lubricated hair are clapping and swaying in the pews; children are dancing in the aisles.

Bazil Meade welcomes his visitor. James Cleveland thanks him and the choir. The Lord is praised. The choir begins to sing from the Cleveland songbook, with the innovative arrangements, hypnotic repetitions and shattering crescendos that have brought him fame in the gospel world.

“Nobody told me the road would be easy,” they sing. “My problem will pass. The Lord will make it pass.”

Cleveland corrects their technique—first the sopranos, then the altos and tenors—using growls and semaphore.

“When you’re in the spirit.” he tells them, “it should be like fire—fire shut up in your bones.”

The rehearsal is over quickly. They sing just two numbers—once, twice. And then Reverend Cleveland is gone again, back to central London, to his hotel—or maybe a car showroom, to look at a Rover Sedan.

Back in Dalston the rehearsal winds down. The musicians know these songs by heart. Reverend Cleveland’s arrangements are the standard for gospel choirs all over the world, so there is barely any need for them to go through them all again. Tomorrow the audience at the Albert Hall will be able to judge how British gospel stands up to the original. In Dalston, for today, the playing and the singing is at an end; the London Community Gospel Choir is silent; its members are kneeling now, wrapped in prayer. ★