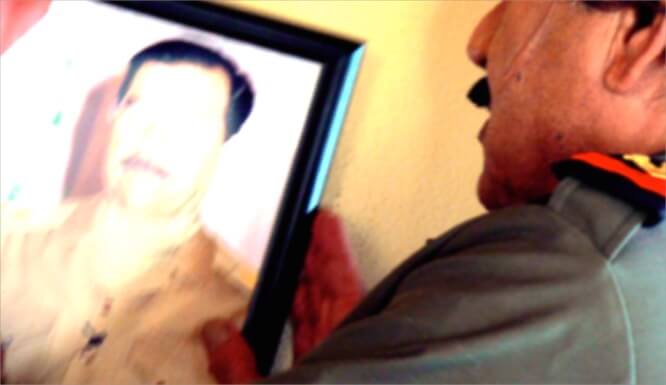 As the regime of Saddam Hussein and his son Uday approaches—hopefully—its final days, spare a thought for Fawaz-al-Emari.

He is—or is said to be—the dictator’s double, a post he’s held since 1984, the year that the previous stand-in was assassinated. With his face apparently remodeled by plastic surgeons in Yugoslavia and vocal chords doctored by Russians in Baghdad, Fawaz appears in Saddam’s stead whenever there is a possibility of danger. The face in the motorcade is that of Fawaz; it is he who takes the salute on the parade ground. When Saddam is photographed swimming in the Tigris it is Fawaz who takes the strokes. Apart from such occasions he is confined, perforce, like Saddam himself, to the presidential palace. Death awaits him if he ventures unguarded on the streets.

To be a dictator’s Doppelgänger is a strange fate. And Saddam, it seems, has a whole slew of them. We know this—if we can believe it—thanks to a man named Latif Yahia, who is lying low in London, and to Marie Colvin of the Sunday Times, who tracked him down there. Latif Yahia claims to be the former double of another member of Saddam Hussein’s family: his even more monstrous son, Uday.

The week before last in Baghdad, the real Uday gunned down one of his uncles, prompting the defection of his two brothers-in-law to Jordan—and perhaps the beginning of the end for the Ba’athist regime in Iraq. This will come none too soon for Latif Yahia, who was, by his own account, Uday’s stand-in for five years. He had the bad luck, he says, to have been at school with Uday and to bear him a passing likeness. In 1987, accordingly, he was, by his account, tortured until he agreed to become his school-mate’s double. His teeth were replaced; he had a cleft like Uday’s carved in his chin. Then, he says, he was forced to spend sixteen hours a day watching videos of the heir apparent, walking, dancing, driving, talking, drinking, and lighting cigarettes, until he could imitate him in all respects. Just as Saddam had his double impersonate him heroically swimming the Tigris, Uday sent his to the front to fight on his behalf in the Gulf War. It was Uday in person, though, says Latif Yahia, who collected the medals.

In an interview with the Sunday Times in January, while he was living in Vienna, Latif Yahia described how he fled Iraq in 1992 after falling out with Uday. He realised, he said, that in perfecting his impersonation he was beginning to adopt Uday’s vices as his own—he was drinking, smoking and beating his wife just as Uday did. And after what he claims were nine attempts on his life, he began to think he might not survive another. As he was escaping—again, he is the only source for this account of events—he was shot at by Uday himself but still managed to drive to the UN-protected safe haven in Kurdistan, impersonating his master one last time to get through the final Iraqi checkpoint.

Can all this be true? Latif Yahia is looking for a ghost-writer to help him write a book. It’s appropriate enough. Being a ghost is, in one sense, the writerly equivalent of being a double: intriguing, ethically dubious and professionally demeaning. Writers routinely embody other people’s voices—trying on personae is part of their work; but to surrender authorship the way a ghost-writer has to, putting your own voice in hock, is another matter. The French term for ghostwriter—nègre—with its weight of racial prejudice, encapsulates the shadowy, mutually exploitative nature of the relationship.

What might be a model for Latif Yahia’s book? The autobiography of the double is a sparse genre. I can think of only one―a second world war memoir called I Was Monty’s Double. Even Karl Miller’s recent Doubles, an extended meditation on the multiple self in modern literature, lacks any references to accounts by real-life doubles of their strange, paradoxically diminished lives.

In the realm of fiction there is Anthony Hope’s The Prisoner of Zenda and its sequel, Rupert of Henzau. These early twentieth-century changeling romances deal with an Englishman caught up in dynastic battles in central Europe by his chance resemblance to the Crown Prince of Ruritania. Ripping yarns though they are, such books can hardly be recommended to a man in Latif Yahia’s position, unless, of course his story is a fiction too. It would be like giving Terry Waite a copy of The Count of Monte Cristo, Alexandre Dumas’ prisoner-revenge epic.

The autobiography of the Dalai Lama might be more relevant. Being told that you are actually someone else while you are still a toddler—which is the experience of an incarnate lama—must be disconcerting. A reincarnate, though, becomes that person; he does not become their shadow, as a dictator’s double does.

There’s one another publication that might be of interest—both to Latif and to his future ghostwriter. (And to Fawaz al-Emari, should he ever escape from Baghdad). It’s an off-beat and rather suspect travel book called Biografi, by a New Zealand writer, Lloyd Jones. Biografi describes a search for the man who spent half his life as stand-in for Enver Hoxha, Albania’s answer to Saddam Hussein, an unfortunate by the name of Peter Shapallo. His is a story not unlike Latif Yahia’s.

Peter Shapallo, we are told, was a country dentist, born the same month as the Great Leader, and taken to Tirana sometime in the 1960s. According to Lloyd Jones’ account, he was billetted in the Presidential palace; his wife and two daughters were murdered; the surgeon who fixed his face was also killed; as were the tailor and hairdresser who perfected his transformation into the president’s double.

According to Jones, Shapallo spent decades thereafter impersonating Enver Hoxha. When the Great Leader sprained an ankle he limped; when he had a cold he sneezed.  He was instructed what to do if he was assassinated, what his last words should be. Then, when Hoxha died, Shapallo became destitute. He sought refuge in the German Embassy. Other Albanians thought he was a ghost. In a bathroom in the Embassy he attempted to disfigure himself, to reshape his nose, to make himself singular again. It left deep cuts on his face. Soon after Jones managed to track him down, he reports, Shapallo died.

And there’s the rub. How can you believe someone whose entire life has been dedicated to deception? How can you be sure they are who they say they are? Especially when everyone else in the story is dead too. And, in this case, when the protagonist himself is dead. You must not only trust the source of the story, but trust the teller too. And the teller’s interlocutor. And the translator.

It might be all lies. The books may be novels. Peter Shapallo, Fawaz al-Emari, Latif Yahia—all of them are unattested witnesses, highly unreliable narrators, to put it mildly.

And there are even darker possibilities. Marie Colvin, who wrote the story about Uday’s double, tells me she had sleepless nights before publication. Suppose, she found herself thinking—first jokingly then less so—it was not Latif she had interviewed at all but Uday himself, impersonating his own double in an elaborate bid to defect and go unpunished? Then—here we enter the realm of the fantastical—it is possible to imagine the double being tried and executed in error for the dictator’s son’s crimes. His claim to be a double is thought to be an extravagant ruse. Meanwhile the son himself escapes, claiming to be his own double. Then he has plastic surgery to make him look like someone else, unlike his old self, and goes off to a new life, with a new face. A story like this would be a inversion of the plot of Albert Camus’ novel L’Etranger, where the hero, out of existential sang-froid, commits a crime on behalf of his Doppelgänger and then surrenders to the consequences.

Uday and Saddam, though, are all too real. At the end of World War II the Nazi war criminal Albert Mengele fled to South America, where he changed his name and appearance. He lived quietly for three decades in Brazil and died a natural death. He was only identified—posthumously—by examination of his dental records. Technology has moved on now. Let’s hope that Western intelligence services, or the Iraqi opposition—or both—have Saddam Hussein’s fingerprints, and those of his sons, and their DNA profiles, somewhere securely on file, so that there can be no possibility of such an escape for them. ✭

In 2003, in the run-up to the second Iraq war, new attention was focused on Saddam Hussein’s alleged use of body doubles. By examining stock photos, a German forensic pathologist claimed to be able to discern that at least three different men had been assuming the role of Iraqi leader at public gatherings. The clones were apparently been told to remain silent when in role because Saddam Hussein has a speech impediment that is tricky to imitate.

Saddam Hussein and his sons were tracked down and executed or killed in the aftermath of the US invasion of Iraq. And their doubles, or purported doubles, if they existed, vanished.

There were further developments on the political celebrity impersonation front. In December 2000 Vladimiro Montesinos, head of intelligence in the government of disgraced Peruvian president Alberto Fujimori, went missing. He was reported to have fled Peru in a yacht and undergone facial reconstruction surgery in a clinic in Caracas, in Venezuela. It was said that he had registered at the clinic under a false name and left with the bill unpaid.

In Lima, the President of the Congressional committee charged with investigating Montesinos’ misdeeds told a newspaper “this rat will not be easy to catch.” Meanwhile the former President of Peru, Alberto Fujimori, who is of Japanese descent, sought refuge in Japan, where his features appear less distinctive.

In June 2001 Montesinos was arrested in Venezuela. But he had not, after all, had cosmetic surgery. He had merely grown a beard. The facial reconstruction surgery had been a rumour put about to confuse his pursuers.

The following February (2001) an ex-bodyguard of Fidel Castro, interviewed in a Chilean paper, La Tercera, explained how, after the arrest of former Chilean President General Augusto Pinochet in London in 1998, the Cuban leader, in his determination to avoid any risk of Pinochet’s fate, had recruited look-alikes to fool possible subpoena-servers during his foreign visits.

Of course, the Castro story may also prove to be an invention, put about on behalf of its subject, or perhaps by his enemies, or concocted for—or by—an ever-hungry press.