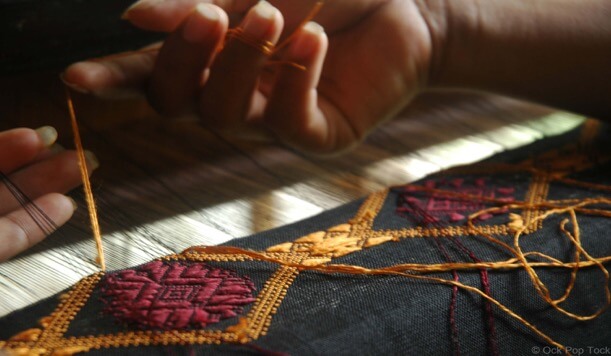 My forebears on my father’s father’s side were silk merchants in Macclesfield, in England. During the industrial revolution they pioneered the mechanized, factory-based process that displaced artisanal textile manufacture; later they exported the process to America, setting up the first new-world silk factories in Paterson, New Jersey.

My father’s mother, a century later, was part of a movement that looked back to pre-industrial weaving: she was a South-African born, art-school trained weaver who laboured at a wooden hand-loom in her home in Sussex. As a child I would sit beside her, watching the shuttle’s winding quest, the sweep of the comb as she built up the weft, thread by thread, colour by colour, lifting and wrapping and knotting .

Once, in search of dyestuffs, she took me lichen-gathering in the Scottish Highlands: the grey-green algal-fungal flakes, scraped off the rocks and boiled up, make a dye which, as I remember, is startlingly, paradoxically red. The duller the lichen, it seemed, the brighter the dye that can be made from it. By my grandmother’s day the arts and crafts movement had given a positive value to this artisanal style: hand-made was good again. And the days I spent sitting by her at the loom gave me a sense of this history, a glimpse of an earlier mode of production, kin-based, pre-industrial, pre-capitalist.

Spirits of the ancestors

The spirits of my weaving ancestors were surely with me when I visited Laos this past week. Still largely unindustrialized, Laos has one of the world’s richest traditions of textile manufacture. Laotian silk and cotton fabrics, unlike those of Thailand or Indonesia, are produced exclusively by hand, mainly by women (in the history of textile production, generally, when machines are introduced men take over). Dyeing, weaving and the grisly business of sericulture—the unwinding and respinning of the cocoon extruded by the silk moth larva—all take place at family level. Looms and spinning wheels are located beneath stilt houses. There, in covered trays, fastidious silk-worms chew on mulberry leaves. Mulberry leaves are the only thing that silk-worms will eat.

The textile historian Mary Connors explains that traditional Laotian weaving and silk-production suffered badly in the Indo-Chinese wars of the 1960s and 1970s. Royal patronage of weavers, which was responsible for some of the finest textiles produced, ended in 1975 when the Laotian monarchy was abolished after a Communist takeover. In her Lao Textiles and Tradition, Connors describes how routine family textile production was disrupted by large-scale migration to Thailand. Laos was closed to foreigners at that time, but in the 1980s Western dealers began to see antique Lao textiles appearing on the market in Thailand and elsewhere. Most of these were distress sales by refugees. Connoisseurs in search of novel acquisitions were made aware of what had been an unknown field. 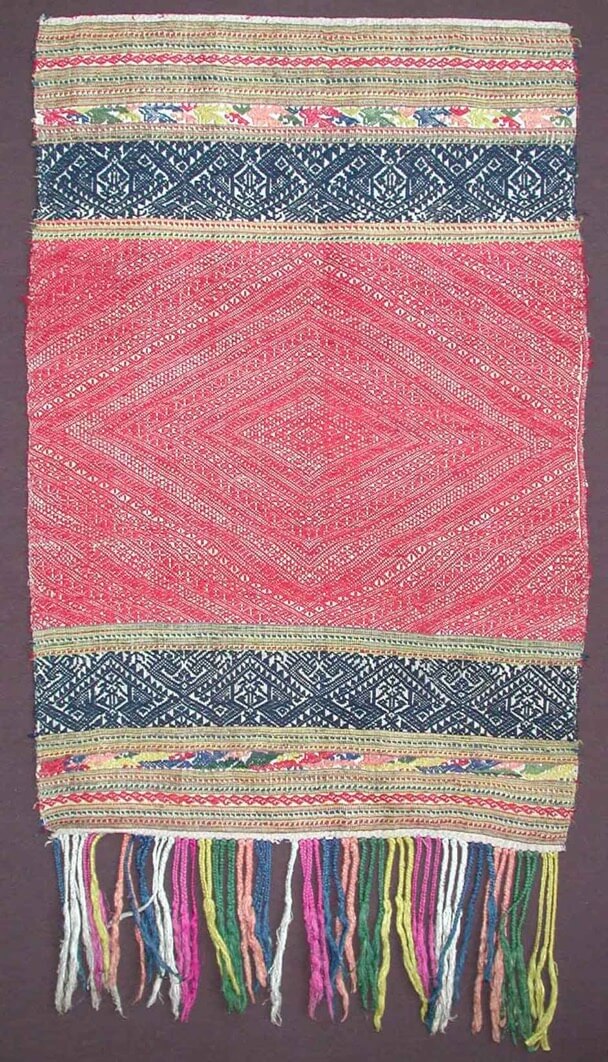 The revival of the weaving industry began in the 1990s—after the Laotian government began to reopen the country to the outside world. It has taken place largely under the aegis of tourism. Such commercialization has its price. Weaving on a hand-loom is a slow business; the finer the fabric the longer it takes. Most tourists can’t tell the difference, nor do they necessarily appreciate innovative design. So weavers, even if they know how to do it better, cut corners and produce inferior copies of what went before, knock-offs of the textiles they or their forebears once made. Meanwhile the significance of many of the motifs in Lao textiles has been lost. “A song with no words” is how Mary Connors describes them.

Nevertheless, these newly made textiles, purchased in the market at Vientiane or direct from the weaver’s hand, are really something to behold: alive with colours that are sometimes just this side of raucous, they employ a wide range of complex weaving techniques. Take, for example, the striking three-dimensional pattern that is referred to by specialists as dove-tail tapestry weave. Or the supplementary floating weft—a technique that sounds like it might be a martial arts move. The complexity of these weaves is intensified by deliberate visual blurring, an effect achieved by the use of tie-dyed thread (known to textile specialists by its Indonesian name, ikat).

For the traveller, these Lao textiles are liable to induce the Marrakesh carpet shop syndrome. That is to say, you end up buying more than you meant to. Luckily—luckily for the buyer, that is—they are also seductively inexpensive. But most of them are still not a patch on the originals. 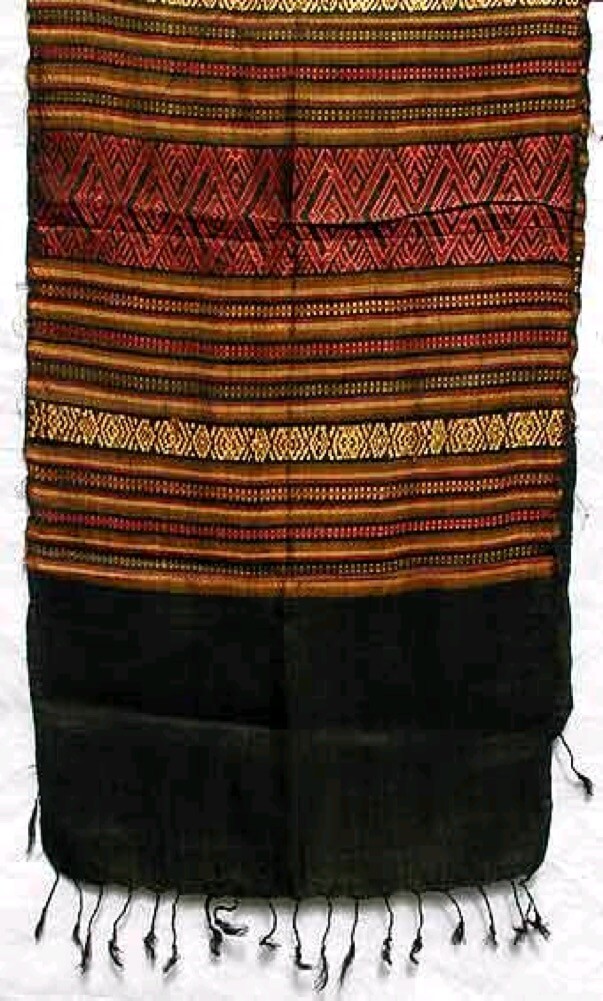 Since 1990 an American weaver, Carol Cassidy, has been trying to put this right. In her workshop in Vientiane, a colonial mansion half way between the Mekong River and the Museum of the Revolution, she makes textiles for foreign collectors. The pieces from her workshop—she employs about thirty weavers—are wondrous. They are not cheap: some of her wall hangings cost thousands of dollars. What Carol Cassidy has done is introduce, or reintroduce, into Laotian textile manufacture the principle of quality control—and the idea of innovative design within a traditional vocabulary of motifs and weaving techniques. She has also done some shrewd product positioning: the prices put the pieces from her workshop in an exclusive zone, the realm of the connoisseur, of the customer who is looking for the quality that she wishes to produce.

That it has taken an outsider to do this is understandable: Laos has been out of the loop for two decades as far as the world market is concerned. In Vientiane, though, this has become a sore point. Carol Cassidy got into hot water with local weavers after an article appeared in the Wall Street Journal which suggested that she had, in the words of the article, revived the silk-weaving tradition in Laos “more or less singly-handedly”.

On the contrary, her local critics point out, there are a number of Lao weavers still at work who have maintained their skills through all the travails of the last thirty years. How else would it be possible for the art to be revived?

Ms Cassidy’s local rivals acknowledge that she has done them a service by putting Lao weaving on the map; but in their work they offer other interpretations of the weaving tradition. I visited the most celebrated of them, Kongthong Saisnath, in her house on the outskirts of Vientiane. For her it is a point of pride to maintain an aspect of traditional weaving that Ms Cassidy seems less concerned about: the use of natural dye—yellow from turmeric, for example, red from the excretions of the lac insect (which also produces the lacquer used by cabinet makers), blue from the leaves and stems of the indigo plant, green from banana stalks.

Chatting about these dyestuffs with Kongthong was a special pleasure. It reminded me of my grandmother and the childhood trips I took with her to collect lichens and boil them up into dye, of that moment when the vegetable world was magically transformed from grey-green to polychrome. The red ikat scarf I bought from Kongthong’s shop sends me into a reverie when I look at it. It must replicate a transitional object of my early childhood, some treasured scrap of fabric once possessed, now lost.

It’s a little bit embarrassing to say this, but I find myself clutching the scarf for reassurance as I write. And experiencing waves of gratitude towards its maker, to Kongthong—and to Carol Cassidy, to my grandmother, and the weavers of the world—the unknown legions working with skill and dedication to make these beautiful, tactile, highly useful things. ★