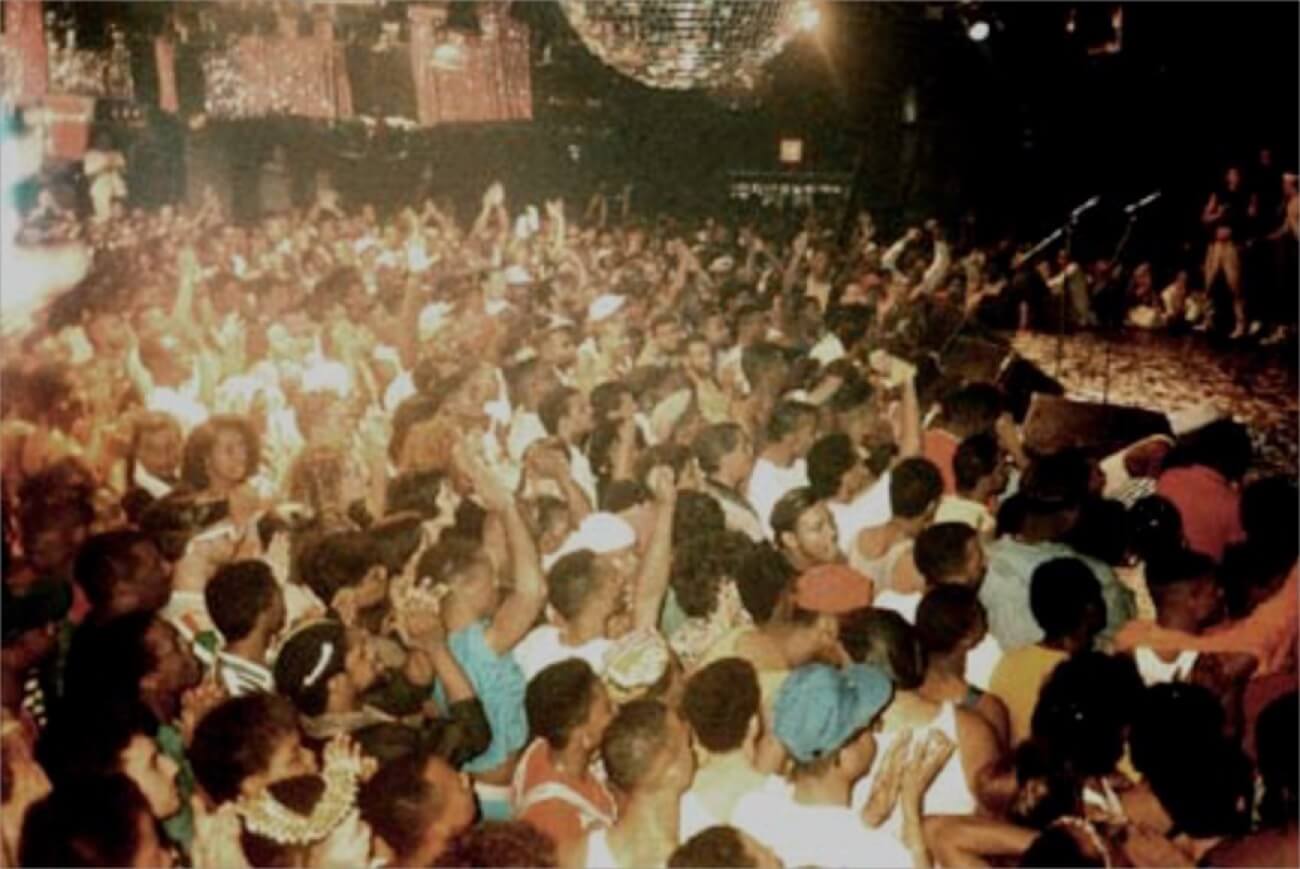 On a crisp winter’s night in 1984, in New York, with Mick Jagger, my then employer, and the art dealer Robert Fraser, I went—for what proved to be the last time—to the Paradise Garage, a black, gay dance place in the West Village, one of the most remarkable night clubs there’s ever been. Keith Haring, the graffito artist, then on the cusp of fame, was there too, in his white T-shirt and Buddy Holly glasses. And a Saturday-night crowd, mainly African-American, mainly male, numbering about two thousand.

The Paradise Garage was just that—a garage. A multi-storey car-park on King Street, with one level transformed for the club. It was early morning when we arrived; the place had been packed since before midnight. There were big-finned cars parked inside the ground floor entrance, left over from the day, their bumpers gleaming behind concrete pillars. In the middle of the parking area stood an airport-style metal detector. Would-be patrons of the club were obliged to pass through it. But the metal-detector seemed to be less of a security precaution than a rite of passage, a threshold leading to another world. A curved concrete ramp led up to the second level of the building. From there it was straight onto the dance floor.

At the Paradise Garage you had to dance. There was nothing else to do. No alcohol was served. There was only a juice bar—busy, noisy, but not that cruisy. Dancing was the thing. And cocaine was the drug of choice. Grandmaster Flash and Melle Mel’s anti-coke rap number from the previous year, “White Lines (Don’t Do It)”, was high on the playlist; but many of the club-goers were neglecting the crucial parenthesis.

The last days of disco, the dawn of hip-hop

The mid-eighties were the heyday of the Garage, coinciding with the last days of disco and the dawn of hip-hop. Larry Levan, the emcee, played both kinds, end-to-end, in a style that Hilton Als, a New Yorker writer who is a deejay himself, has labelled, with fond irony, the “disco of cruelty”.

“We stood in the DJ booth and watched,” Als wrote recently.

All the queens and fag hags were dancing on the floor below him, but Larry Levan was not interested in their love. He was interested in testing the limits of his audience’s endurance. He played music that imitated the effect of the drugs his audience had taken… one short intense burst joined to another by a bass line.

Gloria Gaynor, Donna Summer and Patti Labelle—the reigning divas with their mellifluous noms de danse—all of them got needle-time at the Garage. But so did the new sounds then entering the musical domain at the mixing desks of the rap masters—the scratches and yelps that were joining the fixed beat of drum machines.

In the mix at the Paradise Garage were the seeds of the later flowering of modern dance culture: house music, which Larry Levan has a claim to have invented; and its tricky-to-distinguish successors, rave, hardcore, jungle and the rest. At the same time, out on the floor at the Garage, a profusion of new, vertebra-threatening dance styles was in evidence: breakdance, robotics, electric boogie, styles that still had the bloom of youth on them.

Manhatã Caetano Veloso   A canoe, an Indian canoe, Cuts through the morning, north to...

The man in the white T-shirt

One club-goer who was mightily struck by all this was the man in the white T-shirt and Buddy Holly glasses: Keith Haring. In his journal he describes how the scene at the Garage was the inspiration for the succession of hieroglyphic dancing figures with which he plastered New York in the early 1980s. No surface was safe from Haring in those days. Starting as a subway graffito artist—though art-school trained—he painted his vibrant designs onto T-shirts and lapel buttons, walls and ceilings, windsurfer sails and spars, dirigibles and postage stamps: a never-ending parade of running, kneeling and dancing men and women, barking dogs and pyramids (the latter perhaps derived from the curious Masonic symbol on the US dollar bill). The figure of the dancing man, in particular, had a central place in Haring’s visual vocabulary: sometimes the man is depicted with an electric bulb in his hand, lit up by the energy of movement.

Haring painted at high speed, ambidextrously, often in front of the public, covering vast spaces with great rapidity. His line is a thick, funky line that never stops. This, you could say, is painting that aspires to the condition of dance. Once, for a gig at the Garage, Haring body-painted the singer Grace Jones, wrapping her from head to toe in this dancing line of his, closing the circle between graphic art and choreography. The ritual was photographed—you guessed—by Robert Mapplethorpe.

I’ve never met anyone who visited the Garage who did not recognise the special quality of the place. It’s good to see this evoked in Haring’s generous-spirited journals. The Garage style was the result of a unique collision of African-American music and dance with the gay avant-garde. It was an example of what Robert Faris Thompson, the art historian who contributes an introduction to Haring’s Journals, has elsewhere called the “flash of the spirit”. Haring was the Toulouse-Lautrec of this new dance culture; the Paradise Garage was his Moulin Rouge.

The Garage closed in 1987.  Its clientele were high on the hit list of the human immunodeficiency virus; many of them discovered too late—to borrow a phrase from the Jagger-Richards number—that they’d been dancing with Mr D. Robert Fraser, who was in our party at the club that night, was one of them. He died in 1986. So was Keith Haring: he fell victim to the viral cull in 1990. Larry Levan died in 1992.

In the entry in Haring’s journal for October 2, 1987, after the final party at the Garage—an event that lasted an entire weekend—he wrote “it’s like losing a lover when everything was going just fine… Grace came for a little while, but didn’t stay long.”  It was Grace Jones he was referring to, but perhaps he meant something more. The Garage, for all its flash and kitsch and drugged debauchery, was a place apart. And sometimes it was truly touched with grace. ★