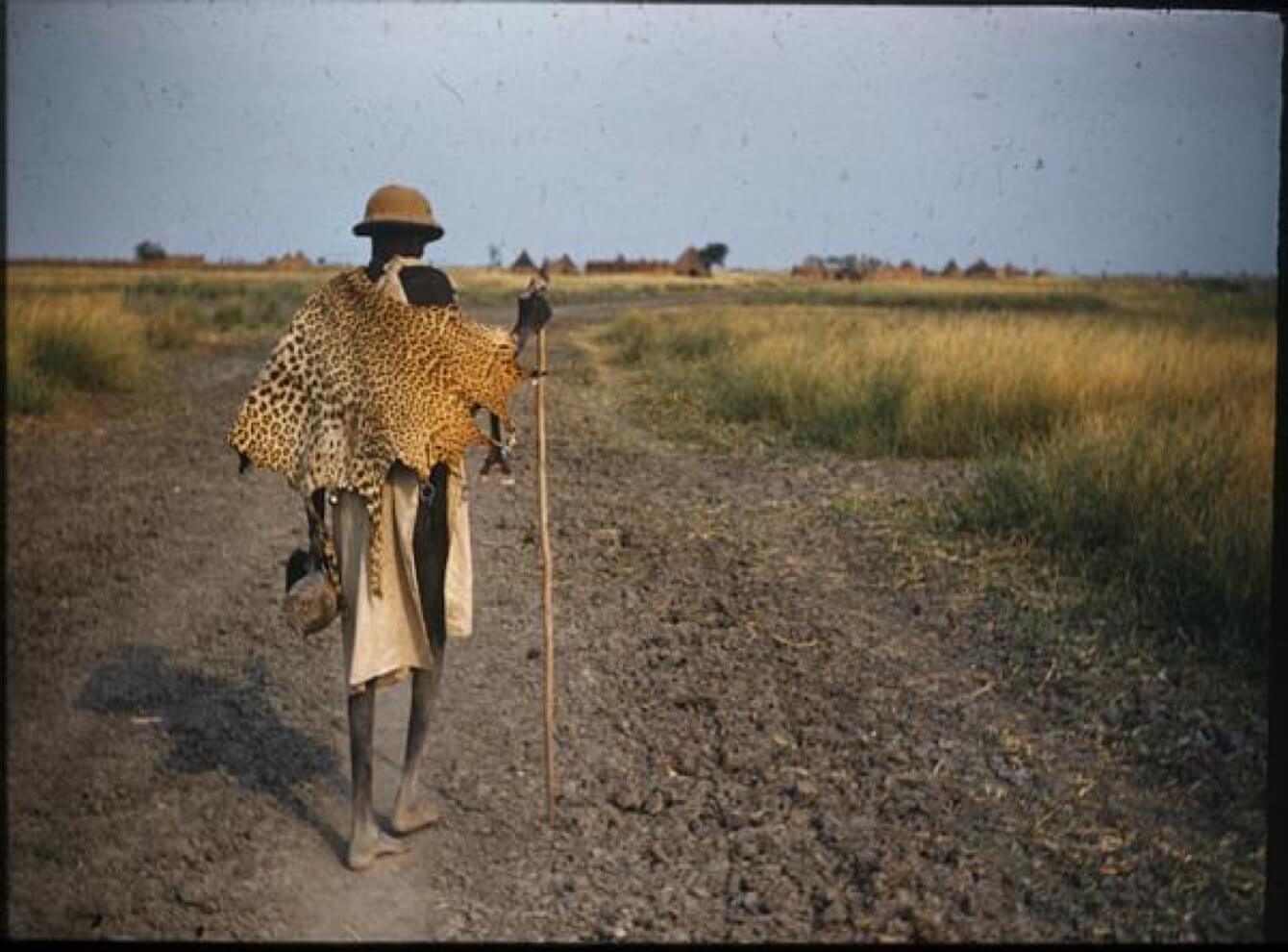 For fifty years, Southern Sudan has been a locus classicus of the British tradition of social anthropology, its ethnographic literature subject to countless reassessments by scholars who have, in many cases, never set foot on Sudanese soil. The fame of the Azande, the Nuer and the Dinka, the most numerous and best documented of the many ethnic groups that inhabit the region to which Southern Sudan is central, has spread well beyond the confines of the discipline. They have come to define the lay notion of what anthropologists write about (or what they used to write about): remote, unlettered peoples, largely unencumbered by material possessions, living beyond the reach of the State.

The Nuer, in particular, cattle pastoralists of carefree self-regard and warlike demeanour, whose territory covers a swath of swamp and savannah land in Sudan and Ethiopia, seemed to conform perfectly to a romantic stereotype of primitive culture, or the male version of it. The fame of the Nuer, and their reputation as the cynosure of the primitive, is largely due to the work of the late Sir Edward E. Evans-Pritchard, a social anthropologist of formidable application, whose eleven months of malaria-ridden fieldwork in the early 1930s among the Eastern Nuer, near the Ethiopian border, resulted in a trilogy of books that can claim to be the most comprehensive ethnographic record of any African people. 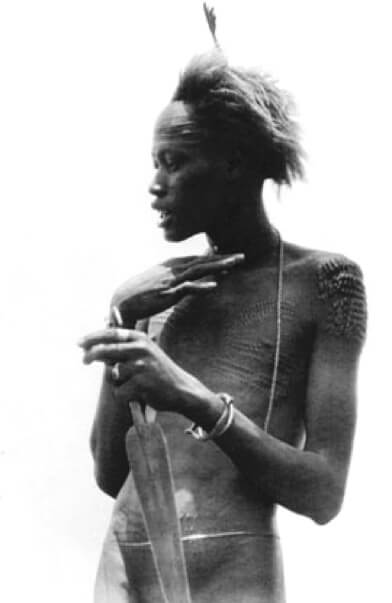 In The Nuer (1940), Kinship and Marriage among the Nuer (1951) and Nuer Religion (1956), Evans-Pritchard (or E-P, as he is known among his colleagues and successors) presented a portrait of a people in a symbiotic relationship with cattle— “mutual parasitism”, he called it—who valued their livestock far beyond the material contribution they made to human survival. Cattle in the form of bride wealth were the means by which Nuer affirmed social ties between kin groups; as sacrificial offerings, they were the channel of communication with the remote divinity that oversaw their existence; and they were the subject of an elaborate aesthetic based on variations in the colour of their hides. To those seeking to understand Nuer social and political life, E-P’s advice was simple: cherchez la vache. In his oeuvre the dominant image is of a people living largely in isolation from the outside world, moving between village and grazing ground across the grassy floodplain of the Nile, singing to their oxen, acknowledging no higher authority than themselves—an image, contra Thomas Hobbes, of ordered anarchy.

E-P’s ethnographic monographs—he wrote a comparable sequence about the Azande, a sedentary people of rather different character living in the Sudan-Congo borderlands—not only dominated the literature on the peoples of the region, they also set the research agenda for a generation of anthropologists, in Africa and elsewhere. Their theoretical sophistication and extraordinary detail made them virtually unassailable. The people of the Nuer trilogy seemed to exist, curiously, outside time.

The Nuer in time

As an anthropology student, arriving in Khartoum in the 1970s, I was surprised to find that the labourers on the high-rise buildings going up in the city were not local people but migrant Nuer, who spoke Arabic as well as their own Nilotic language and seemed quite at home in the city. Like the Mohawks in High Steel, the American Indian construction workers in New York described in the essay of that title by Joseph Mitchell (included in Edmund Wilson’s Apologies to the Iroquois)—an ethnic minority who took the most perilous jobs in town—these young Nuer men monopolized the risky end of the building trade in Khartoum. Fearless, from a homeland so flat that a ten-story building was the tallest thing they had ever seen, in Khartoum they became the equivalent of Edmund Wilson’s Mohawks. They became the Nilotes in high steel.

These labour migrants were the first wave of a series of partial displacements of the Nuer from their homeland that started under the British administration and continues to the present day. In the half-century since E-P’s fieldwork and the twenty-five years since his death, the Nuer have had to cope with a series of profound political and economic shocks. The discipline of anthropology has also changed, adapting to the altered relations between its traditional subject and the civilization that spawned this form of knowledge.

At the time of E-P’s research, the Nuer were under the political suzerainty of the Anglo-Egyptian Condominium, administered by the tiny cadre of military men and Oxbridge graduates who were known—those of them who served in the swampy Southern Sudan—as bog barons. Two decades later, the British were gone and the independent Republic of Sudan was born, with state power consigned to the hands of a political elite dominated by northern riverain Arabs, different in culture, religion and political tradition from Southerners like the Nuer. Since then, there have been two civil wars in Sudan—or one war with an episode of peace. It was during this short peace that Sharon Hutchinson did the field research which forms the basis of Nuer Dilemmas, her remarkable updating of the ethnographic record.

A visit to Seydou’s studio

The spirit of light in the African Sahel 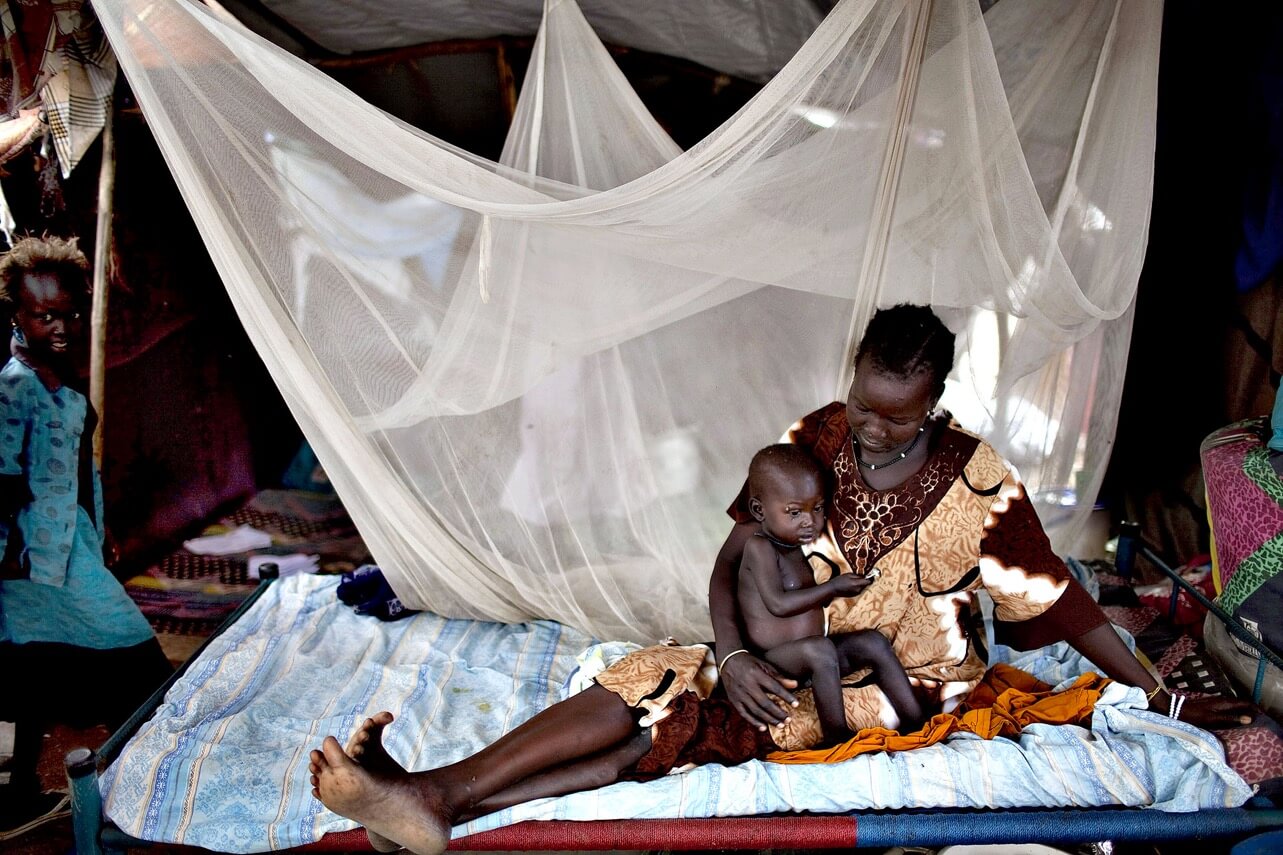 In the intervening years, as she indicates in a prologue, the image of the Nuer as a pastoral people in harmony with their environment has been replaced, in global media awareness, with a picture of the entire Southern Sudan as a disaster zone, decimated by famine and conflict. The disaster is real: many Nuer have lost their cattle; a good proportion have been driven, along with other southerners, to the periphery of northern Sudanese towns, forming a landless sub-proletariat, disfranchised and abused; Nuer children have been bought and sold as agricultural labour for mechanized farms in the North; many young Nuer men have taken to the bush as fighters in one or other of the rebel groups that now control most of the rural area of the South.

Yet the Nuer are not a hapless group of primitives submerged by the world system. Nuer Dilemmas shows in intriguing detail how their communities have both resisted and incorporated the fractured modernity of a malformed state. It also demonstrates the special qualities that social anthropology still has to offer in representing the durable logic of culture.

Revisionist ethnography of Southern Sudan has been a long time coming. This is partly because the conditions of fieldwork have been so difficult and partly because E-P’s oeuvre, time-bound though it is, still retains a remarkable degree of authority.  And Nuer themselves have not demurred from his account of their culture and political system. Educated Nuer continue to emerge against all odds from the eroding school and university system of Sudan, and none of them has formally challenged the image that is presented in the Nuer trilogy.

The most substantial modification of E-P’s view hitherto has been the work of a historian, Douglas H. Johnson, whose Nuer Prophets (reviewed in the TLS, June 2, 1995) is an immaculately detailed history of the institution of prophecy among the Nuer and its role in the successive conflicts that have beset them—conflicts with the colonial authorities, with post-independence governments, with other ethnic groups in the South and among the Nuer themselves. Johnson’s book shifted the Nuer from the eternal present tense of classical ethnography into historical time, while also engaging in a theoretically sophisticated dialogue with indigenous concepts of history, a project that E-P, though he was unable to carry it out himself, would certainly have applauded.

Hutchinson’s book, the product of a two-year sojourn in eastern and western Nuerland in the 1980s—a period of fieldwork that was supplemented by subsequent visits to Nuer communities in the diaspora and the war zone—tackles the legacy of Evans-Pritchard more directly. Respectfully but unremittingly, Hutchinson demonstrates the extent to which the Nuer trilogy is constrained by E-P’s determination to provide a systematic account of social institutions that were themselves in a state of flux, and by his tendency to identify with the male representatives of notable lineages. His account, she shows, is also limited by his minimal knowledge of the Nuer groups living to the west of the Nile, in the heart of Southern Sudan, groups that have had, until recently, significantly less interchange with the world at large. 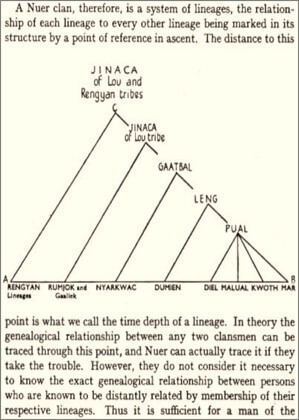 Lineage diagram from The Nuer by E.E. Evans-Pritchard

At the time of E-P’s fieldwork in the 1930s, she points out, Nuerland had only recently been brought under colonial control. Its subjugation involved several punitive expeditions, climaxing, in 1927, with the bombardment by the Royal Air Force of the so-called pyramid of Ngungdeng, a huge earth mound built by the followers of a Nuer prophet who had been at the forefront of non-cooperation with colonial rule. These events are scarcely mentioned by E-P, yet the fraught situation prevailing as a result of this and other interventions by the authorities under whose aegis he worked was arguably the chief factor framing his research.

For Hutchinson, doing fieldwork half a century later, Nuer interpretations of such external events, and incorporation into their sense of themselves, form the principal subject of her inquiry. One of the many engaging aspects of Nuer Dilemmas is the sense Hutchinson gives of the process of field research, of the technique anthropologists call participant observation. This consists in large part of the art of conversation. There is a vivid sense of her interaction with thinking, talking, joking Nuer men and women. They are engaged in constant debate, like other people in the world, about the meaning of the new things in their lives—guns and money, state power, literacy and the changing relations between the sexes.

Hutchinson describes the elaborate joking relationships she established with village-dwelling Nuer—based on her own ambiguous status as a married woman, yet one who was puzzlingly unaccompanied by a spouse or children—and how these enabled her to break through gender stereotypes. She also describes her discussions with educated Nuer, including the Commander-in-Chief of the Southern Sudan Independence Army, a largely Nuer rebel faction that currently administers large tracts of Nuer territory. Nuer Dilemmas does not seek to impose a false coherence on the debates that rage among the Nuer about their future, but by means of the classic virtues of anthropological research—detailed linguistic analysis, subtle contextualization and intimate, telling anecdote—it provides a map of the myriad paths that cross and recross in the field of social change.

The research on which this book is based is an achievement in itself. Nuerland is a harsh place to live even in peacetime. To survive is noteworthy. To produce a book like this, an outstanding contribution to the already remarkable scholarly literature on the peoples of Southern Sudan, is a triumph. Fortunate is the outsider who has the chance to live among the Nuer. But fortunate also the Nuer, to have such outsiders live with them. ★