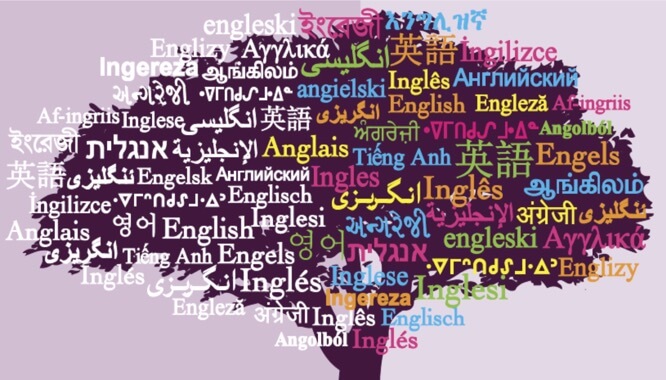 English—our genial latinised low German vernacular—has become a world-conquering, universal language—or as close to universal as the world has yet seen. A quarter of the world’s population speaks it; for half of them it is their first or second language. It is the lingua franca of world commerce, technology and tourism. For all these reasons, according to the linguistics scholar David Crystal, we face the possibility, a few centuries hence, of a world where more or less everyone speaks English, from childhood onwards.

If English were to be the only language people could speak, Crystal warns, it would rob the world of the cultural riches embodied in the six thousand other languages and dialects currently in existence, not to speak of those that have already vanished. Such an outcome, he wrote recently, would be “the greatest intellectual disaster that the planet has ever known.”

It’s a millenarian prospect, the putative transition from a multitude of tongues to a single universally understood language. It would be a return to Babel, to a world before language divided us, or—to invoke a later myth—a permanent Pentecost, when we would hear everything said to us as though it was spoken in our own tongue.

I was travelling in Angola earlier this month, in a continent that is home to more than two thousand languages, a third of the world’s total. It is hard to imagine that a single tongue could ever triumph over this extraordinary diversity. Africa is a profoundly polyglot continent, with a higher density of languages than any other. The vast majority of people in sub-Saharan African countries speak at least two: their local mother-tongue and a national lingua franca. They probably also speak a world language—English, French, Portuguese or a version of Arabic. One for the home, one on the street, one at the office.

In Luanda, the capital of Angola, just before I left, there was a party for a visitor from Burkina Faso, the former French colonial département of Upper Volta. The speech the visitor made—which was in French—was translated informally into half-a-dozen other languages: first Portuguese, then English, and simultaneously Kikongo, Mbundu and Romanian. (The latter may have been just for show. As far as I could see there were no Romanians present.)

In the yard outside teenagers were dancing to soukous, juju, reggae and hiphop—with lyrics respectively in Yoruba, Lingala (one of the linguae francae of Zaire), and variants of American and Caribbean English. A Brazilian soap opera was playing on the television.

The event was a scene from the world after Babel—a comfortable post-Babel populated by accomplished linguists. To the party-goers the plethora of languages was a source of pleasure, not difficulty. Almost everyone at the party understood Portuguese, Angola’s national language, or English, so the translations of the guest of honour’s speech into other languages were more an adornment, a display, a form of praise.

Burkina Faso, homeland of the guest of honour at this party, exemplifies this African gift of languages. The name of the country, it is explained to outsiders, means “pays des hommes intègres” or  “land of incorruptible people”. (The latter translation is sometimes accompanied by knowing laughter.) More precisely, burkina means “honour” or “integrity” in Moore, the language of the Mossi people, one of the seventy-odd languages spoken in the country, while faso means “land of the ancestors” in Dioula, another of the languages spoken there, and elsewhere in the Sahelian zone. The term Burkinabe, meaning people of Burkina, incorporates a plural suffix from a third language, Fufulde. How the notion of “people of the land of the honourable ancestors” is packed into four syllables may say something about the cosmology of the Burkinabe. The official language of the country, meanwhile, is still French, for Central and West Africa is the one part of the world where French is still giving English a run for its money as a global language.

The figures I cite above for the number of languages spoken in Burkina Faso (and for the number in Africa as a whole) come from Ethnologue, an encyclopaedic website maintained by the Summer Institute of Linguistics. If you want details of any language in the world— and there are 6,703 by their latest count—this is the place to go.

The Summer Institute itself, however, has a millenial vision of the future of these languages, a vision which goes way beyond the fears of David Crystal. SIL is an evangelical missionary organization with a special mandate: translation of the gospel into every known language. Formerly known as the Wycliff Bible Translators, the founders of the organisation believe, at least officially, that the Kingdom of the Last Days will come about when the Christian message is heard in every part of the world, when, in the words of the Revelation of St John, the “Great Commission” to the Apostles is fulfilled and disciples have been made among all peoples.

Accordingly, since the end of World War II, there have been more than four thousand translators working to this end, many of them in SIL’s European headquarters in High Wycombe, England. They are waiting, ostensibly, for the day that there appears “ a great multitude… from every nation, from all tribes and peoples and tongues… crying out with a loud voice ‘Salvation belongs to our God’.” This, according to the foundational doctrine of SIL, will usher in the new heaven and earth foreseen by St John, where righteousness reigns and death is no more. It is a paradox of the Wycliff translators that they work, ultimately, towards the dissolution of the languages they chronicle so meticulously.

I’m not looking forward to the Apocalypse—neither the Biblical version, nor the secular dictatorship of the English language envisioned by David Crystal. The case for linguistic diversity can be put still more strongly: the variousness of languages, like biodiversity, is not only a pleasure in itself, but also a necessary condition for our survival. Languages live by borrowing from other languages; one language begets another.

And they do this faster, probably, than the Summer Institute can translate them, and faster than global capitalism can marginalize or homogenize them. For this reason I’m not as worried as David Crystal says we should be. I think we can take some comfort from the incorrigible fluency of our species. Only within the core of the anglophone world—in England and America—is it really possible to imagine that people would ever cleave to one language only and eschew all others. English may eventually become everybody’s second tongue; it does not mean that several thousand other languages cannot also endure. ✭