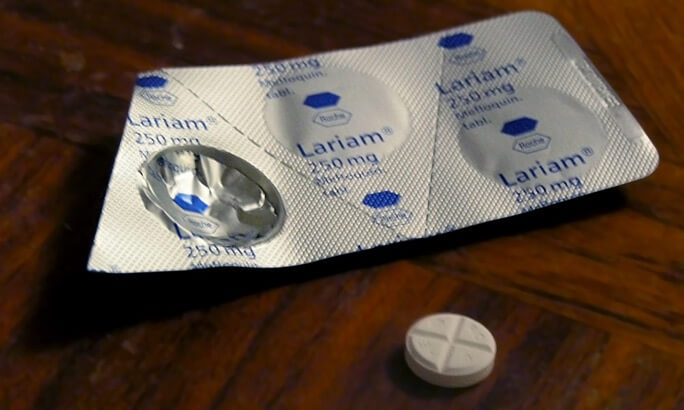 There are many reasons to cry in the night. And one of them is a drug called Lariam. I’ve taken Lariam, which is a prophylactic against malaria (generic name mefloquine) a number of times. On each occasion I ignored the growing number of warnings about its disturbing side-effects—even though I had written about them previously in this column. On trips to Asia and Africa I used the drug without any noticeable abreaction. My travelling companion on one of these trips was also taking it. He behaved a little strangely, but people behave strangely for all kinds of reasons, particularly when they are away from home.

So this time, when I woke up weeping in the early hours—though I had not done such a thing for a long time—I was still inclined to put it down to one of the usual suspects: loneliness, the loss of love, the death of friends, quarrels and betrayals, the tearfulness of everything. That is to say, not so much Lariam as lacrimae rerum.

But when I stopped taking Lariam the crying stopped. By itself, this doesn’t prove anything. Travel is stressful; the psychoactive effects of drugs are notoriously variable; placebo effects are powerful. But many users of Lariam seem to have had similar experiences. In some cases these were far worse than mine: seizures, panic attacks, suicidal depression and a range of physical ailments. Some have taken years to recover, it seems. One died.

Now a group of nearly a thousand sufferers in this country are bringing a claim for damages against Hoffmann-La Roche, the Swiss manufacturer of the drug. And an increasing number of tropical medicine specialists are advising against the use of Lariam, at least as a prophylactic.

It’s a nuisance, because malaria is getting worse too—more widespread and more resistant to existing drugs—and, as of the late 1990s, Lariam is the most effective prophylactic there is. More than a million people a year die from malaria, mostly in Africa. Statistically speaking, it is a far greater threat to health than Aids. In Europe the disease was thought to have been brought under control in the last century by draining swamps where mosquitoes breed, most famously in the case of the Pontine marshes outside Rome. But now the swamp thing is back: malaria is on the rise in Europe again. International air travel is responsible for this. There are ten times as many cases of malaria in Europe as there were five years ago—two hundred thousand a year.

I’ve had malaria and it’s no fun. When I woke up in the night in Angola, feeling feverish and worried, I wondered if I had it again. Some of the thought disturbances induced by the comings and goings of malarial fever—its rages and delusions—are similar to those reported by Lariam users. The brain goes into overdrive, then relapses.

At first, during the attacks of melancholia I experienced while I was on Lariam I became obsessed by the name of the drug itself, an annoying near-anagram both of the disease it is supposed to prevent and of one of its symptoms, delirium. The words knotted themselves in my brain in a self-referential tangle: lariam, malaria, delirium. And lacrimae rerum.  It was diverting for a while. Such intense, hyper-real aspects of brain fever have their uses—writers and artists have sometimes gone to great lengths to induce them, often pharmacologically. But Lariam is nobody’s idea of a recreational drug.

Is it possible to know the ultimate cause of mental events of this kind? Or even the proximate causes? It’s hard to be certain. It is tempting to ascribe serious mood swings, along with all manner of afflictions and failings, to external causes. Illness exculpates us. It means it’s not our fault. And drugs, also, are easy to blame. So if your state of mind is not the result of disease, you may be inclined to think it is caused by its supposed cure.

But we should not be overly suspicious of ourselves. We may be constitutionally inclined to pin blame on something or someone else, but this doesn’t necessarily mean there really is no outside cause. In the case of Lariam, I can’t prove it, to myself or anyone else, but I feel pretty sure it had some part to play in my malaise that time in Angola.

In response to the bad publicity they’ve had, Roche have recently expanded the list of contraindications in the literature that accompanies packets of Lariam. If you’ve had any prior experience of “severe changes of mood”, they now say, you should not use the drug. So you can’t say they didn’t warn you. But “severe changes of mood” are something most of humanity has experienced at one time or another. If these instructions are respected to the letter everyone will have to give up using the drug.

And that’s what I plan to do. I’ll take other prophylactics instead, marginally less effective and convenient, perhaps, but also less anxiety-provoking. Or I’ll dispense with them altogether: sleep under a mosquito net impregnated with insect repellent, and hope to pass the night without waking or crying. ★

In the years following the publication of this article I took to using a treated net and no prophylactic. That was until I got malaria again. Now, like the majority of travellers, I take doxycycline when I am in malarial areas. Doxycycline is a long-established antibiotic that doubles as a malaria prophylatic. It is safer than Lariam and cheaper than Malarone (the latter—atovaquone/proguanil hydrochloride—now the favoured alternative in most areas of the world), though you can’t take any of these anti-malarials indefinitely without risk. In the future the received wisdom on malaria prophylaxis may change again. At least there is now a better treatment for malaria, the wondrous artemisinin, derived from a traditional Chinese herbal remedy, which is used in combination with previously existing anti-malarial drugs.