It’s hard to love ants. Spiders and scorpions and cockroaches excepted, they are probably our least favourite insect. They give no honey; they do not brighten the air nor do they chirp in hedgerows. They are small and dark and silent and live underground where they cannot be seen. They are venomous and they bite. They teem and swarm, moving en masse, like robots, in cryptic legions. And they are ugly: their huge heads and tiny waists make their bodies seem like grotesque, anorexic versions of our own. The industry of ants is a constant reproach to us; their most surprising feature—their social organisation—seems sinister and totalitarian. Only our luck in being several thousand times as big keeps us safe from them.

And ants, needless to say, do not love us. They hardly notice us. This is hard to take. They challenge our anthropocentrism. For them, it seems, we are not very important. And that is the truth of the matter. Ants are the most successful organisms in evolutionary history: there are over 8,000 species, distributed everywhere on Earth except the polar regions. In Peru, we learn, 43 different kinds of ant have been recorded in a single tree. Compared to this, we primates are a flash in the pan. Ants antedate us and will undoubtedly outlast us. There are a million times more of them than humans—it has been estimated that there are ten million billion ants alive at any one time. That is a quarter of a million, on average, for every acre of land on the Earth’s surface.

The greatest numbers of ant species, and the most spectacular, are to be found in tropical rainforests and savannahs. In such places it can be a disconcerting experience to witness an invasion of driver ants, a predatory species that hunts at night as well as in the day. Driver ants move in columns up to a foot in width and a hundred yards in length, each composed of millions of individual ants. Waking up in the darkness with a marauding column in your tent, it can seem as though a thick black oiled rope is running over your bed, over you, across the floor and out again: an endless skein of insects, running along each others’ backs, their antennae and mandibles threateningly erect. A column of driver ants will attack lizards, snakes, rodents, anything in its path. If you happen to be dead, the ants will eat you, too; if you are not, they will just bite you. With their preposterously overdeveloped jaws, individuals of the soldier castes that form the flank of the column can scissor human flesh with ease. They are the rottweilers of the myrmecological world.

Ants can eat us, but we cannot eat them, or not with pleasure. Unlike termites (which have a rich oily taste something like pork scratchings), ants, with a tough outer layer of chitin and a nasty whiff of formic acid in their body tissues, are generally undigestible, except by other ants. (Even anteaters prefer termites.) Ants, furthermore, are resistant to radiation and, in the case of some species, industrial pollution; some can live in deserts; some can float; some can slow their metabolism down and survive under water for days on end. 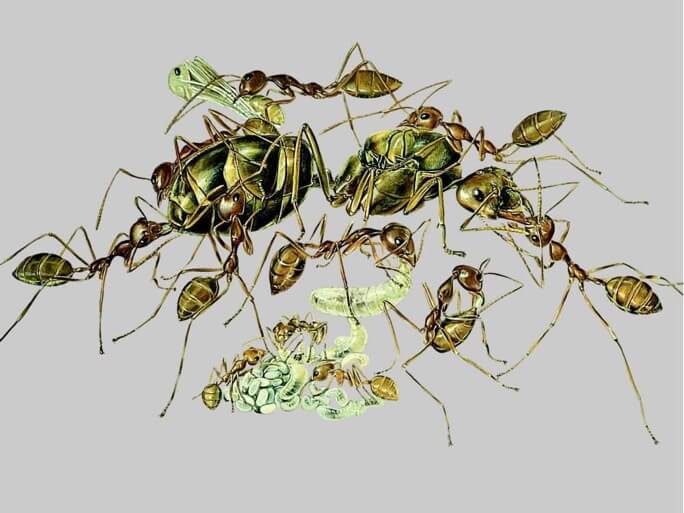 In The Ants, Bert Holldobler and E.O.Wilson have produced an encyclopaedia of myrmecology. It is a book of fabulous erudition, the summation of two lives’ work. If anything could make one better disposed towards ants it would be this book. Describing the anatomy of the ant (also the subject of many intricately detailed drawings) the authors deploy a gorgeously recondite vocabulary. Thus we read of shagreened body surfaces (glossed as “like shark leather’”), of the plumosity (featheriness) and lanuginousness (downiness) of body hairs. We meet the gynandromorph, an individual combining patches of male and female body tissue; we contemplate the nasus, or snout, through which soldier ants squirt poisonous fluid at intruders. We are introduced to oophagy (egg cannibalism) and necrophoresis (the transport of the dead from the nest).

Naturally, Holldobler and Wilson do not share the usual disparaging human view of ants. “Paragons of the insect world”, they call them. They draw attention to the important function ants have in seed distribution and soil fertility and to their usefulness in pest control. Their attitude stops short of affection, however; admiration is as far as it goes, with an occasional note of awe. “Ants and termites,” they write, “are the superpowers of the insect world.” And entomologists, it might be added, are like the Kremlinologists of yesteryear, assiduously scrutinising the tactics of our competitors.

Ants antedate us and will outlast us. There are a million times more ants than humans: a quarter of a million for every acre of land on the earth’s surface.

Hence our unease. Ants are much more social than we are, more subordinated to the common good. Instead of individuality they have morphologically defined social difference. When we confront a swarm of ants we are hard put to know whether to think of it collectively, as a single organism, or as a group of individuals. An ant colony is a vivid illustration of the metaphorical equivalence found in certain strains of social theory between the individual organism and the body politic. But the anthropomorphic terms that are customarily used to characterise ant societies—caste, colony, queen, soldier, worker and so forth—may also be a source of difficulty. They make those societies seem more kin to ours than they are. The metaphors ricochet off each other: we describe ant societies with terms drawn from our own, then characterise some forms of mass human behaviour by analogy with the ants.

Why are ants so successful? Instead of the endless competition of human societies, where social hierarchies are continually demolished and rebuilt, ants have the division of labour written into their physiology. The ant colony is an almost exclusively female society, with the males remaining in the nest only until the time of their fatal nuptial flight. Like other social insects, males mate once and die. Workers, wingless non-reproductive females, are physically differentiated from birth, bred for toil and sterility. Enraptured by the queen’s pheromones, they subordinate themselves entirely to her welfare, licking her body and feeding her with eggs—their own eggs—and regurgitated liquids.

Ants waste no time; and, as Holldobler and Wilson inform us sternly in a chapter heading, Ants Do Not Play. They fight—in defence of the colony, the breeding unit—but they do not have civil wars or revolutions. The survival and expansion of the colony is the only aim of its members. The colony, in fact, can be thought of as a single diffuse being, a creature with 100,000 mouths.

One of the authors of the present work, E O Wilson, is well known for his advocacy of a unified theory of sociobiology. This theory, which involves an attempt to integrate the study of human societies into evolutionary biology, has been severely criticised by social scientists and other biologists, human social institutions being much less clearly related to a genetic substrate than those of the insects. But The Ants, while it inevitably employs terms for social relations that are derived from human societies, is free of the reductionist vision of human nature that made Wilson’s earlier books—Sociobiology and On Human Nature, so controversial. The Ants concerns itself with species for which sociobiology offers by far the richest descriptive language; the result is a masterpiece of natural history. ★