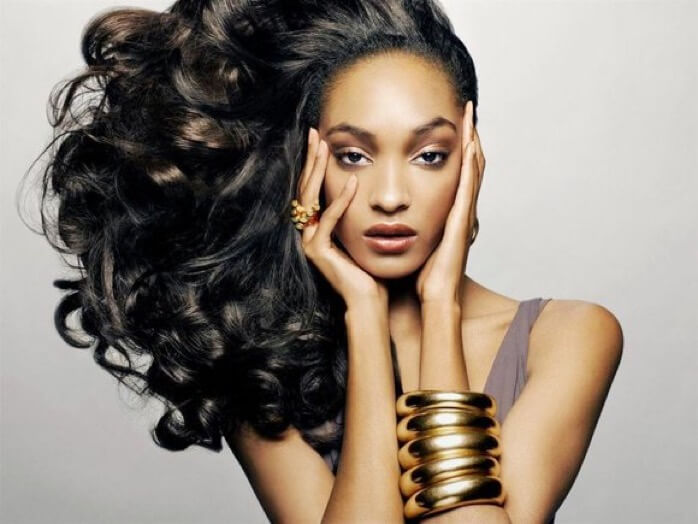 We live in a great age of hair. And in a great nation of hairstylists. When Rogério dos Santos, who works in the music business in Rio de Janeiro, was staying with me in London a few weeks ago there was one important thing he was set on doing before he left: getting his hair cropped ultra-short and sculpted with zig-zags and arabesques, in the style currently favoured by West Indian youth, and known as a fade. The particular design was a variation on something he had seen on the head of a British rap artist; Rogério was convinced it could only be done properly in Britain. And he may be right.

We went to Gee’s, a well-known West Indian barber in Kensal Rise, in West London. Rogério speaks only half-a-dozen words of English, so it fell to me to translate. I didn’t need to say much: the barber’s terms of art are few; and the man who cut Rogério’s hair was the silent type. He was fluent, though, with the clipper and the comb. He darted round the chair, the cluster of baby dreadlocks on the top of his head dipping and nodding as he worked.

He emerged an hour or so later, radiantly shorn, his head looking like flock wall-paper that had been struck by lightning. And flew back to Brazil with his new haircut that afternoon.

It’s a pity Rogério couldn’t stay for the final round of the Battle of the Barbers at Alexandra Palace last weekend. I went there with my old friend Sherman Hawthorne, these days a hairstylist to models and rock sta 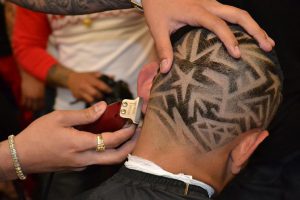 The Battle of the Barbers is one part of the Afro Hair Exhibition, an annual event where—I quote from the programme—“the country’s top barbers create the styles that will make a fashion conscious man of today a walkin’, talkin’, technical knockout.” It’s a race against time: the competitors have only twenty minutes from start to finish. On stage as we arrived the finalists were furiously inscribing runes and slogans and mysterious devices onto the heads of their models. One of them, Steve Campbell from Luton, whose model was his nephew, Arron, created a fade with a strikingly beautiful line-and-spiral effect, following the contours of the boy’s head like a Maori tattoo.

As a spectacle, despite these touches of elegance, the Battle of the Barbers looked more like sheep-shearing than hairdressing. But it is only a small part of the Afro Hair exhibition. The show encompasses the whole range of black people’s hair, from designs and dreadlocks and wigs and weaves to chemicals and curling tongs—and the kind of high-end showbiz hair-styling that is Sherman’s bread and butter.

Black people, women especially, spend considerably more time and money on their hair than white people, largely because of its drastic curl—cabelo duro—hard hair, as they call it in Brazil. If you want black hair to flip or flow or cascade it has to be chemically or thermally straightened. This is an art. Sherman and I listened to a spiel from the salesman for Soft Sheen, a market leader in chemical relaxers.

“It ain’t the size of the ship,” the salesman said. “It’s the motion of the ocean.”

“Indeed,” he said. “And when did you last see a black girl in the rain?”

There’s some history here. The writer and critic Henry Louis Gates Jr, in his memoir Colored People, devotes a chapter to the ritual of hair-straightening in his mother’s kitchen when he was growing up in West Virginia. It’s a passage I’ve quoted elsewhere that bears quoting again:

Mama would stroke that red-hot iron… slowly but firmly through their hair, from scalp to strand’s end. It made a scorching, crinkly sound, the hot iron did, as it burned its way through damp kink, leaving in its wake the straightest of hair strands, each of them standing up long and tall but drooping at the end like the top of a heavy willow tree…. How that scorched kink could be transformed through grease and fire into a magnificent head of wavy hair was a miracle to me. Still is.

In the 1960s hair-straightening became a political issue among African Americans: Malcolm X announced that for black people to straighten their hair was an act of self-hatred, a rejection of the natural state, an imitation of Caucasians. These days though—in Britain at least—trichological pluralism rules. Styles that only cabelo duro can sustain—locks and afros and shaven designs like Rogério’s—exist alongside elaborately processed hair and the flagrant use of woven and braided extensions (the latter something white models have recently picked up from their black colleagues). Post-modern black hair stylists think nothing of putting blond Heidi plaits in the middle of corn rows. The artifice isn’t hidden; it is there to be admired. Soon it will be routine. 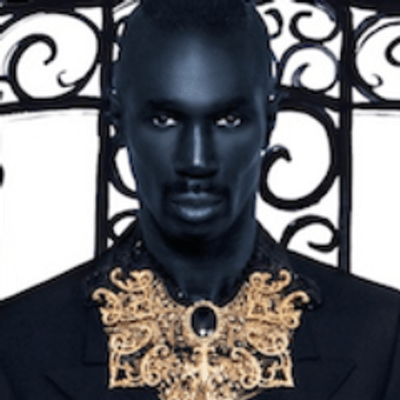 At Alexandra Palace Sherman and I passed stall after stall selling gallon jars of relaxing agents and fierce arrays of curling tongs. Not electric tongs, but old-style oven-heated ones like Henry Louis Gates’ mother used, and that women of colour here and in the US these days seem to be returning to. As Sherman explained, oven-heated tongs give black peoples’ hair a sheen that electric tongs can’t match, making the hair as shiny as the pages of a glossy magazine. There’s a problem, though: the effect is not weather-proof. Hair that’s been relaxed like this springs back to a frizz if it ever gets wet.

“And that,” said Sherman, answering his earlier question, “is why you don’t see black girls in the rain.”

Back home in Brazil Rogério has a different problem. The arabesques and lightning flashes in his hair are impossible to maintain without very fine clippers. He can’t find anyone with the skill to do it.

In the end, he told me when I spoke to him on the phone last week, the look got so ragged that he’s been forced to shave it all off.

He paused, then added, “It’s worse than that. I look like I’ve just come out of the army.” ★