A Norman castle in the north-east of England may not seem an obvious place to discuss the cultural heritage of South Sudan. But the university library here—next door to Durham castle—is the location of the most significant archive of colonial-era documents outside Sudan and South Sudan. And in recent years Durham University has become a centre for research into Sudanese history, attracting scholars from Europe and America, and—perforce less often—from the Sudans themselves. 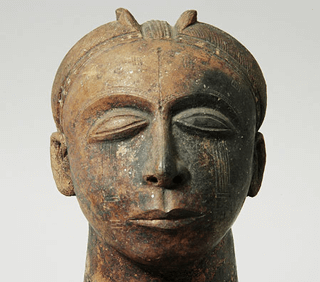 Detail of an anthropomorphic pot, carved by the Zande potter Mbitim in Li-Rangu, now in the Pitt Rivers Museum, Oxford.

In July Durham played host to a meeting of curators and researchers concerned with the heritage of material culture taken from the lands now comprising South Sudan. These include items of jewellery, clothing, furniture, weaponry and sculpture bought, bartered or stolen sometime in the nineteenth or early twentieth centuries. Some of these articles were presented by chiefs to their colonial masters, some confiscated as a punitive measure; some were looted by slavers; some purchased by explorers or early tourists. Now they are scattered in collections across Europe and Asia, the orphans of a violent history.

South Sudanese participants at the Durham meeting joined representatives of museums in France, Germany, Austria, Slovenia, Russia, Romania and the UK—key locations in this great diaspora of objects—to discuss, among other questions, whether there could there be a long-term role for such artefacts—and the histories they embody—in delivering South Sudan from its present state of violence and despair.

Anyieth d’Awol was one of the speakers on a panel I chaired that addressed this question. A lawyer and human rights activist, Anyieth is founder of the Roots project in Juba. She described her work over the past decade reviving the art of beadwork, including the bodices, corsets, bracelets and hats that were once a common sight in agro-pastoral communities in South Sudan, but which started to disappear during the 1983-2005 civil war. Anyieth explained how she had to overcome criticism from fellow Southerners who regarded her interest in this traditional art as politically retrograde. Today the spectacular garments painstakingly threaded and sewn by the craftswomen of the Roots project have found a market among high-end collectors in the United States, helping fund expansion of a workshop in Juba.

Jok Madut Jok, an anthropologist who was formerly an undersecretary in the Ministry of Culture, Youth and Sport, told the meeting that many young South Sudanese seeking education, in their anxiety to engage in dialogue with the modern world, felt under pressure to abandon their local languages and cultures. As a result, he said, they distanced themselves from the elders in their communities and from the history they had in common, neglecting what he referred to as the “fabric of their identity”. Jok singled out for criticism those Baptist and Pentecostalist churches that advocated the burning of indigenous religious objects and demolition of shrines—destroying ancient artefacts instead of preserving them.

Asked about the origin of the tiny glass beads used in their thousands in the corsets and bodices made by the Roots project, Anyieth d’Awol explained that they are still manufactured in Bohemia—now the Czech Republic—a country that has been the principal source of trade beads in Africa since the nineteenth century. A British archaeologist, Paul Lane, mentioned finding such beads while mapping a zariba—a nineteenth-century slave-trading enclosure—in Rumbek, in former Lakes State. Such histories of conquest and slavery—and trade and exchange—are inscribed in a multitude of such forts and enclosures across greater Bahr al-Ghazal.

Today war in South Sudan has brought archaeological research to a halt, while creating a plenitude of new ruins and burial sites for future archaeologists. War also threatens archives and museums. Fortunately—or unfortunately—there are only a few such collections of artefacts in South Sudan itself. One of these is in the old fort in Kajo Kaji, in former Central Equatoria state, near the border with Uganda. When I visited the fort some years ago there was a display there of iron hoes and spear-heads— used as brideprice in Bari-speaking communities—juxtaposed with a life-sized effigy of John Garang, leader of the ruling Sudan Peoples Liberation Movement until his death in 2005. Today Kajo-Kaji has been drawn into the new civil war. As fighting spreads to Greater Equatoria many of its inhabitants have fled to Uganda; the fate of the Kajo-Kaji museum is uncertain.

There is another trove of objects, currently in storage in Juba, that forms part of the National Archive of South Sudan. This collection of spears, head-rests, grave posts, paintings and musical instruments is intended to form the core of South Sudan’s national museum. But the museum project has been on hold since soon civil war broke out in 2013. The objects are stored in leaking prefab containers in the capital, Juba, near the Ministry of Culture, while the documents are in a rented house in Munuki, a part of the city that was a site of fighting in 2013 and again in 2016. The contents of the National Archive, a good part of which was lost to termites during the 1983-2005 war in Sudan, are once again at risk—both documents and objects.

Atem el-Fatih, from the Ministry of Culture, a folklorist who leads the Likikiri cultural collective, mentioned another collection, a cultural gallery maintained by a Madi chief in his house in Loa, a settlement on the Nimule road between Juba to Uganda. Attacks on vehicles and communities on the Nimule road are frequent now. When Atem last passed that way, he told us—on his way from Juba by bus—he saw that the chief’s house had been abandoned, the door left hanging open, the objects within at the mercy of thieves and rain.

Finally, there is the dang, the ceremonial rod of the Nuer prophet Ngungdeng. This was returned to South Sudan shortly before independence by the historian Douglas Johnson—who was also among the participants in the Durham meeting. The tumultuous reception given to the dang on its arrival at Juba airport in 2009 was striking evidence of the enduring symbolic power of ritual objects and the importance of prophecy among the Nuer—where prophets still play a part both in mobilization for war and in making peace. When last seen, Ngungdeng’s dang was in the hands of Riek Machar, a Nuer leader who was formerly Vice-President of the country, and is now head of the rebel SPLM-IO (Sudan People’s Liberation Movement in Opposition). Last year Riek was forced to flee the country for the second time; he is currently an exile in South Africa. The whereabouts of the dang are unknown.

In these circumstances no one—least of all those South Sudanese who spoke at the meeting—is advocating the return to South Sudan of cultural objects now held in European museums. But is it possible that greater knowledge of them might usefully inform the country’s interrupted process of nation-building? If reproductions and representations of these venerable objects were more widely available, could they be used to promote discussion of the history they are part of, bringing an understanding of South Sudan’s past to bear on its present? And could the custodians of memory—the chiefs and elders of the communities where these articles were made—cast further light on their historical significance? The Durham meeting—organised by an anthropologist, Zoe Cormack—is the first of several planned over the next two years, where these and other questions will be pursued.