In the music business many have been called kings: Elvis Presley and Michael Jackson, kings of pop; Benny Goodman, king of swing; Muddy Waters—with his growling vocal lines—king of the blues.

But when it comes to the king of blues guitar, the title surely goes to B.B.King, whose death at 89 was reported yesterday. His trademark vibrato held our ears and eyes spellbound: the fingers of his right hand fluttered faster than the eye could see; the high notes were bent with heart-stopping plangency. He compared this idiosyncratic vibrato technique to the wings of a butterfly opening and closing in flight, explaining in a 2012 interview that he had been trying to reproduce the sound that Bukka White, his mentor and mother’s cousin, made playing slide guitar using a steel tube or a glass bottleneck. 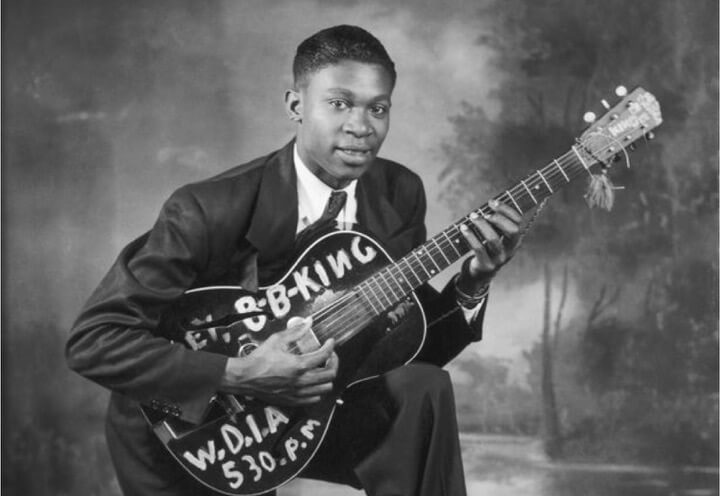 and I tried and he showed me how—but I got stupid fingers, see, and I just couldn’t do it… The sound Bukka made went all through me, and I devised my own technique for producing the tremolo without the slide… I swivel my wrist from my elbow, back and forth, and this stretches the string, raising and lowering the pitch of the note rhythmically. With my other fingers stretched out, my whole hand makes a fluttering gesture…like a butterfly flapping its wings.

The technique can be seen up close in the recorded versions of his crossover hit “The Thrill Is Gone”, best known of all the songs in B.B.King’s repertoire—notably in a performance at the Montreux jazz festival in 1993. On the day of his death I checked out the clip on Youtube: I was visitor seventeen million seven hundred and ninety-one. (Of those seventeen million, I’ll acknowledge, quite a few were me, on repeat visits.) And it’s gone up a few million since then

In case you’re not one of these millions, here’s how the song goes, in its lyrical simplicity.

Rivalling the Montreux version of “The Thrill Is Gone” is a performance recorded in Kinshasa in 1974. (There’s a glimpse in the audience of Muhammad Ali, on the eve of his historic fight with George Foreman.) The Kinshasa clip has had a mere 300,000 visitors, though King’s performance here is quite as compelling as at Montreux. He recorded dozens of other versions of the song, often duets with celebrated blues guitarists who were keen to play with the master; the last of these filmed just a year before he died.

One more listen, maybe? Another taste of sweetness and grief? Then, when that’s passed, let’s turn to the upside of the blues, to another B. B. King number: “Let the Good Times Roll”.

Hey, everybody, let’s have some fun
You only live but once
And when you’re dead you’re done
So let the good times roll

Carpe diem. Those lines could be his epitaph. Or ours. ✭