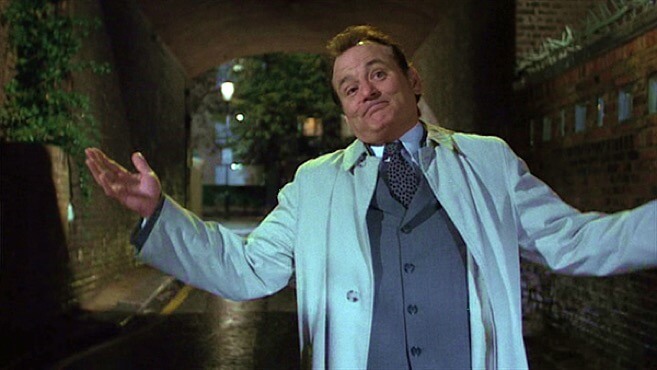 When Hollywood comes to the
street where you live

My neighbour, the poet Alan Jenkins, who lives just a few streets away, was lying awake at two in the morning last Thursday, when an odd thing happened. A light like a new star, brighter than the sun, came shining in his bedroom window.

Was it a UFO landing in the ghetto? Did the visitation presage a miraculous birth? The coming of a messiah? Had he won the National Lottery? Such were his half-waking, half-sleeping thoughts.

He looked out of the window and saw a generator parked in the street below and a cherry picker craning over the rooftops, and realised that the great white light at his window—in fact a multi-megawatt Sun-Ray spot—presaged an altogether different kind of miracle: a revival in the British film industry.

Meanwhile round the corner that afternoon, in the Mews where I live, we had been watching an actor, Bill Murray (Ghostbusters, Groundhog Day) hanging by a rope from a second floor balcony, spinning slowly round and round, while the director, Jon Amiel (Copycat, The Singing Detective), decided whether or not they needed another take.

“And look,” said another, unnecessarily, “he’s hanging six feet off the ground.”

The filming has continued for three nights now; gawpers have thinned out; but I can report that Bill Murray, or possibly someone else who looks like him, has on several occasions narrowly escaped hanging, mugging, and—quaintly—getting blown up by KGB hitmen hidden in a butcher’s delivery van.

The film that is being made is, we gather, a spy comedy with the working title, Watch That Man. According to the hard-to-follow account of the plot provided by the location manager, the Murray character believes all these narrow shaves are part of a role-playing game he has signed up for. But in fact it’s really all for real (that is to say, in the unreal world of the movie itself).

But this plot-summary may itself be disinformation. The star himself is said to be unhappy with the script, so, in the current Hollywood manner, he has brought his own scriptwriter with him to rewrite his lines as they go, a process that seems to have continued even as he was swinging by a rope from the house next door.

In the area of film production, it turns out that Britain has recently acquired a comparative advantage over the United States, born of the conjunction of skilled personnel, comparatively tractable trade unions and a favourable exchange rate. Huge numbers of production assistants, technicians, caterers, PR people and security men are deemed necessary to make a feature film, and currently it is cheaper to do it our side of the Atlantic. This, we are given to understand, is why Hollywood has come to Notting Hill—overmanned, overnight and on double overtime.

Location hunters combing west London for somewhere to film the mugging scene in Watch That Man (Ditch That Title, I’d say) chanced upon our little stretch of jerry-built Victorian cottages and pronounced it ideal: dank, sinister, real Jack-the-Ripper country. They weren’t to know that half the people who live in the street are involved in the film industry themselves. Nor that a Passport-to-Pimlico style of neighbourhood solidarity is in operation.

This is Notting Hill, after all: formerly the coast of Bohemia, now the domain of media folk with an eye for the main chance. Our local history is rich in filmic anecdote: the exteriors for Performance were shot nearby; the local washeteria is called My Beautiful Launderette (the director of the film, Stephen Frears, lives just round the corner). And our daily lives are a bit of a soap opera, what with the high density of minor celebrities and drug dealers and the occasional homicide.

So there has been parleying over the going rate for what film companies call “disruption”. And a number of the inhabitants of the street have been housed in hotels for the duration of the filming—children, pets and all; while some of the rest of us have been handsomely compensated. The gaffers and sparks who teem over our roofs are told to speak in whispers; their call-sheets have warnings attached explaining that the ruins are inhabited.

Between you and me, the film-makers have been responsible for some improvements. Fake ivy covers my neighbours’s hideous black polythene planters now. The set decorator spent ages matching the subtle shades of red and yellow and charcoal black that are found in the multi-coloured London brick that our houses are built from. And, truth be told, the street is noisier when the film crew is not here. It seems that having Bill Murray, or a lookalike, hanging from a window, escaping a mugging or being pursued by KGB assassins serves to discourage real-life public disorder in the neighbourhood, which can be raucous at weekends.

As I said, filming is nothing new here, though it is not always for purposes of entertainment. The area has been riddled with surveillance cameras since Operation Trident, the Met’s first big crack-down on drug dealing years ago. Where we live is ground zero of the surveillance society.

But that’s the kind of filming we don’t know about and never see. What has astonished me during the past few days, never having been on a film set, is the light pollution that making a feature film involves. It’s the same intense, saturated white light that attends celebrity walkabouts, the perimeter fences of high-security prisons and, it is reported, divine revelation. There are lights everywhere—on roofs, on cranes and in windows—and half a dozen generators to power them. Their eerie brilliance leaks into our dreams.

Today the crew are packing up and going. Brightness falls from the air. Somewhere in Elstree Studios a ghostly version of the street where we live, with plastic ivy and authentic-looking London brick, is being knocked up to shoot the interior scenes. Maybe they’ll be back to check on the colours in the masonry.

I don’t go to the cinema much, so I doubt if I’ll see the result of all this, or not until it turns up on TV, but the memory of the lights will linger. That Sun-Ray spot, the light that gave Alan Jenkins such a jolt—it’s really bright. Bright enough to dispel incipient seasonal affective disorder. I’m hoping they might leave it behind. One of those in my bathroom would greatly improve the experience of shaving in the morning. ★

Bill Murray’s movie was finally released under the title The Man Who Knew Too Little (the title a play on the Hitchcock film, The Man Who Knew Too Much). It went straight to TV. All this was in the years before the film Notting Hill put the seal on our part of town as London’s prime location for feature films and fashion shoots. Now film crews have taken up permanent residence.