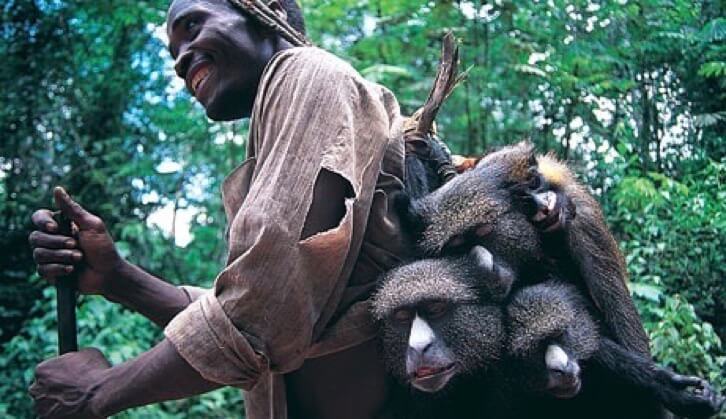 I’ve never eaten chimpanzee flesh. I expect you haven’t either. And as of this week there’s a new reason not to. Chimpanzees, it appears from new research in Africa, may be the original source of the Human Immunodeficiency Virus. A West African chimpanzee subspecies is likely the vector whereby the virus leapt the species barrier from simian to human, carried in blood from the victim of a hunter and sold for food in a village market in Gabon or Cameroon. Simian Immunodeficiency Virus (SIV), the non-human primate equivalent of HIV, is relatively benign: chimps don’t die from it. This means that the discovery could be helpful in the search for a vaccine. It could augur well for human health. Will it bring any benefit to chimpanzees, though? And what about the countries where chimps and other primates live, many of which are in the midst of never-ending civil war?

Such questions are linked by the chain of political and environmental decay afflicting much of the African continent. Chimps may not suffer as we do from the viral cull, but they—and gorillas too—are threatened by a greater scourge, the human appetite for meat, which is decimating the population of non-human primates in the Central African rainforest, their last great redoubt. Chimps, it hardly needs saying, are in far greater danger from us than we are from them. As important as finding a cure for AIDS in humans is finding some way of halting the threatened extinction of these creatures, our nearest animal relatives.

In some parts of Africa the bush meat trade is responsible for half of the meat that is sold in markets. A significant proportion of this is from primates of one kind or another. The trade is growing all the time, encouraged by the absence of effective government regulation, even in protected areas, and by the expansion of the timber trade. Logging is the most significant factor. Logging doesn’t just reduce the habitat available for forest-dwelling apes, it also opens up the forest for hunting and trade along logging roads from the interior. How to curb this growth in off-take from threatened primate populations taxes the brains of the most dedicated conservationists. 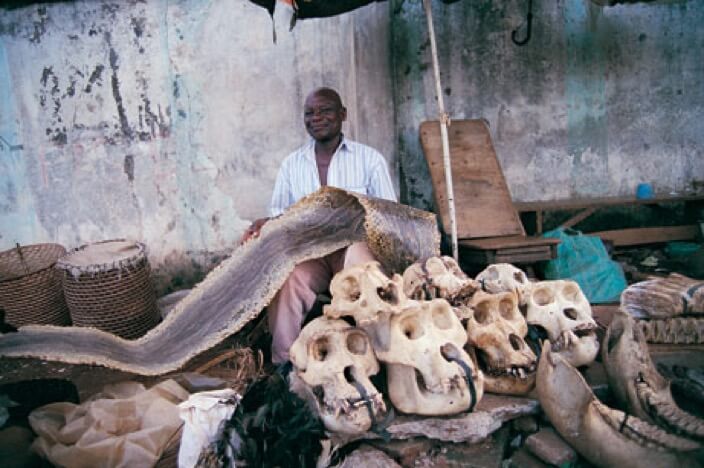 Ape skulls in the Democratic Republic of the Congo

Karl Ammann, a Kenya-based photographer, has spent the last ten years documenting the bush-meat trade and campaigning against it. Magazines in the West have shrunk from publishing his gruesome pictures of the carnage of apes and monkeys across the continent. But the pictures really should be published, because it is us, the inhabitants of countries outside Africa, who have the power to act. Like other conservationists in Africa, Ammann realises that it is unreasonable to expect people living in poverty and political insecurity to put the well-being of their animal neighbours high on their list of priorities. The strategy of conservationists has to be to try and bring local people some palpable benefit from the presence of non-human primates.

Usually it has been wildlife tourism that persuades indigenous communities to participate in the effort to conserve species and habitats. In Uganda, for example, the reserves where foreign visitors come to commune with mountain gorillas have proved to be a money-spinner. But Uganda is one of the few countries in the region that has a semblance of stable government. Who is going to go ape-watching in, say, the Democratic Republic of Congo? Only the brave. The present government of Congo cannot protect its own citizens, let alone tourists, and least of all its dwindling population of non-human primates.

Is there anything else that can be done? Could it be that the news about HIV in chimps will have some direct impact on the consumption of bush-meat? AIDS is certainly a big problem in Congo and other African countries, but for most Congolese it is just one among their many afflictions. And despite the newly established chimp connection, the principal means of transmission of HIV, as elsewhere, remains unprotected sex among humans. Even if there was greater public awareness in Central Africa concerning the possible danger of eating bush-meat (and, if the truth be told, the danger of contracting HIV this way is probably minimal) this still doesn’t mean that Congolese would renounce it. BSE has not stopped people in Britain eating beef.  And wider knowledge of the link might make things worse: chimps, rather than being hunted for food, could be slaughtered as a supposed danger to health.

The only immediate hope, Ammann and other conservationists stress, is to draw world attention to the crucial role in the slaughter of primates that is played by European and North American logging companies—and the consumers of African hardwood in the West and Japan. That means us. Once again, as in South-East Asia, as in Amazonia, loggers are fingered as the villains of an environmental catastrophe. But villains, even if they don’t know it, is what they are. And we are their accomplices. 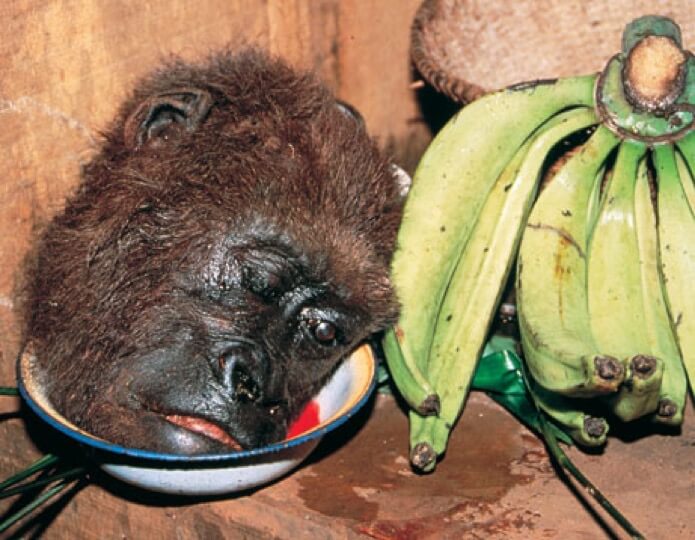 Eating apes is wrong. And so is buying hardwood from central African forests. It’s not so difficult to refrain from it: if you are tempted, just imagine you’re eating one of your primate relatives. Those iroko floorboards that you fancy for your living room are stained with the blood of bonobos. Every time you buy a pair of hardwood chopsticks you help kill a chimp. It could be that bad. It may be true that the timber trade in Central Africa serves to provide a livelihood for some of the poverty-stricken human inhabitants of the region, but this will not be for long. Such short-term, externally-driven extractive industries kill the golden goose, the bounty of the forest that has sustained human and animal life in the region for millennia.

Western governments seem reluctant to exert much effort to resolve Africa’s increasingly desperate civil wars, the wars that inhibit any form of sustainable development. But as private citizens we can at least limit our own role in the looting of the continent. If—and it’s a big “if”—the news about the origin of HIV manages to draw wider attention to the greater loss we face by abandoning African countries to the sway of savage capital and local predatory elites, then it might bring some good both to us and to our primate kin. This is the last chance we have to save the only surviving Old World rainforest and its irreplaceable native primate population.

So don’t buy African hardwood. Spend your money on something else. That way—touch wood—we may just be able to help keep the last of our big fellow primates alive in the wild. ★

There is no evidence that fear of AIDS has done anything to discourage sale or consumption of meat from primates in Africa, but in March 2003 it was reported that bush-meat vendors in Ouesso, in Sangha Region in the Republic of Congo, saw a sharp drop in sales due to consumer fears after an outbreak of haemorrhagic fever caused by the Ebola virus. Outbreaks of Ebola have been associated with eating meat from primates infected with the virus. The UN Information service, IRIN noted that this was producing new patterns of consumption, with people switching to fish, beef or chicken.