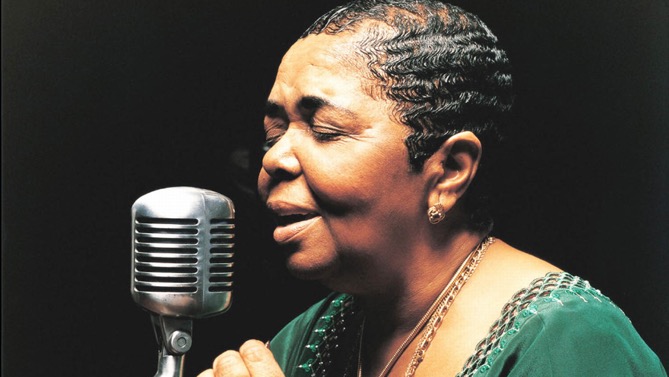 There are ten Cape Verde islands—fifteen if you count the very small ones. They lie a few hundred miles beyond the Canaries, on the threshold of Africa. Until last week I couldn’t have named one to save my life. But now the names Brava, Maio, Fogo, Sal and Mindelo have a sweet sound to my ear. And this is thanks to the voice of Cesaria Evora, whose concert in London last week was the high point of the Oris Jazz festival.

I have a couple of Cesaria Evora’s CDs in the house, the fruit of a late-night rummage some months ago through the World Music racks at Tower Records, the section marked “Lusophone” (Could that be like a saxophone?), but it took me till last week, on the eve of her concert, to look at the liner notes. They show a stout, black, regally plain lady of a certain age, standing around on beaches and in bars, barefoot, often with a drink in her hand. At the Queen Elizabeth Hall on Thursday she looked just as she does in the pictures, resolutely barefoot, taking an ostentatious break in mid-set for a cigarette, which she smoked, with some relish, on stage.

But if this picture suggests a rough-tongued, roistering chanteuse nothing could be further from the case. Cesaria Evora’s voice is a pure, soaring contralto; and her songs, or a good proportion of them, belong, we are told, to the genre called morna, minor-key laments for dead friends, lost loves and an abandoned homeland.

Bare rocks in a vast ocean

A way station in the Portuguese maritime empire, Cape Verde was uninhabited until the fifteenth century. Its population is the outcome of miscegenation between Portuguese seafarers and slaves brought from the mainland of Africa. These days, though, more than half of Cape Verdeans live abroad, in Portugal, or its former African colonies, or Rotterdam, or New England. Cesaria Evora herself lives mostly in Paris. (The stress, by the way, falls on the second syllable of “Cesaria”, and the first syllable of “Evora”). The songs she sings speak of the islands of her home country as unshining stars, bare rocks scattered in a vast ocean, places you must leave in order to see clearly, in order to live. Her bare feet, she has said, are  a reminder of where she comes from.

The Capverdean morna is reminiscent, initially, of Portuguese fado, the Lusitanian blues, as sung by its greatest exponent, Amália Rodriguez. Pervaded by regret and sorrow, fado has a claim to be the saddest music in the world. Someone is always lost at sea, someone inconsolably grief-stricken. The fado ensemble and the characteristic Cape Verdean band also have a number of instruments in common, notably the cavaquinho, a kind of ukulele. The songs Cesaria Evora sings, though, are not quite as grim as fado. They are elevated by a sweetness in the lyrics and enlivened by dance rhythms linked to those of Africa and Brazil.

“The land is poor but full of love,” she sings in “My Little Country”,

We have morna and coladera
We have batuque and funana.

In her performance examples of morna, coladera and the more upbeat batuque and funana follow close on one another. The charm and mystery of these names adds itself to those of the islands—to Fogo (Fire Island, so-called for its dormant volcano), to Sal (named for its salt beds), and to Brava, Maio and Mindelo. 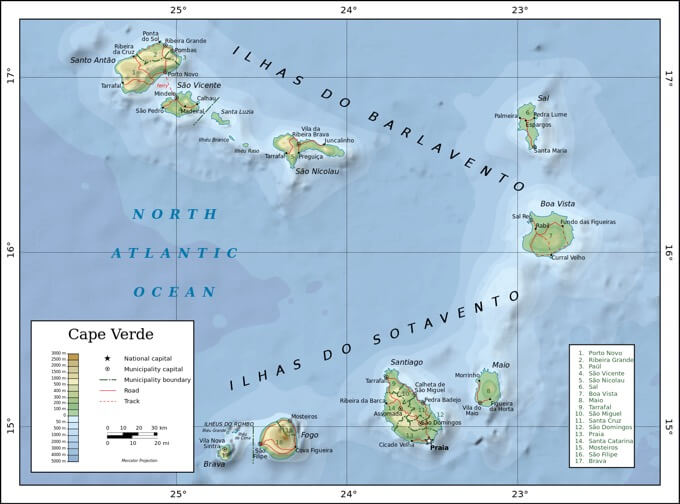 So much sodade, endless sodade

Aficionados of Brazilian popular music will find Cape Verdean rhythms familiar, though there is some doubt, according to the Rough Guide to World Music, whether these rhythms arrived via Brazil or direct from Africa. Batuque and funana certainly seize the limbs in the same way as the dance beats that come from Bahia, the heartland of Brazilian popular music. And the lyrics of Cape Verdean song have something in common with their Brazilian counterparts. The spirit of nostalgia and regret that kicks in when the dancing stops, the feeling that Brazilians call saudade, is strong in Cape Verdean music. In Brazilian Portuguese saudade starts as an oxymoron—sweet sorrow, ceaseless longing—and becomes a life-embracing tautology. So also, it seems, with sodade, as the word is rendered in Kriolu, the Cape Verdean dialect.

That might sound like more sodade than you were reckoning on. But take my word for it, it works when you hear it in Portuguese. Opera, in Rose Macaulay’s definition, is the medium in which things may be sung that are too foolish to say. Lusophone popular music may serve for us as the means of expression for thoughts too sweet or too bitter to be expressed in our own tongue. Its speciality is super-saturated melancholy, light-footed melancholy, melancholy that dances. British audiences are just beginning to discover the music of the lusophone world, Brazilian, Portuguese, Angolan and Capverdian; when they do they may find that it alters, not just their horizons, but their sensibility. ✭