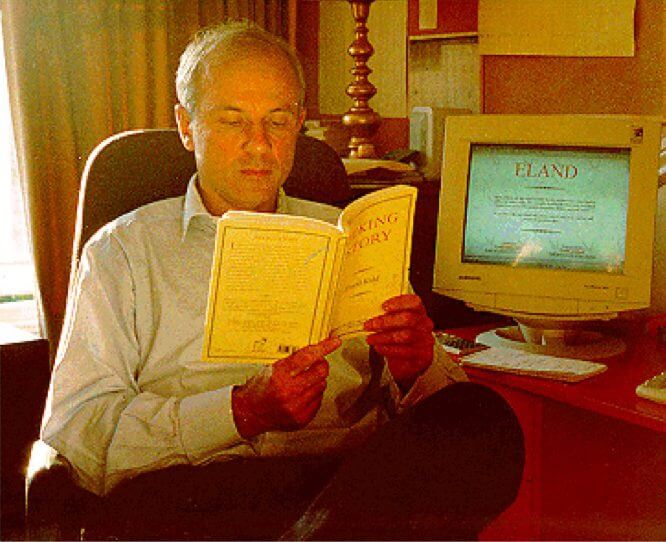 John Hatt, the publisher of  Eland Books, a traditionalist and fly-fishing fanatic, makes an unlikely cybernaut. Here is a man who never picks up the phone, and whose answering machine, until recently, greeted callers with an announcement that said: “This machine does not take messages. Please send a postcard.”

The only way to get Hatt on the phone—he won’t thank me for telling you this—is to send him a fax. Even then you half-expect his fax machine to tell you that it does not, as a matter of fact, accept faxes.

Yet now it turns out, in the mid-1990s, while the rest of us are still puzzling over how to parse an e-mail address, that he is first on the block with his own website. Soon no doubt, driven by the zeal of the reformed technophobe, he will have his own server, and finally his own internet search engine.

And this will be no bad thing, because his enterprise is in the cause of knowledge and good taste. For the past decade and a half Eland has reprinted only the books that Hatt thinks are incontrovertibly good. If you disagree—if you don’t like one of them—he will give you your money back. I wonder if there is any other publisher in the world prepared to make such a promise. I suspect not. Not only that, but the books are printed on decent paper without any annoying print-through, and with bindings sewn, not just glued, so they don’t immediately crumble, turn yellow or fall to bits. In an era of declining standards in the publishing industry, a time of corporate take-overs, of the cult of the best-seller and the dictatorship of the bottom line, Eland has been a tiny island of constancy, a one-man band where quality is the prime criterion.

Hatt started Eland in 1982, recognizing in the dawn of the travel writing boom that the best books in this genre had already been written. He was responsible for the rediscovery of one of the greatest of living travel writers, Norman Lewis. Lewis’s Naples ‘44, he says, is still his favourite of the forty books he has published (it’s mine, too, confirming my sense of his good judgment). Remarkably, every book Eland has put out is kept in print—with one exception. The exception is Richard Meinertzhagen’s Kenya Diary, a book written in the 1930s that was Hatt’s biggest seller. And the reason that he let it go out of print is typically quixotic: he came to believe that it wasn’t strictly true, that the diaries were doctored for publication to reflect better on their author. So he removed it from his list.

The Eland idea has been imitated by a number of mainstream publishers. Now, it seems, every half-baked travel narrative ever written is out in paperback, but Eland remains the cynosure in this field, harking back to an era when a publisher’s imprint was a reliable indication of the quality of a book. Hatt’s money-back guarantee has so far been taken up, he tells me (via e-mail, of course) by only three people .

The latest Eland titles, David Kidd’s Peking Story, an elegant memoir of the last days of the ancien régime in China, and Michaela Reid’s Ask Sir James, a biography of Queen Victoria’s doctor, appear later this month. You can see an excerpt from these (or any other Eland title) on the Eland website. Hatt hopes, of course, like other entrepreneurs in the electronic marketplace, that the new ubiquity of cheap information will give him direct access to his specialised, but widely distributed audience, enabling him to reach readers other media cannot touch. Wily angler that he is, he is lying in wait now for the first visitors to his new site and the resultant flow of orders from those hooked by the seductive prose that glitters there.

He also solicits suggestions for other titles to be included in the expanding Eland list. I’ve had no luck in this area myself. He has turned all my proposals down, so there are clearly limits to his good taste, but I’ll forgive him that.

Hatt is also the author of a quirky, but extremely useful travel guide, The Tropical Traveller, which tells you, among other things, where to hide your cash and passport in situations of potential danger (under an elastic bandage on the thigh), how to combat jet lag (drink only water) and why ultrasonic devices for repelling mosquitoes don’t work. In his new role as an electronic publisher he plans to make an updated edition of the book available online from the Eland site in the autumn. Here, among the flotsam and jetsam of the information ocean, is a real treasure trove ★

Around the time this piece was published John Hatt launched an internet travel site, www.cheapflights.com. Four years later, in 2000, at the height of the dot.com frenzy he sold it, becoming, at the age of fifty, one of Britain’s least youthful e-millionaires. Later he sold Eland to another small press, Sickle Moon; as of 2016 the Eland imprint is still going strong under the new owners.