Climbing Everest is tough work—but not as tough as all that. Nearly a thousand people have done it. You or I could do it—probably—if we were fit, unusually determined, had a few weeks to spare and were still the right side of fifty. We would also need $50,000, which is the minimum cost of joining a commercial expedition, with attendant guides and sherpas and oxygen, including a $10,000 fee paid to the Government of Nepal.

On such an expedition the chances are that we would reach the summit, but—here’s the catch—there is also a possibility, maybe as high as one in ten, that we would die in the attempt. In four decades a hundred and fifty people have died on the mountain, fifty Sherpa guides and porters and a hundred mountaineers. For that kind of money you might prefer somewhere safer, or at least less crowded.

The crowds on Everest mean that no one makes headlines anymore simply by climbing it (not even the redoubtable Göran Kropp, who in 1996 cycled from Sweden to Nepal, climbed the mountain without oxygen, solo, and then cycled home again), but it is still just possible to get in the news by falling off it or freezing to death. That same year a dozen climbers died, eight of them in a single, sudden storm. Most of them were paying amateurs, or their guides. Fixed ropes and high-tech gadgets were no protection against blizzards. One of the victims, the leader of a commercial expedition, was in radio contact with his wife in New Zealand as he lay dying, unreachable, close to the South summit. Another climber—who survived—was a New York socialite who arrived at Base Camp with two laptop computers and an expresso machine. Until the storm came she had Vogue delivered to her tent by courier.

Because it’s still there

The deaths on Everest triggered their own small avalanche of media attention, an avalanche that tended to obscure their predictability. Death in the mountains is normal. Last year more people died, unremarked, on Mont Blanc and on the Cuillin ridge in the isle of Skye than died on Everest in the same period—as they do every year (though fewer in proportion to the number of climbers). And that’s the point. If mountaineering were risk-free it would lose the sense of adventure that is a key part of it, for amateurs and professionals alike.

Everest, of course, is special. Not because it is a particularly challenging mountain, but because it is the highest. In George Mallory’s famous words, because it’s there. The fame of Everest has made it the target both of amateurs dreaming of the exploit of a lifetime and of professional climbers seeking commercial sponsorship. It has name recognition like no other. Lhotse, Nuptse and Pumori—adjacent peaks of equal or greater technical mountaineering interest—just don’t have the same cachet.

How much the pressure on guides to get their clients to the top contributes to a rising mortality rate is hard to assess, but it is clear that Everest has fallen victim to the tragedy of the commons: these days climbers may well have to queue for the ascent to the summit from the last bivouac at the South Col. And the South Col itself has become a rubbish dump, littered with empty oxygen cylinders, frozen human waste, and at least one corpse. 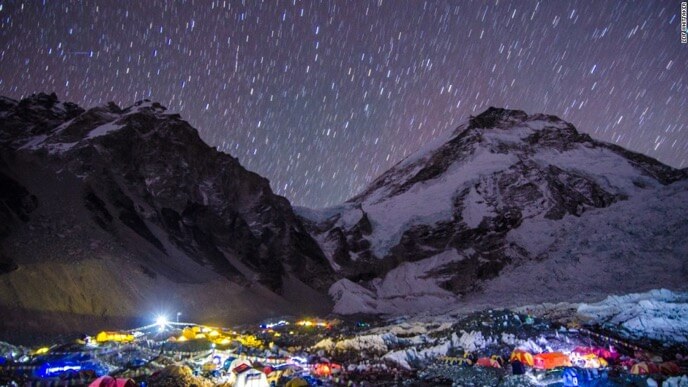 The death of chivalry

For Joe Simpson, the most shocking development is not so much the increase in mortality or the growth of environmental pollution, but the decline of the ethos of mountaineering. In 1992, he records, a climber was left to die thirty yards from a group of tents on the South Col. Other climbers, believing he was beyond help, did not take the risk of bringing him comfort as he lay dying.

A year or two later a group of Japanese climbers on their way to the summit came across two members of an Indian party who had been benighted on the descent. They, too, were at the point of death. The Japanese climbers stepped over them and continued climbing. On their return the Indians were dead. One of the Japanese was reported in the Financial Times as saying “above eight thousand metres is not a place where people can afford morality”.

For Simpson, himself a Himalayan climber of well-merited renown, author of the mountaineering classic, Touching the Void, such a sentiment is the opposite of the truth. For him climbing is a moral activity, a form of heroic humanism where altitude and danger should bring out the best, not the worst in human beings. Dark Shadows Falling takes the form of an extended reflection on recent climbing accidents, such as those on Everest in 1996. Simpson’s subject, however, is not so much the death of individual climbers as the death of chivalric values.

Dark Shadows Falling is an uneven book, sometimes taking on the tone of a long, rambling base-camp conversation. The issues it raises, though, are fundamental.

Of the climbers and trekkers who flock to the Himalayas, Simpson writes:

They have served no apprenticeship in the hills, have learned nothing of the ethos of behaviour that governs any true mountain lover. Many of them show no respect for the mountains, nor for the people who struggle to live among them.

This is the authentic voice of the mountaineering tradition, a tradition that is abandoned at our peril. ★