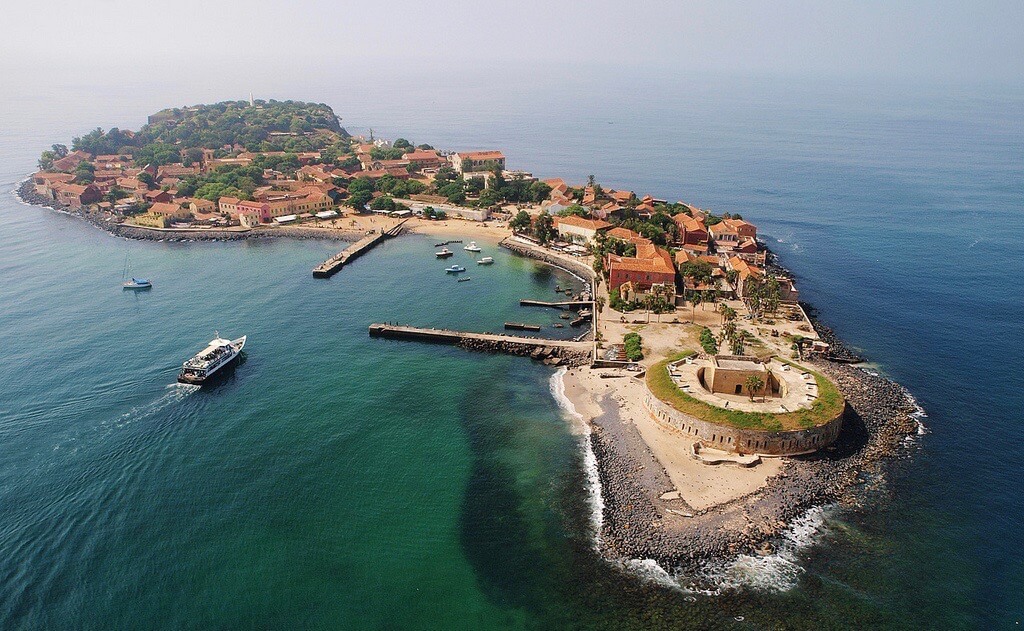 The island of Gorée, two miles offshore from Dakar in Senegal, has been called Africa’s Buchenwald. The first of a string of fortresses built by European powers on the West African coast in the seventeenth century, it was for a short while the principal entrepôt of the slave trade, the point of no return for many thousands of Africans traded from the interior and shipped to the Americas by Portuguese, Dutch, French and English slave traders.

After the abolition of the slave trade Gorée was superseded as a port by Dakar and the elegant colonial houses on the island fell into decay. More recently they have been partially restored; the island becoming a shrine to the history of the Atlantic Passage. And its inhabitants have become servants of the tourist trade.

A Senegalese army colonel I met at a conference in Dakar last week recommended a trip there pour se relâcher:

“Is it relaxing to contemplate the history of slavery?” I enquired.

“Well,” said the Colonel, “it’s like going to see a horror film. You do it to remind yourself you are safe.”

He was just back from Casamance, the southernmost province of Senegal, where a long-standing insurgency against the government has been intensifying for the past few months. In Dakar newspapers were full of pictures of landmine victims, and alleged rebels gunned down by the army. The Colonel’s mind was perhaps on these more recent horrors, rather than those of the slave trade. And he hadn’t caught wind of the current scandal on Gorée.

Trouble on the island

The colonel was right about the relaxing atmosphere. For a visitor Gorée is one of the pleasantest places imaginable. With its colonial houses, trailing bougainvillea, baobab trees, sea breezes and narrow, shady streets, the island is a favourite day trip both for foreigners and Dakarois. Children dive for coins in the harbour as the ferry arrives. There are a couple of museums, including an historical museum in the old fort, which even-handedly represents the African involvement in the slave trade as well as that of Europeans. There’s a sheltered beach, and no cars.

The terracotta slave house, where captives were held pending shipment to the Caribbean and American colonies, has been exquisitely restored, almost belying its original purpose, despite the stories of past cruelties that are recounted eloquently by its guardian, Joseph N’Diaye. There are only half-a-dozen hotel rooms on Gorée; so after the day-trippers leave in the evening the island is returned to its inhabitants and a handful of foreign residents.

But some of these foreign residents are worried. On October 22 an article appeared in the French newspaper Libération, written by a Parisian academic named Jean Gortain, alleging that the island was the haunt of European paedophiles.

“On this island,” he wrote, “where one of the most terrible pages of the history of the planet was written, within a stone’s throw of the Slave House, white people are using black children for their perverse pleasures.”

The author wrote that children and adolescents of both sexes on Gorée were being subjected to what he called a modern form of slavery, that the people of the island had been cowed into silence by foreign money and high-level corruption. He called on the Senegalese authorities to act.

The Goréens that I spoke to on the ferry last Thursday did not seem to have been cowed into silence. They talked of little else. One of them, a civil servant who commuted each day to the mainland, was carrying a copy of the offending article, which he gave me to read, assuring me that the matter had been raised that day by the President in cabinet. It was a shocking business, he said. Of course everyone on the island knew about it. And there was a drug problem too.

On Gorée itself, some of the young men who act as tourist guides on the island were gathered by the fort. The civil servant came with me; we showed them the article. They studied it with care. Yes, they said, of course they knew all about this too. There was a foreign homosexual living with a Senegalese man in that house over there by the harbour.

“C’est pas ça,” answered one of the guides, a dread-locked thirty-year-old. “That is not the problem here.”

“The problem is that there is no work. And no education. And nothing for young people to do. And no way for us to earn a living.”

“And the problem is that the authorities are corrupt and take bribes. And the government does nothing. And so we depend on you, the tourists, to live. ”

I persevered. Were there also children involved in sex tourism?

“Des jeunes hommes,” he said. “Young men. And some girls. But children? I don’t know about that. It is on the mainland that sort of thing happens.”

Sex tourism in one form or another is present all down the West African coast.  After a military coup in the Gambia, a few years ago, the incoming head of state was moved to declare that the world would have to learn that, in his words, “Gambian men are not sex machines” (A statement liable to have the opposite effect, of course, ensuring that, in future, this is what the name of the country will most readily bring to mind.)

And sexual exploitation is not the preserve of foreigners. In Senegal and other countries in the region girls are often married off at the age of twelve or thirteen. From a global human rights perspective this clearly constitutes abuse. Either way, it would not, of course, make involvement of foreign tourists in child prostitution any less objectionable.

Gorée’s historic role in the transatlantic slave trade may suggest a comparison between this ancient evil and the new nastiness, but what is alleged in the Libération article is a long way from slavery. And the comparison with the slave trade might be regarded as frivolous when real slavery or slave-like practices still exist in Africa—as, for example, in Mauretania, just to the north of Senegal, and in Sudan, on the other side of the continent.

The tour guides agreed that this was so. And the man I met on the ferry agreed too. It was a matter on which everyone I spoke with seemed to agree. So we went our separate ways. The guides to find more visitors to whom they could explain the island’s grim history, the man on the ferry to his home by the harbour, and me to the island’s only hotel, hoping no one would mistake me for a sex tourist.  ✭