Reinhold Aman was a scholar of bad language. The poison-pen letters he sent landed him in jail. Now he's back, with a vengeance. 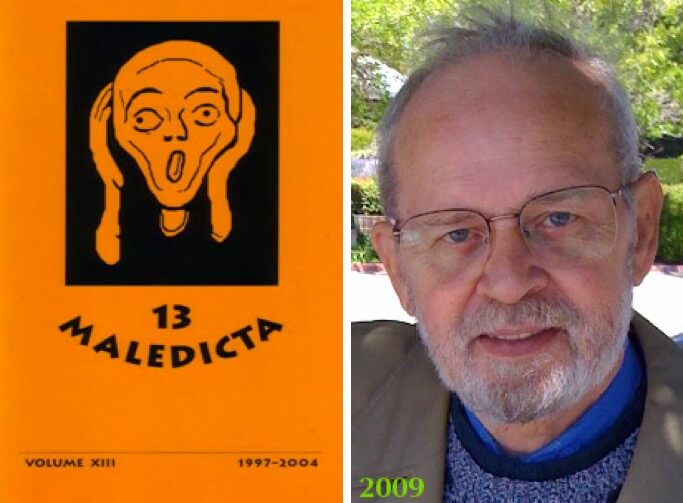 Along with the circulars and invoices and renewal notices in each day’s post—the pleas, demands, rebukes and invitations from persons known and unknown (including, just the other day, an envelope with the following legend on the back, Do not throw this letter away unopened—if you do so a capsule of water will break, spilling on a dehydrated boa constrictor, which will crawl out of the envelope and crush you to death)— along, as I say, with the junk mail and joke mail and fan mail and hate mail and out-and-out blackmail, there used to arrive, from time to time, from Waukesha, Wisconsin, a package containing the latest issue of a distinctive-looking periodical, Maledicta, subtitled “The International Journal of Verbal Aggression”.

The tone hovered between cod-scholarship and scatalogical glee, particularly when it came to the frequent contributions by the editor himself, Dr Reinhold Aman, a German-born academic in the heart of America. Peer review, one felt, probably did not play much part in the selection of articles in Maledicta. And Dr Aman’s renewal notices were masterpieces of not-so-oblique threat.

“If publication should be delayed,” ran one of them, “because of tribulations besetting the Editor, do not bug him with ‘Is it out yet?’”

I didn’t bug Dr Aman, but the wait was long. From 1990 until a couple of months ago. For five years Maledicta did not arrive at all. Had I failed to renew my subscription? Or was it the Editor’s unspecified tribulations that caused this gap of years? I can’t say I lost sleep over it. There’s sufficient verbal aggression in everyday life—road rage, gangsta rap etc—without yearning for more to come in the post.

In the meantime, however, Dr Aman was certainly losing sleep: he was in prison, sharing a cell with a Hell’s Angel. His offence? Sending threatening letters through the mail to his wife. Oh—and to her lawyer too. And then—final mistake—to the  judge who found against him in their divorce.

Thus it happened that one morning Dr Aman opened the door to find, not the mailman, but seven armed FBI agents come to take him away. He was taken to a maximum-security prison, shackled and cuffed, chained to six murderers, tried and finally sentenced to 27 months in a Californian jail. Here he found himself among the very jailbirds and junkies and screws whose speech he had been chronicling, inter alia, for years, in the pages of his quasi-scholarly periodical.

Dr Aman’s postcards to his wife were certainly very nasty: pasted-up cut-outs from newspaper headlines spelling out threatening messages, “Man Kills Ex-wife”, “Estranged Wife Is Found Slain in Her Home”. But the punitive nature of his sentence perhaps owed something to a pamphlet he disseminated entitled Legal Slimebags of Wisconsin. Concerning this publication I will say no more, for fear of ending up, like Dr Aman, bunking with Hell’s Angels in a US penitentiary.

So Dr Aman served his time, or fifteen months of it. And now he is back, five years late, with Volume 11 of Maledicta (1990-95), featuring articles on the bowdlerization of William Faulkner, banned obscene letter combinations on license plates, insults in Papua New Guinea and the killer come-backs that stand-up comics use to deal with hecklers. He has also published a book, Hillary Clinton’s Pen Pal: A Guide to Life and Lingo in Federal Prison, dedicated to his former fellow inmates, which combines lexicography and satirical abuse in the manner of Ambrose Bierce’s Devil’s Dictionary. The book is a sustained, ironic attack on the American legal profession and the federal prison system of which he is an alumnus.

“Although I am now completely rehabilitated,” Dr Aman writes, “and oozing with contrition, I find our system of justice strange…”

Under the guise of advice to Mrs Clinton—who he figures will soon be serving time herself as a result of the Whitewater enquiry—Dr Aman lampoons judges and lawyers—including his own—in terms that make you wonder what on earth he can have said in the now-banned Legal Slimebags of Wisconsin that could have been worse.

Juvenal he is not, but Dr Aman is a past master of low abuse—ad hominem, ad feminam (and sometimes, it must be said, ad nauseam). Although participant observation in malediction seems to have been his downfall, he now promises a further account of his time in prison, to be published in the coming year. Meanwhile the next issue of Maledicta (featuring articles on Dutch Latrinalia and Nasty Rock Band Names) is due out in July. Editorial tribulations permitting, of course. ★