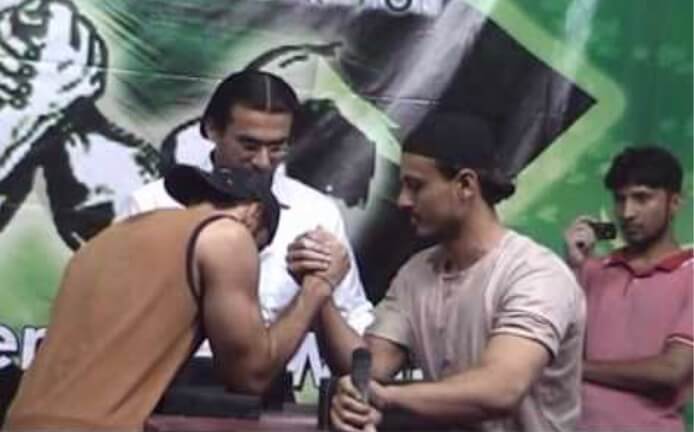 In Baluchistan twenty-five years ago, in Pakistan’s wild west—where five nuclear devices were detonated last week—I and my school-friend Khalid found ourselves stranded for a day in a town called Loralei. While Khalid was off looking for someone who could repair a tyre on our vehicle I waited at a cafe table in the main street. Here I was challenged to an arm-wrestling contest by a one-eyed man named Tariq.

Lorelei is in Pakistan’s lawless zone, close to the Afghan border. Arm-wrestling has a claim to be the national sport of Pakistan—after cricket, at least. (They don’t play much cricket in Baluchistan.) In Baluch culture machismo and blood feuds figure large. The forfeit for defeat in a contest of strength was unclear. The arm-wrestling champion of Loralei—as he was said to be—had an impressive physique. But he had clearly been smoking bhang, which had adversely affected his concentration. We set to, palm to palm, in the locked, tensed posture of arm-wrestlers, and held steady, wavering in neither direction.

Perhaps my opponent was toying with me. At any rate, a self-appointed umpire quickly stepped in and announced it was a draw. Everyone’s honour was satisfied. When Khalid returned with the car tyre repaired we continued amicably on our journey to his home in the Punjab.

Today the powers of the subcontinent are locked in a nuclear wrestling match with each other. Would that the spirit of the draw, of restraint, of deterrence, of mutually assured destruction, might rule in relations between India and Pakistan now that they know they can destroy each others’ centres of population just by raising a finger and pressing a button. Instead the two countries have been celebrating their accession to nuclear power with fireworks and street demonstrations. Both countries already have huge arsenals of conventional weapons. Both can see what the effect has been of long-running wars on neighbouring countries such as Afghanistan and Sri Lanka. And both have arms industries of their own that have fuelled these conflicts.

On a subsequent visit to the region, in 1993, I visited the arms bazaars in the north of Pakistan, towards the Khyber Pass, and witnessed the devastation caused by landmines in Afghanistan. The journey from the Ordnance factories at Wah Cantonment, an hour out of the capital, Islamabad, where Pakistan’s nuclear weapons are made, to the border area is a Via Dolorosa of the arms industry. At Wah, I reported, the factories employ 40,000 workers and manufacture half a billion dollars worth of armaments annually: small arms, artillery, landmines, the whole horror show.

Further up the road, in the tribal areas of the north-west frontier province, there is a long-established free market in weaponry. In Jam Kor Khono, just outside the city limits of Peshawar, beyond a sign that says “Foreigners Are Not Permitted”, there are rows of glass-fronted stores with racks of automatic rifles, anti-tank rockets, swordsticks, pencil guns and mines. Deeper in the tribal areas, at Miranshah and Landi Kotal, if you know who to ask, you can find surface-to-air missiles for sale, remnants of the arsenals supplied to the Afghan Mujaheddin by the CIA in the eighties.

The arms bazaars of the north-west frontier have become a global symbol of the unregulated traffic in weapons—they feature in the opening credits of the new Bond film, Tomorrow Never Dies. Here in the Af-Pak border zone, the global proliferation of all kinds of weapon is all too visible. These are the weapons that have brought ruin to countries such as Afghanistan, where collapsing state structures have removed all restraint. The proximity of this hi-tech free-for-all to the nuclear assembly plant at Wah is a reminder of the precariousness of arms control. Nuclear weapons can do a lot of damage fast, but over time conventional arms can do a lot too. Landmines are an example. Afghanistan is one of the most landmine-infested countries in the world. Not for nothing has the human rights researcher, Ken Anderson, called anti-personnel mines a weapon of mass destruction in slow motion.

Western countries are hardly in a position to lecture anyone on this subject. In Britain our arms industry is the fourth largest in the world. Our Nuclear Non-Proliferation Treaty is a club for those countries that already know their weapons will work. The countries that ought to be lecturing India and Pakistan about nukes are those that do not possess these weapons, but that are already experiencing the bitter effects of global arms proliferation. Relatively powerless as they may be individually in the counsels of the world, the time must surely come that the governments of these countries—Afghanistan, Cambodia, Somalia, Angola—cease to be abject consumers and condemn the trade that brings their citizens such misery.

If I should have another occasion to meet Tariq, the one-eyed arm-wrestler of Loralei, I hope he will agree. He’ll be a father and a grandfather by now, I dare say. That’s if he has not fallen victim to the conflicts that have befallen Baluchistan and the North-West frontier zone since Khalid and myself travelled there. Let us hope Tariq and his children and his children’s children do not have to live with the everyday threat of destruction—or of radiation sickness—as so many will if the nuclear weapons in the region are ever used. ★