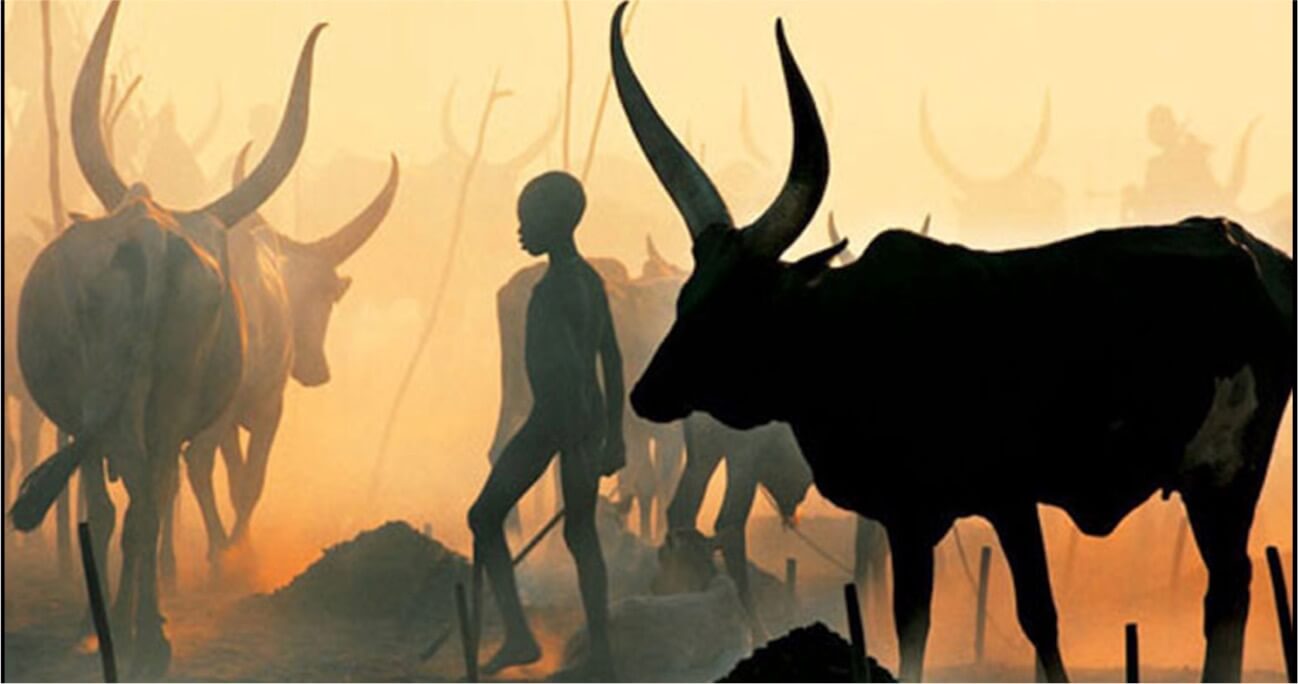 I wonder how my cow is getting on. Her name is Nyang—the crocodile—a reference to the dark-brown brindled colour of her hide. I bought her at auction in 1993, when she was a yearling, and left her in the care of a man named Ater. If things are going right for Ater and his kin this cow of mine should be at pasture with the rest of the family herds on the floodplain of the Upper Nile, in South Sudan, in the territory of Ater’s people, the Dinka.

For the Dinka—at least those who dwell in rural areas—cattle are the main event: Dinka cattle-keepers are transhumant, moving back and forth from their villages, following seasonal variations in water level and the availability of grazing. In Southern Sudan the rains have started: the rivers are rising; herds will be on the move. At this time of year the cattle are still gaunt from the dry season; when the rains come, though, and new grass springs up, they will be leaping in the pasture.

My Nyang should have calved twice by now: the first calf will be mine; the second will belong to Ater. Then the third will be mine and the fourth will be his. And so on. In due course I should be able to contribute from my nascent herd to someone’s future brideprice (Dinka marry for cattle, which are exchanged between families, those on the groom’s side giving livestock to those on the bride’s). In the meantime Ater, or his children, have the usufruct of all of them, the few pints of milk a day that my cow produces, and that, in due course, her female offspring will produce.

Dinka cattle are the great-horned descendants of the now extinct wild cow of the Nile valley, interbred with lateral-horned zebu introduced from Asia in the stone age, when the great epic of human domestication of animals began. With their humps and horns they look more like the Brahmans you would see at a South Fork rodeo—or on the Gangetic Plain—than the fat, square-backed Herefords, Guernseys and Jerseys that graze in British fields, careless of the threat of immolation that has been hanging over them since the BSE scare began.

The lives of Dinka cattle are a far cry from those of a European dairy herd, as different as my life is from Ater’s. No offal or fishmeal in their diet, no suckling calf ripped from the udder to make way for a milking machine, and no calf raised in darkness to make Wienerschnitzel for some heartless gourmand. There’s no BSE in Sudan either.

There is, though, the constant risk of Rinderpest, East Coast Fever and Contagious Bovine Pleuronoma. And cattle thieves. For all I know, my cow Nyang may have succumbed to one of these dangers. But it will not be for lack of good husbandry: Dinka cattle are tended from dawn till dusk, their coats cleaned with wood ash to discourage ticks, their dung swept away each morning and burned each night to keep mosquitoes at bay. In the crowded cattle-camps, men and boys sleep alongside the family herds to protect them from wild animals. And, traditionally, when young men go courting in the dry season, they take their favourite ox with them, singing its praises as they go.

A full-grown Dinka song-ox is an impressive sight. Selected for size and strength and the conformation of colours on its hide, it will be castrated as a yearling, its horns cut on the oblique so that they grow into asymmetrical curves, then pierced, so buffalo-tail tassels can be hung from them. At dusk in the dry season youths and their oxen promenade at the edge of the cattle camp, near the family hearths of the girls they are courting, singing songs of praise, say, for their Makuac (so-called because he is spotted like kuac, the leopard) or their Makuei (parti-coloured, like kuei, the fish eagle), or any of dozens of other, differently patterned animals.

The flanks of his ox, a singer may proclaim, with their white lightning flashes and play of light and shade, are like the colour of rain in a thunderstorm. Sometimes his song will be about the rain itself, about the long wait in the dry season for rain to come:

My red-nosed Makuei is suffering
Until rains fall. And I am suffering too.
That’s how we are, Makuac.
I love Makuei. Makuei loves me…

In praising the ox—and thus, indirectly, its owner—Dinka sung poetry deploys innumerable metaphors for colour-patterns, and scores of subtle distinctions between variations of ring-straked and spotted and piebald. Dinka men and women take these colour-pattern names for themselves: Makuac, in the fragment above, is a man, the singer’s friend; while Makuei is his ox. The identities of men and cattle and wild creatures are linked at the level of metaphor, as they are in the ecology of everyday life on the great flood plain of Southern Sudan.

I had a ox too, at one time—Markur. He was a gift from the chief in the village where I lived. But he was swept away by the raids and counter-raids that have been spawned by the civil war in Sudan. The war has continued for thirteen years now. Rebel armies in the south have fought one northern government after another. They have fought each other too. The north of Sudan is Muslim and largely Arab; the South is neither. So it is a war, among other things, for cultural survival.

In this struggle the cattle culture and pastoral poetry of the Dinka—and that of the numerous other peoples of the South—has its part to play. These days Dinka composers sing of guns as well as cows and rain, but the social language of cattle exchange, and the poetry of oxen, bulls and cows—the bovine idiom, as it has been called—will remain paramount as long as their livelihood depends on cattle, that is to say, well into the future. My cow Nyang and her offspring—the heifers and song-oxen of tomorrow—are an investment in that future. ★