It’s the late 1990s and the peoples’ car is back.
With a TDI engine and six-speaker stereo 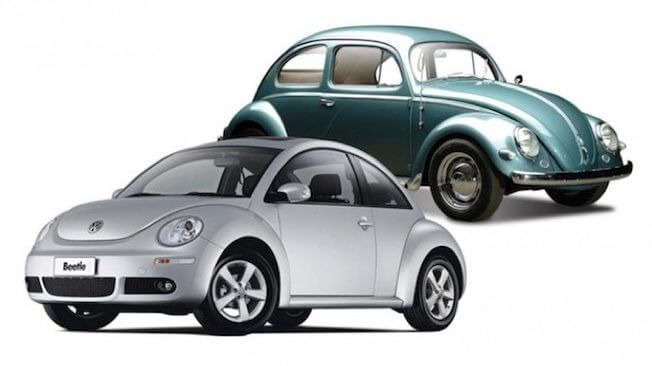 You can’t drive my car. I’m sorry, I don’t own one. It’s not a question of principle. I won’t turn down a ride in your Roller, your Escort, your Lada. I’ll drive if you like. I’ll be your chauffeur. But I’m really not interested in cars per se, short of getting from A to B. (Which is, of course, increasingly difficult, because of all the other cars doing the same thing.)

When it comes to conversations about horsepower or compression ratios—when the talk turns to torque—I find myself teetering on the brink of a narcoleptic trance. (On second thoughts, maybe I’d better not drive.)  And sometimes, I admit, I find myself thinking—without the least trace of self-righteousness, of course—that at least it’s not me adding to greenhouse gases or helping choke up the M25.

If I had a sticker on my bumper—if I had a car, that is—it might say this: “Don’t blame me. I voted Green.”

You make my heart sing

It was not always so. And when I saw an ad this week for the newly-minted Volkswagen Beetle, my heart leapt. It sang.

The VW Beetle! That’s not a car; it’s an era, a way of life. The Beetle, in its rambunctious simplicity, reminds us of better times, an age of innocence, when owning a car made you feel free, when the Esso sign meant happy motoring (actually that was before my time). It harks back to an era before the internal combustion engine became a source of unease and guilt, before we understood the price that has to be paid for the use of fossil fuel, before we had to face the fact that the Volkswagen factory in Germany used slave labour during the 1939-1945 war.

There are other canonical motor vehicles, of course. For those who were born earlier, or later, their ur-car may be a Mini Minor, or a Citroen Deux Chevaux, or a Ford Escort. But, for me, coming of age in the 1970s, it was a Beetle. It was the first car I owned. And probably the last. I drove in it to Spain. To Afghanistan. Half way off a cliff. Twenty thousand miles across two continents. With barely a puncture.

The Beetle’s engine, famously, was located in the back, where other cars had a boot (a trunk, that is, if you are reading this in the United States, where the new Beetle goes on sale this month.) On the old Beetle the engine was air-cooled; there was no radiator. There was almost nothing to go wrong. And if it did go wrong you could take the engine out to get it fixed just by unscrewing the four bolts that attached it to the chassis.

“Just four bolts?” I hear you say. “So that would be handy for car thieves?”

Car thieves? What are you talking about? There was peace and love back then. That was what Beetle-owners believed. Like the cars themselves, we were different. We gave lifts to hitchhikers. We waved when we passed each other on the highway. No one felt road rage then, not in a Beetle.

The very shape of the Beetle was special, both inside and out. It was curvy where other cars were straight. Like a hat on wheels. Or a boat on its back. The Beetle curved in all dimensions. It floated in water. (I tried this once with mine—inadvertently. It did float, For a while, at least.) Beetles may actually have been designed to fly: their wings were so generously proportioned.

I felt about my Beetle the way Neil Young felt about his station wagon: “Long may you run,” goes the song,

With your chrome heart shining in the sun

Long may you run.

But I betrayed my Beetle in the end. Left it to rust in a street in East London; then consigned it to the knacker’s yard, where it was crushed, I guess, into a cube of steel, its lovely curves reduced to rectilinearity, like any other defunct car. I still feel guilty about that.

The anatomy of the new Beetle

And now there’s a new Beetle. This version, according to the press handout, is an “upmarket, lifestyle vehicle”. The engine is now in the front, like other cars, but its heart, the press handout assures us, “is in the same place.”

The car is powered by a 115 bhp four-cylinder engine, or by a TDI diesel—whatever that is. It has a six-speaker stereo and a central locking system. And power windows and front seats that can be heated. And it won’t smell like the original Beetles did—a blend of plastic upholstery, gasoline and trapped grass from the air intake. This is because it also has, according to the specification, a pollen filter.

A pollen filter. How the humble are exalted! But is it still a Beetle, really? True, it still looks more like a beached boat than a car, just as the original did. But inside, frankly, it’s a Golf. A post-modern Golf, with lavender lights on the dashboard and little nods to the original Beetle, including vinyl handstraps and a flower vase on the dashboard. The new car is powerful. It’s comfortable. Its chic. Everything that the original was not. (If you’re thinking you’ll be able to salvage spare parts from your old Beetle, think again; under the hood the whole thing is quite different.)

I’ve not actually laid eyes on one of these new-fangled, fast-flying vehicles yet. The new Beetle will soon be on sale in the US; but in Britain we’ll have to wait till next year. Yes, I can see it’s not a real Beetle. And I’m sorry it doesn’t run on, say, solar power. I can’t promise, though, that when I get the chance—just for old times’ sake—I won’t be taking it for a test run.★