The new food writing could ruin your appetite 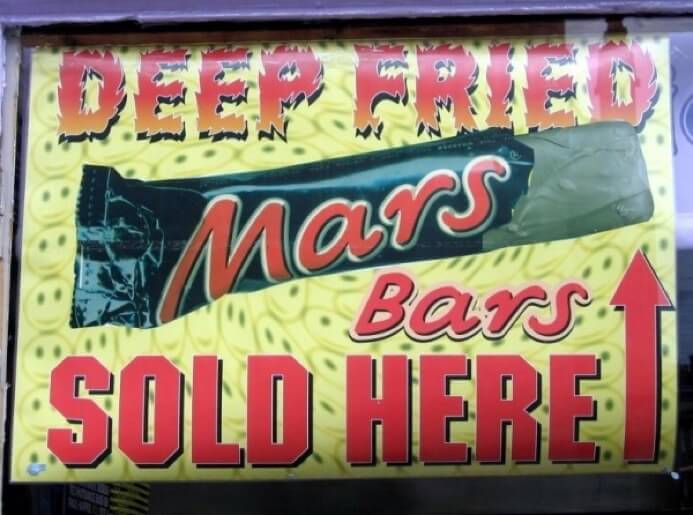 When it comes to food no one would call me choosy. Bread and dripping, rice and beans, chitlins, grits, asida, biltong, fu-fu, tofu, quorn, pease pudding—you cook it, I’ll eat it. I’m sure I’ll like it. The names such foodstuffs bear are a pleasure in themselves.

And rest assured—should you be snacking as you read this—I’ve no quarrel with people eating as they work, or play. Especially if it’s chocolate. Reading and chocolate have a special relationship: both are brain-stimulating, comforts for the lonely, comradely stand-ins for love. As Brecht wrote (though not in this connection), Erst das Fressen, dann die Moral—first grub, then ethics.

So I didn’t turn a hair—I’m sure you didn’t either— when I first heard someone ask for a deep-fried Mars Bars in a fish-and-chip shop. It’s a delicacy that’s already a bit vieux jeux north of the Humber-Tees line, that land from whence so many culinary delights have come, starting with haggis, black sausage and oat porridge. As part of a high fat, high cholesterol diet I have no doubt that the deep-fried Mars Bar has a place of honour, nutritious and delicious (and in truth, not so distant from pain-au-chocolat.)

What makes me queasy, though, is all this writing about eating. The language of restaurant reviews can be stomach-churning: a kind of baby-talk, gaseous, pernickety, self-indulgent, filled with swooning accounts of dishes that are perpetually moist and melting, or tender and tempting: those amuse-gueules that so tickled the critic’s palate, the dessert that delighted that of his or her companion (restaurant reviewers, unlike book or theatre or film reviewers, always come with companions). And all for a very reasonable £135 for two, without wine.

Oh most reasonable, I’d say. Wouldn’t you? A snip, really. For restaurant critics, it seems, flirts of the food industry as they are, all food is comfort food. Usually very pricey comfort food. Surely—one feels driven to point out—an important factor in all this is how hungry you are. The hungrier you are, generally speaking, the better food tastes. Do any of these gourmands know what it is like to go without food for more than a couple of hours?

Eat up your greens, I want to say to them—as my grandmother used to say to us, to her fussy grandchildren—think of the starving children in Africa.

Roast doormice with syrup of poppies

The buzz in the book business says food is the coming thing. A forthcoming novel by John Lanchester, The Debt to Pleasure, is set to do for the sense of taste what Patrick Süsskind’s Perfume did for smell, that is to say, give it a highbrow twist and make 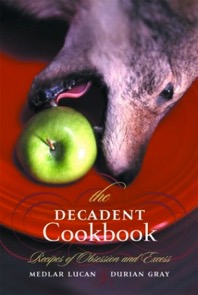 its publishers fat and happy. And meanwhile, from the gothic publisher Dedalus, comes The Decadent Cookbook, written by a pseudonymous pair of epicures named Medlar Lucan and Durian Gray.

This is a collection of recipes so revolting that no reasonable person could imagine using them, a walk on the wild side for those who scorn not only the prohibitions of Leviticus but also the dictates of good health and kindness to animals—those for whom larks’ tongues in aspic are disappointingly plain fare. There are recipes here for roast doormice with syrup of poppies, for sucking pig with garden pests, for Tasmanian wolf and panda paw, for aye-aye meatloaf and porpoise sausage. There is a section on the special pleasure of eating endangered species. The book is a spoof of course, but a spoof that its slyly pseudonymous authors seem to take a suspicious pleasure in.

Also due to be published shortly is an issue of Granta dedicated to food. In its pages the novelist Sean French braves opprobrium from conservationists by eating whale. Raw, that is, with soy sauce. Just a few strips of flesh, you understand, but whale all the same. With roast puffin to follow. Sean French is the author of an affecting novel about a monkey. Yet it seems he might not draw the line at a lightly grilled primate for supper. I’m sure he’ll be giving The Decadent Cookbook pride of place in his kitchen. That’s if he’s not out catching the new wave of food writing. How about fricassée of albatross this time? There could be an epic poem in it. ★