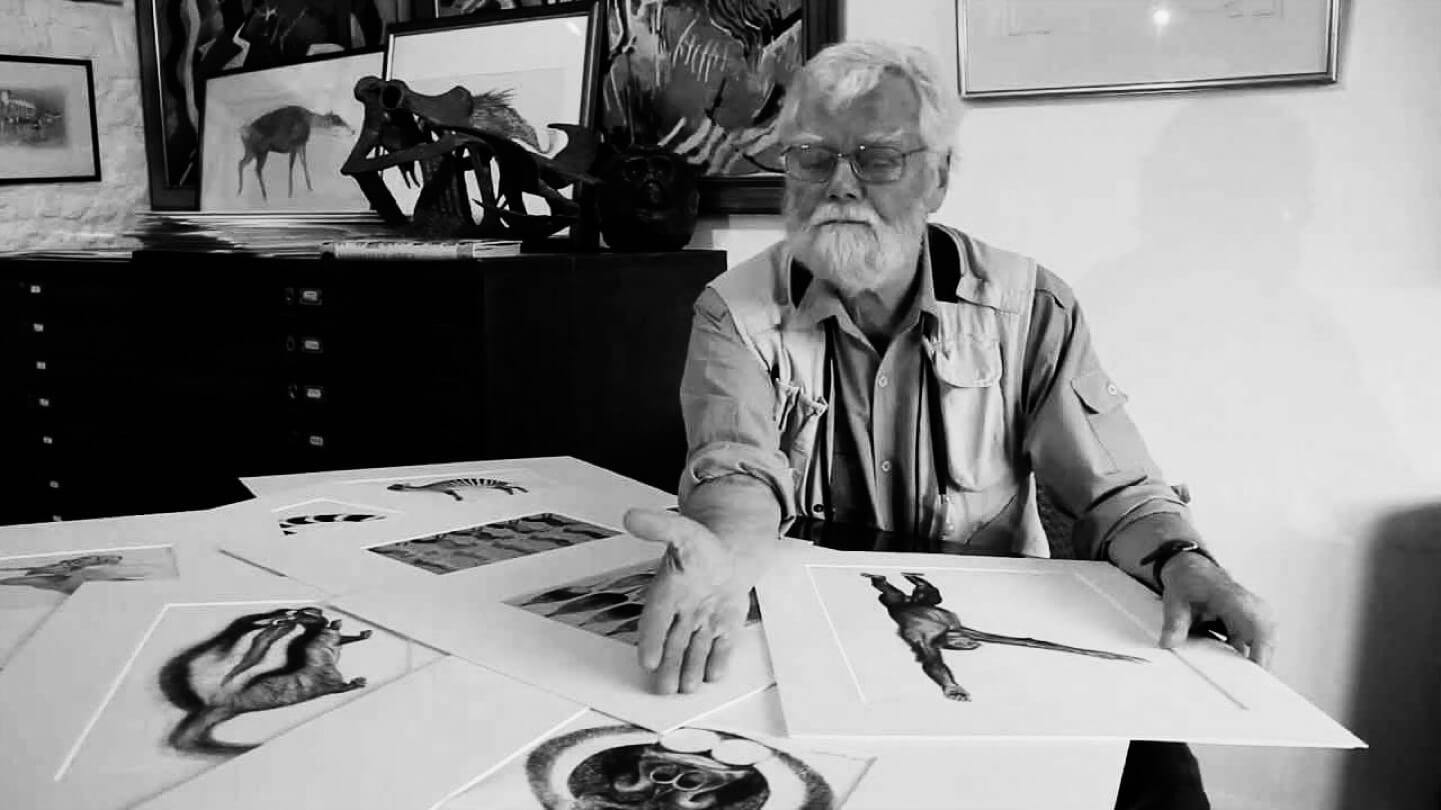 At the Royal Geographical Society in London last week one of the world’s greatest living naturalists, Jonathan Kingdon, was celebrating the publication of his field guide to African mammals, the fruit of four decades of research in the savannahs and woodlands and swamps and deserts of the African continent.

Visible behind him, displayed in a glass case, was a first edition of the account by Laszlo Almásy—published in the 1940s—of the zoomorphic cave paintings of 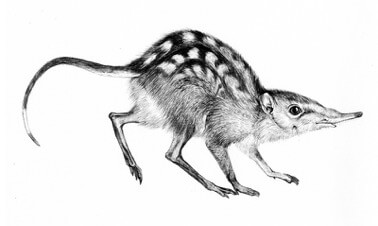 the Sahara. (This is the book that inspired Michael Ondaatje’s novel, The English Patient.) The rock paintings uncovered by Almásy back then are a record of the fauna of tropical Africa millennia ago, when the Sahara was green, a playground for elephants and hippopotamuses. Kingdon’s paintings, on display in the next room, record, by contrast, what endures in Africa in the present day—in the aftermath of desertification and population expansion—in the continent’s remaining wild places. They include arresting representations of monkeys, bats, big cats, rats, rhinoceroses, antelopes and a dozen other orders of warm-blooded vertebrates.

Since the appearance of his seven-volume encyclopedia of East African mammals in the 1970s, Kingdon has become a figure of note in international conservationist circles. His extraordinary gifts as a writer and artist have been dedicated to a detailed record of African fauna and the ecosystems that sustain them. This makes his new field guide rather more than a handbook. It is, indeed, weightier than your average handbook, likely to put your safari jacket out of kilter. But you’ll want to have it with you, not just in the African bush, if you’re going there, but also in the game park and at the zoo. Or watching the Discovery channel.

Or it just might come in handy identifying a certain nocturnal, desert-dwelling, burrowing rodent that lives in a cage in a corner of your house, since Kingdon’s descriptions include fifty-one species of gerbil (not forgetting the pseudo-hamsters and the closely-related jirds). The richness of information in his field guide—both words and pictures—is exemplary. If a lion could read, it would purr. 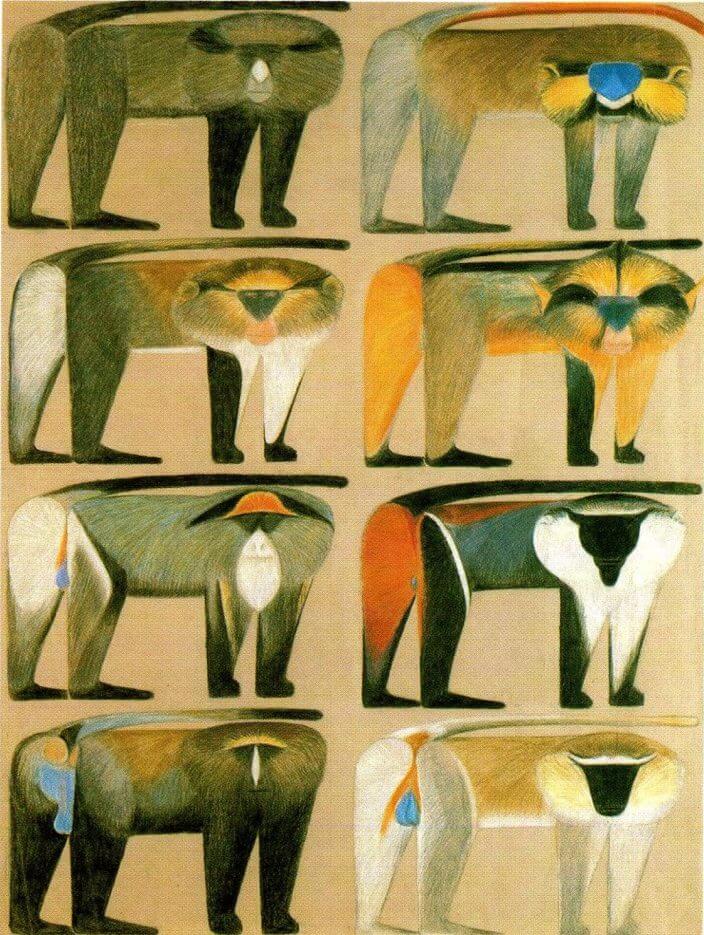 There were praise-singers in plenty at the Royal Geographical Society for the launch of the book. The writer Redmond O’Hanlon, himself an ornithologist by vocation, compared Kingdon to Leonardo da Vinci. He spoke of Kingdon’s “terrible energy” and “shocking verve”. He also drew attention—from a natural-historical point-of-view—to the perfect proportions of the author’s legs, a feature which might be overlooked by those distracted by his equally striking leonine visage and flowing white beard.

It’s one of Kingdon’s strengths, both as a naturalist and as an artist, that he is interested in how animals look and feel to each other—what might be called their intra-specific jizz. His drawings and paintings stress the elegant functionality of  body geometry and the way animals use facial and body patterns for visual signalling. He points out, though, that this visual dimension may not be as important for them as it is for us. For instance, the many species of galago, or bushbaby, are most easily identified by the timbre of their cries. Only if this principle of identification should fail, Kingdon notes, does the taxonomist need to fall back on other characteristics. In the case of bushbabies, this is the varying shape of their penises. 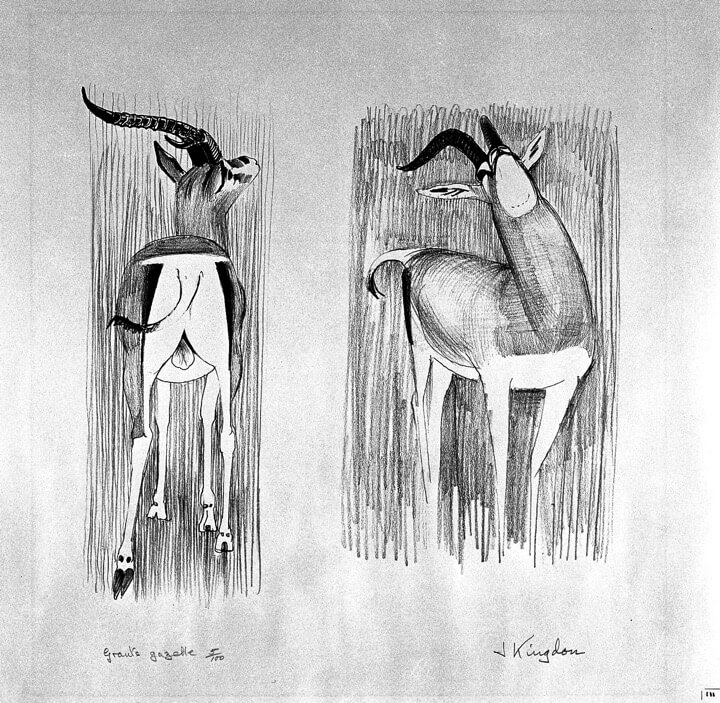 In the animal world, Kingdon stresses, human beings are the sensory equivalent of deaf-mutes, excluded from the realm of scent, the sense which for most other mammals is their position-finder and regulator of their social life–and the source, in his phrase, of their most exquisite sensations.

If only the people who share their habitat could afford to share this sense of wonder. For much of the human population of Africa, the most talismanic animals of the continent are, unfortunately, more a source of food than an object of contemplation.

“As we speak,” Kingdon told the crowd at the Royal Geographical Society, “thousands of cooking pots across Africa are simmering away with cuts of gorilla and chimp in them.”

Standing next to me, Sam Kanyamibwa, from Rwanda, an official of the World Conservation Monitoring Centre, elaborated on Kingdon’s statement.

“In fact where I come from,” he told me, “we don’t eat apes or monkeys. But our neighbours across the border in Congo do. This is a difficult subject. Of course we have to educate children to understand the problem, to change their habits. That’s the long-term solution. But there’s no time left to do this. It is just too urgent.”

These days all celebrations of the natural world are touched with grief, particularly if they dwell on the fate of big animals such as great apes, or elephants, those that zoologists sometimes refer to, with self-mocking scientific gravity, as “charismatic megavertebrates”. The lives of large, warm-blooded creatures are documented by researchers and artists such as Kingdon with increasing sympathy and precision, even as they vanish from the earth. There are fewer and fewer big mammals (apart from humans) and more and more beautiful books about them. Just as the rock paintings in The English Patient bear witness to the former continent-wide distribution of these wondrous creatures, so the maps in Kingdon’s field guide record the catastrophic reduction in the range of each species.

Can an artist-zoologist’s labour of love such as this do anything to arrest the decline? Only if it can help persuade plutocrats and politicians that it is worth the substantial amounts of money and the sustained educational and diplomatic effort it will take to preserve the environment that makes these marvels of nature possible–while enough still remains to provide them with an enduring sanctuary. ★