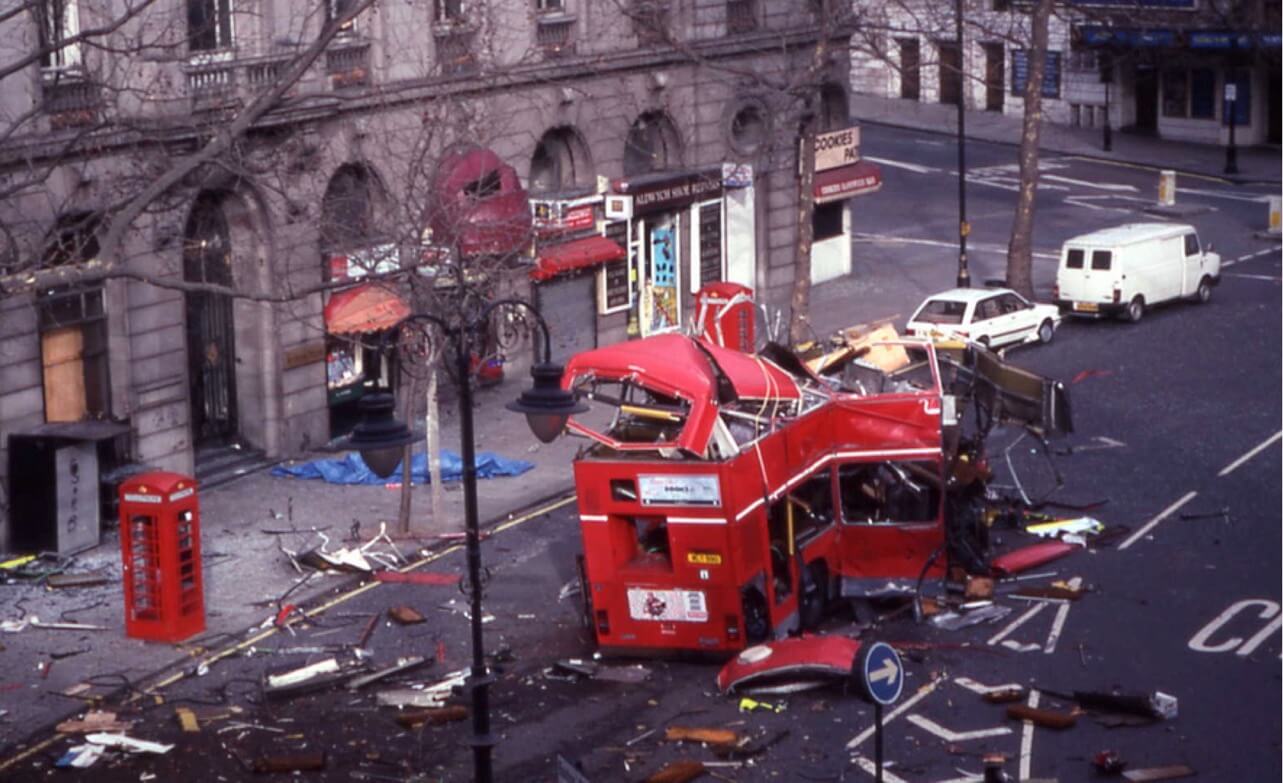 Like ten thousand other Londoners working, or idling, in the borderlands between the City and the West End, I quite often cross the intersection where the Aldwych curves down to meet the Strand, where the church of St Mary-le-Strand rises, ark-like, from the flood of traffic. So I’m familiar with the stretch of pavement where, on Sunday night, the No 171 bus went up in a white flash and a pillar of smoke.

There’s a magazine kiosk and a flower stall and a pair of telephone boxes on the pavement near this spot. A week before, on St Valentine’s Day, the florists were doing a brisk trade selling roses to gallants. Sunday’s blast reduced the magazine kiosk to raw metal and shredded newsprint; and by Monday morning the area had been cordoned off by police, along with the remains of the No 171. The phone boxes, though, were miraculously unscathed: they stood upright in the devastation, not a single pane of glass broken, sex-workers’ calling cards all in place above the handsets.

Alongside the twisted chassis of the double-decker and the ruins of the newspaper kiosk, these phone boxes, modern replicas of Gilbert Scott’s classic design, were a reassuring sight, rouge heralds gardant, icons of a former time, a time when urban terrorism was not yet part of the commuting public’s portfolio of anxiety. Phone boxes like this, they seemed to say, veterans of attacks by vandals and city planners, are not about to let a couple of cack-handed bombers put them out of commission.

In the eerie, traffic-free silence of the Aldwych at dusk, with police spotlights trained on the burnt-out bus and snowflakes settling on parked cars and the hunched shoulders of onlookers, the call boxes seemed to represent a point of light, a principle of order.

It’s a long time since I made a bomb myself (weedkiller and other ingredients, the work of many a foolhardy schoolboy, nearly took my hand off. ) Any interest I have in explosives today is forensic. As it happens I’ve been working recently in Bush House, the headquarters of the BBC World Service, that great pile of Portland stone a hundred yards away from the site of the Aldwych blast—on a series of radio programmes about anti-personnel landmines—victim-triggered booby-traps—the automatic terrorists that haunt every country that has had a war in the last thirty years.

I spent the day after the Aldwych bombing with the producer of the programmes, Nick Rankin, in the depths of Bush House, splicing tape, scripting links between interviews and checking the sound levels on the controlled detonations conducted by ordnance disposal teams that we recorded on a field trip we made to Cambodia last month. On the tape you can hear a warning cry; then comes the blast, and afterwards the rain of earth and shrapnel. The long aftermath is the surprising thing about an explosion. Eyewitnesses of the Aldwych bombing reported that the air was bright for several minutes with tiny fragments of glass.

In Cambodia a landmine explosion doesn’t make the news; farmers are injured and killed by them every day; the whole country is littered with unexploded munitions. Most injuries there are accidents, in the sense that they are caused by mines planted long ago; though some are the result of new terrorist attacks by the Khmer Rouge, who were, notoriously, formerly trained in insurgency by the SAS.

When Nick and I were in Cambodia making the programme we watched specialists from the Mines Advisory Group, a British mine-clearance organization, detonate a Khmer Rouge booby trap laid under a bridge on the road to the capital. Mostly what the mine clearers did, though—day in, day out—was clear agricultural land, inch by inch, with metal detectors and prodders. It’s a strange occupation. After a previous trip, I wrote that walking in a mined area was like being blind.

You enter a world of invisible danger, a magical world of prohibitions and sudden disasters. You are dependent on those whose senses have been extended—by probes, by dogs, by magnetic fields. Following them, you walk lightly, as though the earth, if it detected your presence, might rise up and swallow you. You are vividly aware of gravity, of your own weight, how much it exceeds the few kilograms that would detonate a mine if you stumbled or fell from the safe path. You are blind. And so, of course, are the mines.

I spent last Monday in the studio in Bush House reliving this experience as we worked on the final edit of the radio programme. In the evening, with the sound of distant explosions from Cambodia in my ears, I stepped out of Bush House into the Strand again. The remains of the burnt-out bus were being cleared away. There are, at least, no landmines in the Aldwych; they are not part of the arsenal of the urban terrorist. Not yet, at least. The sense of danger that the IRA sows in the minds of city dwellers is trivial compared to the everyday risks run by people who live in mine-afflicted countries. But it is a version of the same thing: a malediction, a curse, an evil spell. And the response of Londoners and Cambodians is the same: take note, then carry on. ★